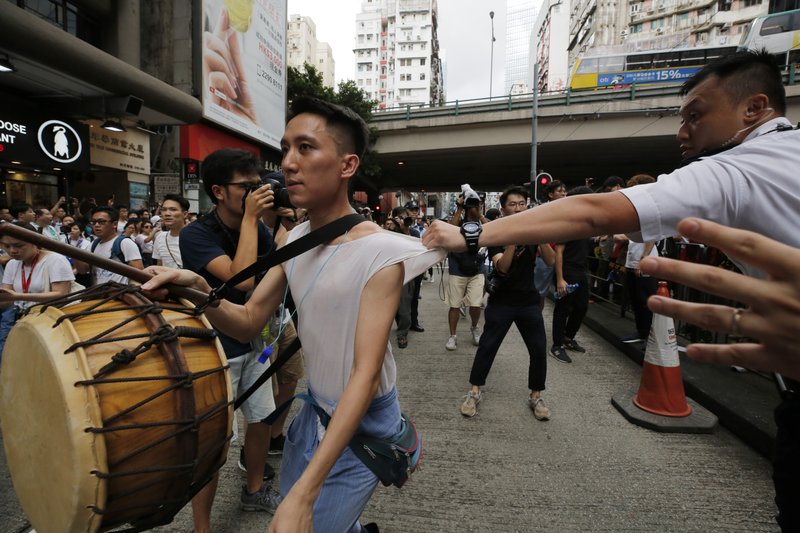 A protester is grabbed by a policeman as he crosses the police line during a rally in Hong Kong on Sunday, June 9, 2019. A sea of protesters marched through central Hong Kong in a major demonstration against government-sponsored legislation that would allow people to be extradited to mainland China to face charges. (AP Photo/Kin Cheung)

HONG KONG -- China's Communist Party will impose a sweeping national-security law in Hong Kong by fiat during the annual meeting of its top political body, officials said Thursday, criminalizing "foreign interference" along with secessionist activities and subversion of state power.

The move is the boldest yet from Beijing to undercut Hong Kong's autonomy and bring the global financial hub under its full control, as it works to rewrite the "one country, two systems" framework that has allowed the territory to enjoy a level of autonomy for the past 23 years.

After steadily eroding Hong Kong's political freedoms, Beijing signaled that the national-security law will be a new tool that allows it to directly tackle the political dissent that hit Hong Kong's streets last year. The monthslong and sometimes violent protests began in June and fizzled out only over public health concerns related to the coronavirus outbreak.

The city's future has become a point of contention in the intensifying rivalry between China and the United States. On Wednesday, Secretary of State Mike Pompeo said Washington was "closely watching what's going on" in Hong Kong. Pro-democracy protesters in Hong Kong have directly appealed to Washington for intervention, frequently waving American flags on the streets, and see themselves as the last bastion of resistance against an increasingly assertive Beijing under President Xi Jinping.

"Beijing has opted for the most risky route," said Ho-Fung Hung, a professor of international relations at Johns Hopkins University. "It will show the world that 'one country, two systems' is, if not already over, almost over."

On Thursday, China made clear that it was asserting control over Hong Kong through "improvement" of its governance.

"We will ensure the long-term stability of 'one country, two systems,'" Wang Yang, head of the Chinese People's Political Consultative Conference, said at the opening of the annual meeting of China's top political advisory body. The meeting is the first part of the Two Sessions political gatherings, which will continue today with the National People's Congress.

Later Thursday, representatives of Beijing's Hong Kong and Macao Affairs Office met with Hong Kong delegates to China's legislature to explain the details of the national-security law. A direct response to last year's protests, the law will ban secession, subversion of state power, foreign interference and terrorism, said Stanley Ng, a Hong Kong deputy to the National People's Congress, who attended the meeting.

The legislation could pass as early as next week and will bypass all of Hong Kong's usual processes.

As news of the proposal spread, calls were issued for more mass protests.

"The arms of tyranny have reached Hong Kong," said Ted Hui, a pro-democracy lawmaker who was a regular participant in last year's protests. "Darker days are coming."

The 20-page report does not signal a shift in U.S. policy, according to a senior administration official, who was not authorized to publicly discuss the report and spoke only on condition of anonymity, but it expands on President Donald Trump's get-tough rhetoric over China's handling of the disease outbreak.

"The media's focus on the current pandemic risks missing the bigger picture of the challenge that's presented by the Chinese Communist Party," Pompeo said Wednesday before the White House released its report.

"China's been ruled by a brutal, authoritarian regime, a communist regime since 1949. For several decades, we thought the regime would become more like us -- through trade, scientific exchanges, diplomatic outreach, letting them in the World Trade Organization as a developing nation. That didn't happen," he said. "We greatly underestimated the degree to which Beijing is ideologically and politically hostile to free nations. The whole world is waking up to that fact."

Later in the day, the State Department announced that it had approved the sale of advanced torpedoes to the Taiwanese military, a move sure to draw rebuke from Beijing, which regards the island as a renegade province. The department said it had informed Congress of the $180 million sale of heavy-weight torpedoes, spare parts, support and testing equipment, which "will help improve the security of [Taiwan] and assist in maintaining political stability, military balance, and economic progress in the region."

Information for this article was contributed by Shibani Mahtani, Anna Fifield, Tiffany Liang, Timothy McLaughlin, Yuan Wang and Carol Morello of The Washington Post; and by Deb Riechmann and Matthew Lee of The Associated Press.