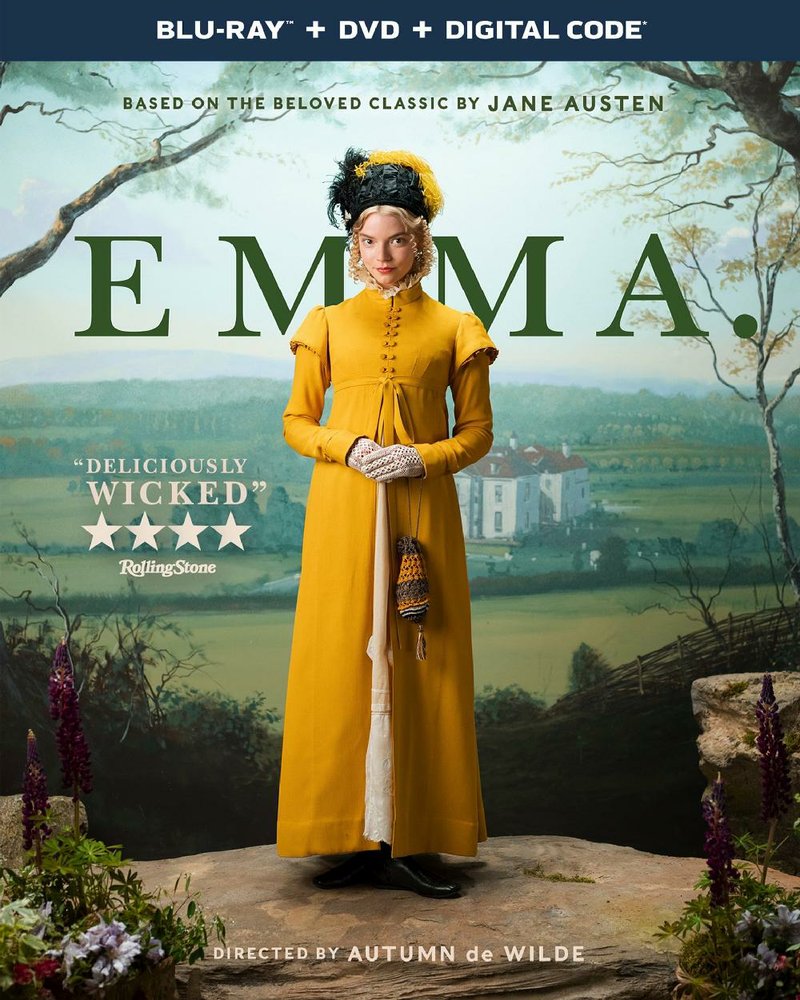 The enduring popularity of Emma Woodhouse, Jane Austen's attractive, witty, stylish, and wealthy aristocrat who enjoys meddling in others' lives, owes much of her fame to the movies. Especially noteworthy is Gwyneth's Paltrow's smartly arrogant portrayal of the character in 1996.

Not to be outdone, the latest version — with a period after the title — offers a sometimes too self-important and overly confident Emma (played with verve by Anya Taylor-Joy, known for her fine work in 2016's The Witch) whose sharp tongue and relentless maneuvering of others sometimes go too far. Not only for those around her but in her own rocky road to happiness ever after.

• Sonic the Hedgehog (PG, 1 hour, 39 minutes) The third film in this live-action comedy franchise for kids affectionately and noisily follows our video game-inspired little hero as he takes on figuring out how best to live on earth with the help of a human friend (James Marsden). Fun times are threatened yet again by evil Dr. Robotnik (Jim Carrey) who's determined to capture Sonic and use his powers for world domination. With Ben Schwartz, Tika Sumpter, Natasha Rothwell; directed by Jeff Fowler.

Wildlife (PG-13, 1 hour, 45 minutes) Fine performances elevate a simple character-driven screenplay concerning what happens when 14-year-old Joe's golf-pro dad heads out of their small-town home in 1960s Montana to battle a raging forest fire nearby, leaving the kid and his mom (Carey Mulligan) on their own. With Ed Oxenbould, Jake Gyllenhaal, Bill Camp; written and directed by Paul Dano.

◼️Onward (PG, 1 hour, 42 minutes) Set in a suburban fantasy world, this sweet, family-friendly Pixar-animated adventure involves two teenage elf brothers who dedicate themselves to discovering if there is still magic in the world around them. With the voices of Tom Holland, Chris Pratt, Julia Louis-Dreyfus, Octavia Spencer, John Ratzenberger, Tracey Ullman, Mel Rodriguez; written and directed by Dan Scanlon.

◼️The Way Back (R, 1 hour, 48 minutes) A overused and predictable story gets a boost from a powerful performance by Ben Affleck as a widowed former basketball all-star who, after struggling with addiction, seeks to make amends for his past by coaching an ethnically mixed high school basketball team at his alma mater. With Janina Gavankar, Hayes MacArthur; directed by Gavin O'Connor.

◼️Promare (PG-13, 1 hour, 51 minutes) A thrilling adult anime adventure in which a group of mutants capable of controlling flames destroy half the world with fire. Then an aggressive group called Burning Rescue attempts to stop them. With the voices of Ken'ichi Matsuyama, Ayane Sakura, Rikiya Koyama; directed by Hiroyuki Imaishi.

◼️Buffaloed (not rated, 1 hour, 35 minutes) A chaotic, fast-moving comedy which has its moments. After getting accepted to her dream college and realizing that she doesn't have the means to pay tuition, Peg Dahl, who will do just about anything to get away from blue-collar Buffalo, N.Y., fearlessly hustles her way into the seamy world of debt-collecting. With Zoey Deutch, Judy Greer, Jermaine Fowler; directed by Tanya Wexler.

◼️Downhill (R, 1 hour, 26 minutes) It doesn't come close to Force Majeure, the subtle 2014 Swedish comedy that inspired it; Downhill struggles for laughs in the story of a family on a ski vacation in the Alps facing the consequences of cowardly actions following an avalanche. Hint: Don't watch Force Majeure first. With Will Ferrell, Julia Louis-Dreyfus, Zach Woods; directed by Nat Faxon and Jim Rash.