Solid hour of laughs in Patton Oswalt: I Love Everything 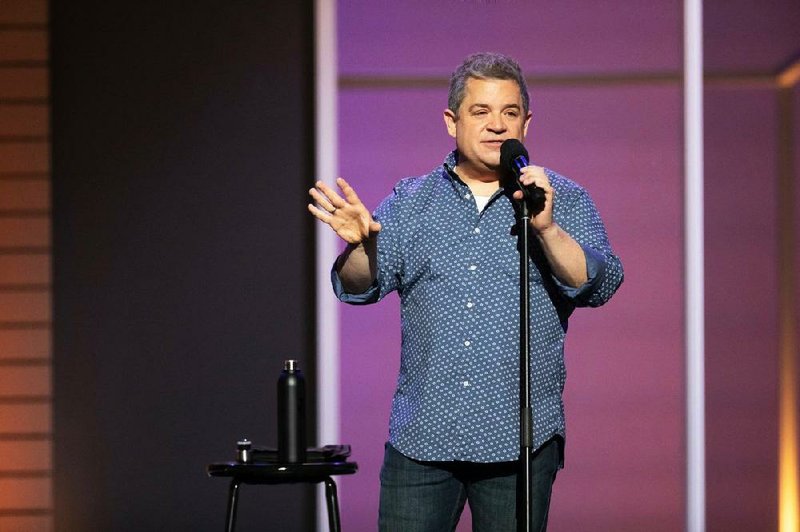 Allow me the film cliché of starting the review at the end of the comedy special. You know the trope. The movie starts out with a terrible situation for the main hero, and he/she says something like, "I bet you're wondering how I got into this mess." After the special went off, my wife said, "We should watch more stand-up specials." And I don't disagree.

I like stand-up comedy and appreciate the performance art for what it is. But I'm picky. Humor is subjective, but I have 10 times more subjectiveness than the average bear.

Please don't mistake me for a prude, but I've got certain things I don't like to listen to for an hour or two. If a comic wants to throw in a sex joke or two, fine. But I don't need extended bits about other people's bits. And cursing is fine, but just make sure there's a point to it. Saying "damn it" or dropping an f-bomb alone isn't a joke. Saying it in response to something else might be. And if your material is going to get into homophobic or racist territory, it's not for me. I'm not the "PC police." I just know what I dislike.

Patton Oswalt (who stars in a new Netflix special, Patton Oswalt: I Love Everything) is a genuinely funny guy who has seen more than his fair share of tragedy. For him to come back into life and make others laugh after his wife, journalist Michelle McNamara, died in her sleep, is beyond powerful. I just admire the heck out of him for being able to stand on a stage and make me laugh after that tragedy. And for him to complete her book, I'll Be Gone in the Dark, is an almost unmatched act of dedication and love.

I can actually remember growing up and watching Oswalt on The King of Queens. Coincidentally, that was also one of the last times I found Kevin James to be funny (be honest, Hitch was more about Will Smith). Oswalt would go on to lend his voice to cartoons I loved like Kim Possible and Batman Beyond. He also played a constable named Bob in Justified, which is one of my favorite television shows of all time.

I've known the actor through all these different roles (even on the cartoon We Bare Bears), and still, I had yet to watch any of his stand-up specials before tackling his Netflix special I Love Everything this week. Even though he won an Emmy for the one he performed in 2016 (Patton Oswalt: Talking for Clapping). So I really didn't know what I was going to be in for.

My favorite stand-up comedian of all time is John Pinette, may God rest his soul. I could just listen to his bits about camping in Maine and Chinese buffet adventures forever. You want to know what John Pinette has in common with Patton Oswalt? They both had small parts on Seinfeld.

To Oswalt's credit, the man touches on a wide variety of topics in an hour (and six minutes). He opens on a bit about how his breakfast cereal has gotten drab and boring since turning 50 and hits on everything from getting remarried to working as a wedding DJ to Denny's (we'll get there).

The stand-up special has that same movie trope I opened this review with. Oswalt has a snippet from his Denny's bit at the start, and then immediately jumps back in time with the words "52 minutes earlier." All that's missing was the record scratch sound effect. It seemed a little strange to me. But hey, it's his Netflix special. The man can open it how he chooses.

One of the most refreshing things about Oswalt's performance was how grateful he was to the audience. I have no idea what the celebrity is like in real life. He seems like someone that would be cool to grab a beer with (unless you're a subcontractor). But he must have stopped to thank the audience three or four times throughout the special. Call me old fashioned. I like a little humility.

The range Oswalt had from hilarious to genuinely touching was impressive. And that again comes partially from the passing of his first wife. You probably don't expect a stand-up comedian to have an inspirational moment that touches your heart, but God bless Oswalt, he really did.

He goes from crazy quotes like, "If any of you do meth, do it now" and saying subcontractors are like having a "Suicide Squad for your house," to describing his new wife as a "poem of a woman." And he told his audience to run at love if you see it. Oswalt also said being married was the best and was so sweet when he talked about how enthusiastic he was about having Daddy/Daughter dates with his kid. You know, before she becomes a teen who hates his music.

And sure, he was blunt (extremely so) about his daughter's second-grade art show. But the man legit missed being invited to a Star Wars film premiere. So he's allowed to dump on his child a little, while also showing just how loving of a father he really is. There was a genuine honesty and wholesomeness to Oswalt's performance that I just don't see in too many stand-up comedians.

Those heartwarming moments came from the same man who spent a few minutes on a bit about self pleasure. That's probably my biggest criticism of the special. I'll give the man points for realizing how significant it is to be raising a daughter in the #MeToo era, but using that as a segue into a prolonged bit about a sex act was the weakest part of his comedy routine. Again, I know what I dislike. And listening to Oswalt discuss a sex act for five minutes is something I don't like.

And yet, when you contrast it to his earlier bit about sex with someone in shape versus sex with a "comfy beanbag" of someone in their 50s, it's clear the man can make me laugh while talking about sex. There's just a limit to how much I want to hear him discuss it.

Of course, once he finished his bit on self-pleasure and went into his unrelated "theory on Jesus," while bluntly admitting there was no possible way to segue those topics, he was hilarious again.

I noted earlier in the review humor is subjective. So of the millions of people who will view this special, some will find the self pleasure bits hilarious and my favorite jokes to be unfunny. And that's perfectly fine. Laughter is sometimes unpredictable.

With that said, I think my favorite portion of the stand-up was the semi-threatening note his new bride left on his windshield after they had a fierce argument. I won't spoil it here, but everything from his disclaimer that it was "done out of love" to his voice as he read the note just slayed me. It's his strongest piece of the performance.

I really did have a great time with this special. It was a solid hour of laughs. Oswalt got out on stage, ran his material, and was gone before he overstayed his welcome. That's a valuable skill for stand-up comedians. Some folks have two-hour Netflix specials when they'd be better off having five minutes of open-mic night at their local club. Oswalt got 66 minutes of material and performed it with a genuine joy that even Marie Kondo would have to hang onto.

Bob Rubin takes the stage after Oswalt, and I admit, I haven't watched it yet. But his inclusion makes the special into two episodes.

My final note is to Denny's. For the love of The Grand Slams, please allow Oswalt to make you a 30-second commercial. As a woman who has spent countless late evenings in your fine dining establishment, you need Oswalt's talent for your next ad campaign. And to you, Patton, you're welcome. Few people get endorsements from a powerful film columnist like myself.

Print Headline: Solid hour of laughs in Patton Oswalt: I Love Everything