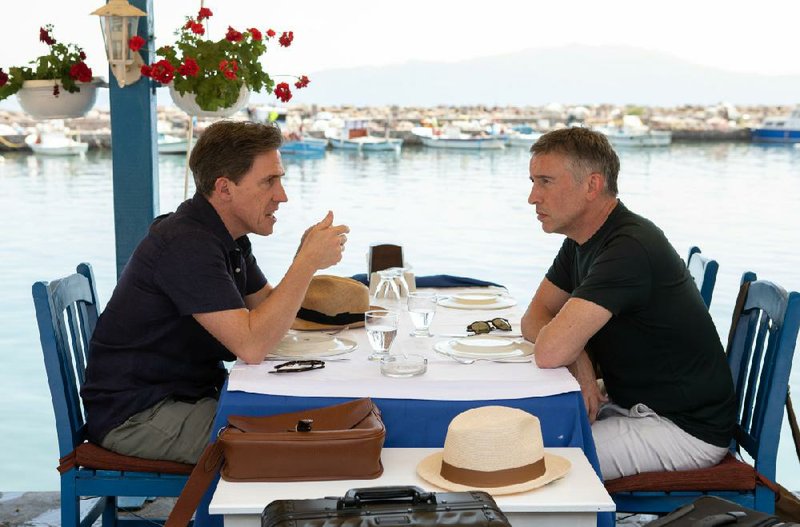 Rob Brydon (left) and Steve Coogan play stylized versions of themselves in Michael Winterbottom’s The Trip to Greece, the fourth (and presumably last) in a series of films that had them gallivanting all over the continent in search of great food and stimulating conversation.

The Trip to Greece is not, as some persist in believing, a nonfiction film.

Maybe knowing this kills something in the audience member trying to generously receive it. It would be more fun to imagine Steve Coogan and Rob Brydon are just like this -- witty, urbane and spontaneous raconteurs. (Though they are exactly that, they increase it a bit for the sake of the show.) It would be more fun to imagine that director Michael Winterbottom's role here is simply to turn on the camera and cut out the sluggish bits. For this is how life should be -- all sparkling and gustatory adventurism, touring the Michelin-starred outposts of a foreign land with your finest frenemy, not holed up in the house trying to figure out Google Hangout.

The Trip to Greece

It's not. The Trip to Greece, like its predecessors, is more like Curb Your Enthusiasm or Maron, the IFC show loosely based on the life and career of Marc Maron, than anything Albert Maysles or D.A. Pennebaker ever shot. This is not (just) a travelogue.

If you are not up to speed with The Trip series, then this fourth and allegedly final (though we should never consider a franchise killed off until Joel Schumacher has been summoned) installment of the series might be a little slippery. It's about Coogan and Brydon playing characters named, respectively, Steve Coogan and Rob Brydon, film and TV actors of certain status, traveling around, eating in expensive restaurants and bantering with each other. They show off an impressive array of impressions, argue, and attempt to humiliate each other. In other words they are guy friends.

In 2009's The Trip, they toured restaurants in the north of England, at the behest of a British newspaper. It was like a scam in that they ate a lot of delicious meals. The entirely (I guess) fictional subtext was that Coogan, a slighter bigger star than Brydon, was unhappily single while Brydon was happily familied up. In the second installment, they do basically the same thing in Italy; the third movie is set in Spain.

I like all these movies, though it is a measure of the mildness of my fandom that I've never checked out the BBC television series from which they were pared. (The first three series, each consisting of six 30-minute episodes, are streaming on Netflix.) On the other hand, a decade ago my wife watched about an hour of the first movie, turned to me and said, "This isn't very good."

I get that. Funny is a divisive concept; something upon which reasonable people can disagree.

For instance, some people don't like Will Ferrell or Adam Sandler movies. I generally don't, though I've seen both those actors give very good performances; there's something in their most popular work that I don't appreciate. I don't think it has much to do with how high or low the purported comedy is pitched -- plenty of smart and cultured people enjoy the Three Stooges -- it's just that we have a very particular set of sensibilities and there's not a lot we can do about our involuntary responses to certain stimuli. (I sometimes catch myself thinking "that's funny" in lieu of laughing. From a stand-up comedian's point of view, I mightn't be a great audience member.)

So, it says nothing about my wife -- or for that matter Messrs. Winterbottom, Coogan and Brydon -- that she finds the whole thing slight and self-indulgent. The films are a little smug and inside baseball-ey, to the point that I'm not sure that anyone who isn't already familiar with the Coogan-Brydon dynamic -- which was established back in Winterbottom's 2005 movie Tristam Shandy: A Cock and Bull Story -- will be able to make much sense from this installment, which runs a little darker than the others.

There's plenty of what, were we considering a superhero fantasy, we might call fan service here, and if you've been around for the duration you'll probably appreciate how Coogan and Brydon have been able to resist collapsing in sweet bonhomie -- they are still prickly and precise in their jabs; they know how to hurt each other while at the same time protecting themselves.

But, everyone here acknowledges its formula, a kind of expensive account scam. And maybe it's not something grown men should want to keep doing year after year, even if you can dress it up as a retracing (in six days) of Odysseus' 20-year journey.

"What would you say is the thing you're the most proud of?" Brydon asks Coogan at one point.

"My seven BAFTAs," he immediately replies.

"For me, it would be my children."

"Yeah, well, 'cause you haven't got any BAFTAs."

"Though you have got children, which is interesting."

That's the gist of the relationship, though there are moments of grace. Brydon is almost kind when he admits Coogan looks better, like "Richard Gere," now that his hair has gone almost completely gray. "You were unpalatable as a young man," he says. And there's a nice discussion of Coogan's performance as Stan Laurel in 2018's Stan & Ollie, which leads to a bit of amusing schtick about the teaming of Stan Laurel and Tom Hardy (who the pair worked over rather thoroughly in The Trip to Spain).

The impressions come fast and furious. They deconstruct Dustin Hoffman's voice in deeply interesting and competitive fashion, cast Ray Winstone as a cockney Henry VIII, play Mick and Keef in hospital after the Stones' singer's recent heart surgery, and generally display tossed-off virtuosic gifts of mimicry and timing. It's dazzling. It's very funny.