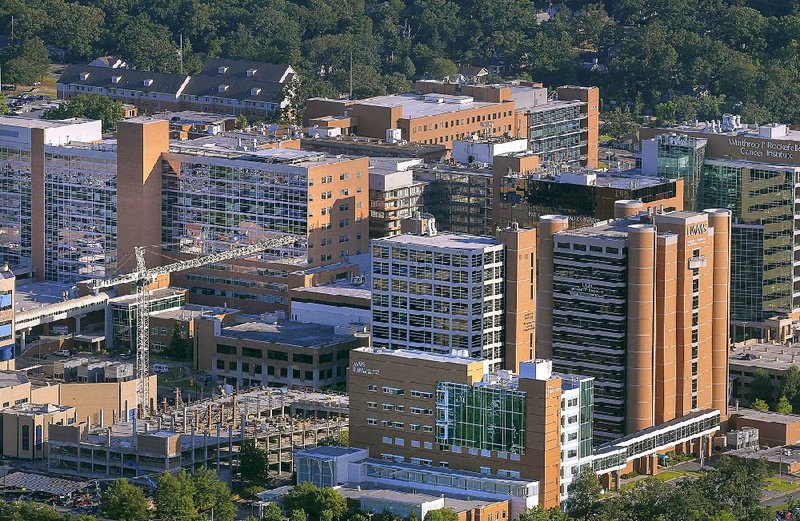 The University of Arkansas for Medical Sciences anticipates a deficit of more than $45 million for the upcoming academic year, according to a budget approved by trustees Thursday.

The budget for the fiscal year beginning July 1 reflects strain across the UA system and a double whammy for the state's only academic medical center. As both a higher-education site and a health provider, it's experiencing the pressures felt by both in the coronavirus global pandemic.

"It'll take a little while to ramp back up where we were prior to covid-19," Amanda George, the chief financial officer, said in an interview after the trustees' meeting. The "key thing," she added, will be restarting clinic visits and procedures to generate revenue.

Hospitals around the country have said they're losing money as they canceled services and patients stayed away during the virus outbreak. A summary of UAMS' budget predicts those effects will last into the first quarter of next year.

George said officials plan to reevaluate their finances every quarter, but acknowledged the impact could be "much worse" if the outbreak surges later this year.

"We'll just have to monitor it, I think, going forward -- and adjust accordingly," she said.

Trustees approved next year's budget with little discussion or acknowledgment that it marks the first major losses at the academic medical center since a period of financial distress in 2018.

That culminated in a projected $72 million deficit and layoffs of hundreds of employees. Since then, UAMS has balanced its books, added back staff members and boosted compensation.

The university also has pursued projects expected to generate long-term savings, such as a $156 million effort -- financed through a bond issue -- to renovate and build a power plant to save energy costs at the Little Rock campus.

For the upcoming year, George said officials are committed to leaving recent wage increases in place. To offset the expected financial stress, they plan to look for supply-chain savings, such as making sure they get the best price for items, and federal funding opportunities.

Overall, UAMS is projecting a 4% increase in operating revenue, including a $20 million increase in grants, for a total of $1.6 billion. Operating expenses will grow by almost 7%, to $1.7 billion, according to budget documents.

Next year's budget also includes an $11.6 million increase in state appropriations marked for UAMS' pursuit of National Cancer Institute designation. It would be the first center with that status in the state.

At a special meeting earlier this month, trustees pushed back on a proposal for UAMS executives to take a 20% pay cut because of the dire conditions caused by the coronavirus pandemic. But by meetings Wednesday and Thursday, the board had reversed course.

On salary, "clearly we have to defer to [the] chancellor and his people. It is what it is," trustees' chairman John Goodson said.

George said while some staff members took a temporary reduction in hours in recent months, those executive salary cuts ultimately weren't incorporated into the 2020-21 budget.

In a presentation to trustees the day before budgets were approved, UAMS Medical Center chief executive Steppe Mette recounted measures the hospital took to prepare for a potential surge of coronavirus patients.

Those included transforming a 60-bed area into a covid-19 unit with double its former capacity, buying new testing machines and 80 ventilators, investing in telemedicine, staffing an emergency center, retraining employees and other tasks.

During that time, roughly 900 employees -- close to 10% of the system's workforce -- have had to be quarantined because of possible exposure. UAMS also provided food and medicine to those workers.

While officials had conducted tabletop exercises for hurricanes, large fires and other disasters, they "never really imagined" they'd face this sort of sustained emergency, Mette said.

Board members Thursday also approved plans to select a contractor for a $25 million project to build a new radiation oncology center at the UAMS campus and solicit designs for a proposed $80 million surgical annex.

"We are not seeking financing for these projects, nor are we planning to break ground on these projects," he said. Officials will return to the board at a later date to discuss paying for the initiatives.

Christina Clark, vice chancellor for institutional support services and chief operating officer, said it will be well into 2021 before officials expect to see a completed design for the surgical annex.