For Joanna Gaines, home is the heart of a food and design empire built with husband Chip by Julia Moskin The New York Times | May 23, 2020 at 1:45 a.m. 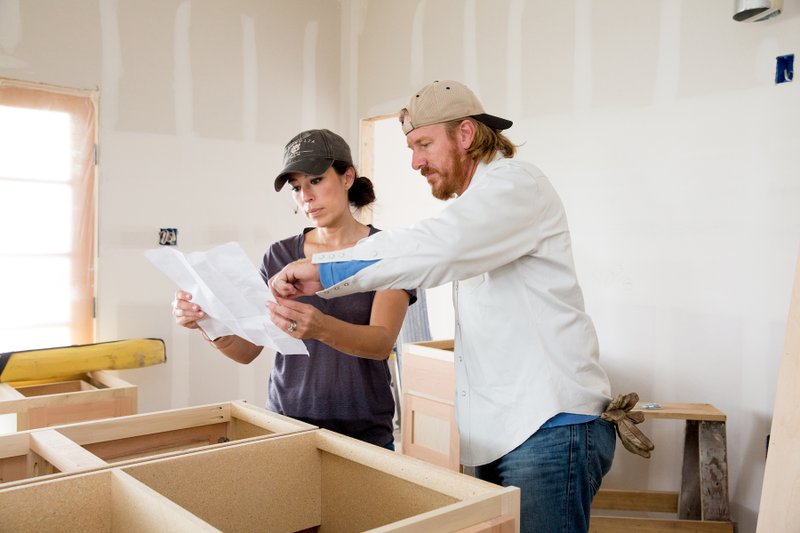 Chip and Joanna Gaines discuss cabinets while working on a home. The Gaines's home design work seems to divide along traditional gender lines, but Joanna is the driving force behind the brand. (Magnolia via The New York Times)

The first Chip Gaines heard of avocado toast was in 2017.

He and his wife, Joanna, were about to open a 200-seat restaurant in downtown Waco, Texas, where their home design and construction business is based. The family pancake recipe was locked in, and the biscuits and gravy were good to go by the time Joanna Gaines mentioned adding a vegan option to the breakfast menu.

"That's disgusting, babe," Chip Gaines told her, shaking his head. "No one wants avocado on their toast."

She persisted. She also suggested a juice bar.

In the end, as fans of the couple's popular home makeover show, Fixer Upper, will be unsurprised to hear, Joanna Gaines prevailed. Magnolia Table opened with avocado toast on the menu and has added chai latte and a $12 "juice flight" alongside basics like sweet tea and blueberry muffins.

In just seven years, since Fixer Upper began airing on HGTV, the couple has renovated more than a hundred houses and expanded the Magnolia brand into restaurants, craft markets, books, villas, real estate agencies, furniture, a magazine, a Target brand and -- coming up shortly -- their own cable channel, the Magnolia Network.

Their continuing negotiation between Texas tradition and modern taste makes for good television and has also proved to be a wildly popular approach to home design, beloved by millions of followers on Pinterest and Instagram. In their hands, there is no house too small, too dark or too old to be transformed with topiaries (formerly known as houseplants), giant clocks, ironwork and white shiplap into her signature bright style, best described as Boho-Glam-Industrial Farmhouse.

That's the aesthetic at the couple's own home, a Victorian-era farmhouse set on 40 acres outside Waco that makes frequent appearances on the show. They live there with their five children, ages 1 to 15.

Part of the appeal of Fixer Upper, which drew more than 16 million viewers a week in its final season in 2018, is seeing that spark of tension play out in their marriage. In the tradition of Lucy and Ricky Ricardo and Homer and Marge Simpson, there's one impulsive, enthusiastic risk-taker (Chip, 45) and one sensible, occasionally

exasperated realist (Joanna, 42). And it takes both kinds to transform a business into an empire.

Joanna Gaines has said that she started as a kind of "gofer" for her husband's real estate business, Magnolia Homes. (He started flipping houses in Waco soon after graduating from Baylor University.) At first, she trawled antique markets and yard sales to decorate the houses that he was renovating; she then taught herself digital design so they could completely rebuild older houses with the modern, bright interiors she favored.

Although their work seems to divide evenly, along conventional male and female lines, it's clear that her taste and vision (not to mention her snappy confidence and great hair) are the main drivers of the brand and its legions of female fans.

"They are a couple who respect tradition and one another, and aren't afraid to show their Christian faith," said Lindy Baker, a teacher who lives outside Kansas City, Mo. "She is proud of being a wife and mother, and you don't always see that on the cooking shows."

In a Zoom interview from home last month, Joanna Gaines sounded like many parents who are currently working while attempting to be full-time educators, cheerleaders and cooks: frazzled.

"I had to get off social media for a while, so I made a full Texas dinner," she said -- chicken-fried steak, mashed potatoes and zucchini casserole. "It took three hours to make and it was gone in 10 minutes."

Gaines didn't build her reputation on her home cooking, and when Fixer Upper premiered in 2013, she looked like no one's idea of a Southern design queen, with her Birkenstock sandals, wardrobe of jeans and T-shirts and charcoal-gray manicure.

Her mother is Korean, and her father's heritage is Lebanese: She slipped recipes for bulgogi and Lebanese salad into her first book alongside pimento cheese, chili and no less than eight breakfast casseroles. It has sold more than 2 million copies and was the No. 2 best-selling cookbook in the United States on this week's New York Times list -- behind her new cookbook, published last month. (Her 2018 design book was also No. 1 and has a prescient title: Homebody: A Guide to Creating Spaces You Never Want to Leave.)

With no formal training or experience in design, decorating or cooking, she has felt her way into the domestic zeitgeist and become a star -- and the first Asian American woman to have a mass-market "lifestyle" brand.

"She's like a Texas version of Martha Stewart and the Barefoot Contessa but younger and more relatable," said Candace Fife, a fan who started a Facebook group for cooks to post photos and notes on the Magnolia Table cookbooks. It has added nearly 1,000 members in the last two months, as home cooking has become a national necessity.

DOMAIN OF THE HOUSE

There is not much that is aspirational about the food in her books, but much that is inspirational, especially in the photographs of Gaines herself, of the children doing wholesome farm activities in muddy boots, of her cottage garden and white-tiled open kitchen. (In the Fixer Upper universe, and at their home, the kitchen is the domain of the lady of the house.)

Homely dishes like hash-brown casserole and peanut-butter brownies are presented against pure white and linen backdrops; some dishes are spilling over, or slightly over- or undercooked.

"It all looks very natural, like she does," Fife said. "I think people relate because her food is not pretentious, it's not for the elites, it just brings people together."

Both of Gaines' cookbooks are subtitled A Collection of Recipes for Gathering, and giant dining tables, open floor plans and family meals are a big part of the Magnolia brand.

Without the possibility of actual gatherings at the moment, she said, she is focusing on cooking from scratch and trying to enjoy the freedom to cook for hours instead of rushing to get dinner on the table after work.

It's a good thing she has five children, she said. "It means we can still have a big family dinner, even under quarantine."

Here are two of her recipes.

In a large skillet, cook the bacon over medium-low until crispy, 8 to 10 minutes. Transfer the bacon to a plate lined with paper towels and set aside. When cool enough to handle, roughly chop bacon.

Pour off all but 2 tablespoons of the bacon grease from the pan. Heat the skillet over medium, add the onion, and saute until soft and lightly browned, 2 to 4 minutes. Add the kale and garlic and saute until the garlic is tender and fragrant, another minute. Remove from the heat and stir in the chopped bacon.

Stir the kale mixture into the eggs, then pour into the buttered dish. Top evenly with the remaining mozzarella and Gruyere. Cover with foil.

Bake for 45 minutes. Remove the foil and bake, uncovered, until the top is lightly browned and bubbly, another 15 minutes. Serve hot. (Cooled casserole will keep, covered, in the refrigerator for 3 to 5 days.)

Heat oven to 350 degrees. Coat a 9-by-13-inch pan lightly with cooking spray and line it with parchment paper, leaving a 2-inch overhang on the two long sides.

In a small saucepan, heat the butter and cocoa over low heat until the butter melts, about 5 minutes. Whisk to combine then set aside to cool, 5 minutes.

In a stand mixer fitted with the paddle attachment, combine the sugar, flour and salt. Add the butter mixture and beat on medium speed until well blended, 1 to 2 minutes. Add the eggs one by one, incorporating each before adding the next, then add the vanilla and mix until combined.

Spread the mixture evenly in the prepared pan. Bake until a tester inserted into the center comes out with a few moist crumbs, 20 to 25 minutes.

Place the peanut butter in a microwave-safe bowl and microwave until softened, about 15 seconds. Stir it well to distribute heat evenly then spread it in an even layer on top of the brownies. Freeze the brownies for at least 30 minutes.

In a medium saucepan, melt the butter and marshmallows over medium heat, stirring often, until both are melted and no lumps remain, about 5 minutes. Add the confectioners' sugar, milk and cocoa, and whisk until smooth, about 2 minutes.

Spread the frosting over the peanut butter layer and freeze for 30 minutes.

Remove the brownies from the pan: First, cut the brownies away from the pan edge on both short sides, then lift them out using the parchment paper handles. Cut into 24 squares. Keep refrigerated. 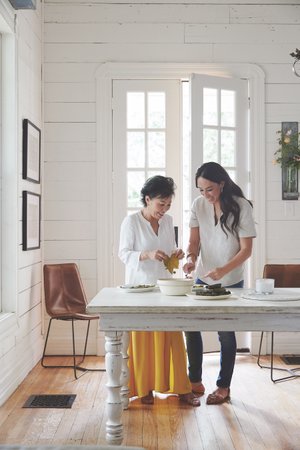 Joanna Gaines, right, and her mother, Nan, stuff grape leaves. Gaines's mother left Korea when she was 19 to marry her father, Jerry, an American serviceman. (Amy Neunsinger via The New York Times) 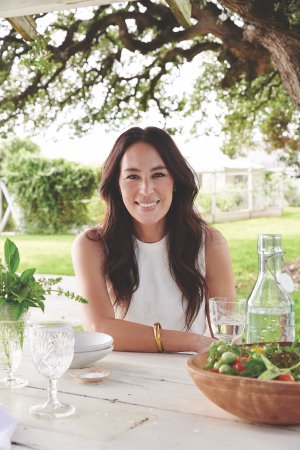 Joanna Gaines and her husband, Chip, the co-stars of "Fixer Upper," have married Texas tradition with modern taste to create a wildly popular brand. (Amy Neunsinger via The New York Times) 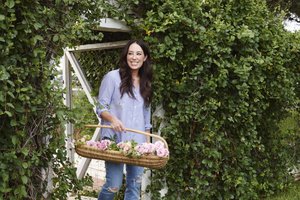 Joanna Gaines in her garden. (Amy Neunsinger via The New York Times) 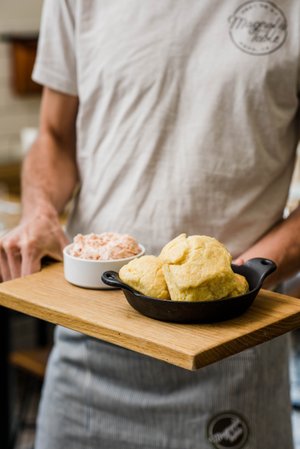 Joanna Gaines's signature fluffy biscuits styled with a side of strawberry butter. (Magnolia via The New York Times)