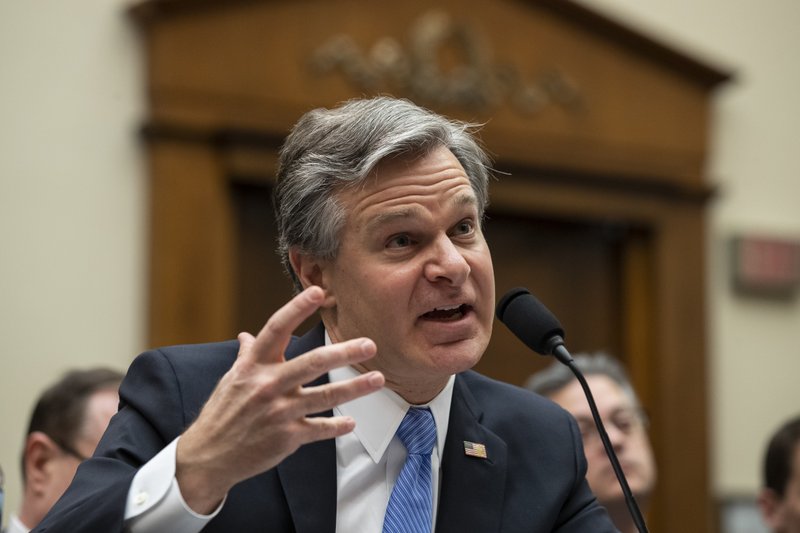 The review, which will be handled by the FBI's inspection division, will seek to "determine whether any current employees engaged in misconduct" and evaluate broader FBI policies and procedures to "identify any improvements that might be warranted," the bureau's statement said.

The review is unusual, particularly because Attorney General William Barr already had commissioned St. Louis U.S. Attorney Jeff Jensen earlier this year to examine the handling of Flynn's case. The statement said the FBI's review would "complement" that work, and Jensen's examination would take priority.

"I don't know what the point is, other than to appease the attorney general," Gregory Brower, a former FBI official who served under Wray, said of the new review. "There's a pattern of wanting to be able to say certain things are being investigated."

President Donald Trump has complained publicly about Wray for "skirting" the debate about the FBI's 2016 investigation of possible coordination between Russia and the Trump campaign to influence the election, of which the Flynn case was a part.

People close to the president have said he does not seem inclined to fire Wray, and Barr has publicly defended the FBI director, calling him "a great partner to me in our effort to restore the American people's confidence in both the Department of Justice and the FBI."

Trump appointed Wray as FBI director in 2017, and he is supposed to have a 10-year term to keep his position insulated from politics.

"It's disappointing," Trump told Fox News earlier this month when asked about Wray's role in ongoing reviews of the FBI's handling of the Russia investigation. "Let's see what happens with him. Look, the jury's still out."

Trump has pushed for criminal prosecutions of those involved in the case. The FBI noted it "does not have the prosecutorial authority to bring a criminal case."

While the FBI said current employees could face discipline, most of those involved in the matter who have drawn the president's ire, including former FBI Director James Comey, former Deputy Director Andrew McCabe and former counterintelligence agent Peter Strzok, are no longer employed there.

"As for former employees, the FBI does not have the ability to take any disciplinary action," the bureau's statement said.

Flynn pleaded guilty in 2017 to lying to agents about conversations he had with a Russian diplomat. Trump had fired him as national security adviser for lying to the vice president about the same thing. But as he awaited sentencing, Flynn changed legal teams and sought to undo his plea, alleging a host of misconduct, including that he was entrapped by the FBI agents who interviewed him.

At Jensen's recommendation, the Justice Department this month asked the court to throw out the case entirely, saying agents did not have a good reason to interview Flynn in the first place. Two FBI agents had been detailed to Jensen's team, and officials said there had been discussions about an internal FBI review after he made his recommendation to drop the case.

The department's move has proved controversial, with many legal observers asserting that Barr seemed to be trying to help a friend of the president. A career prosecutor assigned to the case withdrew from the matter before the department changed its position. But many on the political right hailed the move, and Trump praised the attorney general.

The case is now mired in complicated legal proceedings.

"Everything about this case is unusual," said David Sklansky, a Stanford professor of criminal law. "It's unusual to ask a higher court to direct a lower court to do something before the lower court has had a chance to make up its own mind in the first instance -- and that includes whether to dismiss a case."

After U.S. District Judge Emmet Sullivan appointed a retired judge to oppose the Justice Department's position and consider whether Flynn could be held in contempt of court, Flynn's legal team asked an appeals court to intervene. A three-judge panel Thursday ordered Sullivan to explain his actions.

Should the panel issue an order to Sullivan that he drop the Flynn charge without further consideration, it would not necessarily be the end of the matter, say Sklansky and another criminal law professor, Samuel Buell of Duke University.

For one thing, they said, Sullivan is likely to appoint a lawyer to represent him before the appellate panel, and that lawyer could ask the full appeals court or the Supreme Court to reverse any order shutting down his review.

Sklansky also said it would not necessarily take a decision by Sullivan to push the matter further. He pointed to a rarely invoked rule that permits the full appeals court to order a rehearing on its own, without any petition, if the judges deem the matter to involve "a question of exceptional importance."

On the other hand, if the three-judge panel decides against issuing an order to Sullivan -- or is overruled by the full court -- Flynn's legal team can appeal, too.

The immediate intervention the Flynn team is seeking -- called a writ of mandamus -- is disfavored and is supposed to be reserved for rare occasions "when a judge is off the reservation about the law," Buell said. The general rule is that appeals courts are supposed to wait to intervene until a case has been decided and one side appeals.

"The idea of mandamusing a judge to tell him who he is or isn't allowed to hear from when he's deciding an issue is ridiculous," Buell said. "But with what's going on in the federal judiciary right now, I've given up predicting what ridiculous issues will and won't be treated as nonridiculous."

Meanwhile, more than a dozen former Watergate prosecutors urged a federal appeals court to deny the Justice Department's request to drop its prosecution of Flynn.

U.S. law "requires district courts to exercise independent judgment when deciding a motion to dismiss federal charges," the former prosecutors said. "Independent judgment is unquestionably informed by an adversary presentation in which not all parties are singing from the same hymnbook."

The Justice Department decided to walk away from the case after saying the agents did not have a proper investigative purpose in questioning Flynn and that his lies were not "material" to the Russia probe.

But the former prosecutors rejected that reasoning. "It defies comprehension to suggest that an incoming National Security Advisor, whom Russia knew to have misled both the Vice President and the Press Secretary about his conversations with the Russian Ambassador to the United States, should not have been interviewed by federal agents concerned about the possibility of potential Russian blackmail," they said.

Information for this article was compiled by Matt Zapotosky and Devlin Barrett of The Washington Post; by Charlie Savage of The New York Times; and by Erik Larson of Bloomberg News. 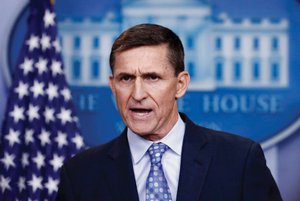