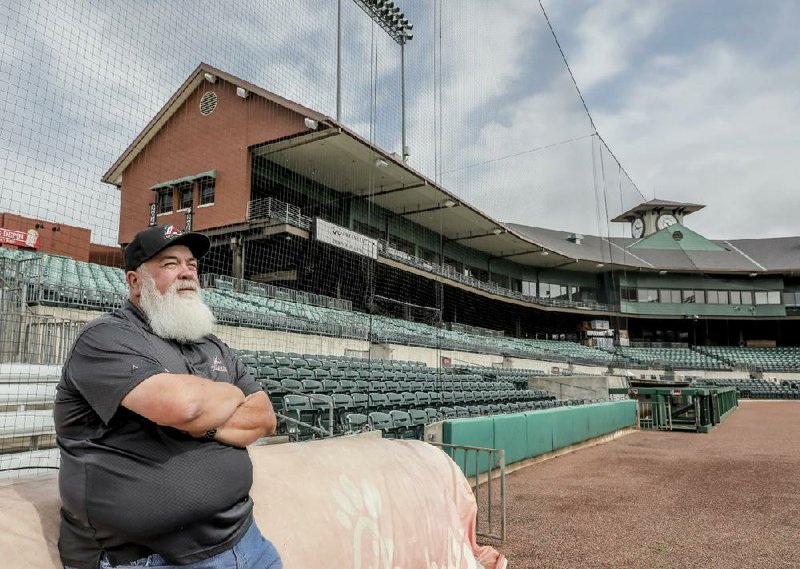 Greg Johnston, the head park superintendent at Dickey-Stephens Park in North Little Rock, stands by the right-field line Friday. While the minor-league season has been delayed because of the coronavirus pandemic, Johnston and his staff continue to maintain the ballpark. (Arkansas Democrat-Gazette/John Sykes Jr.)

On this overcast, warm Friday morning at Dickey-Stephens Park, there were reminders all around of a reality with which no one here is comfortable.

It's late May, and there should be minor-league baseball being played in North Little Rock almost every week. But the sight of stadium seats covered in dirt and spider webs, a field absent of its chalked white foul lines and a blank Texas League standings sign near one of the entrances makes what is already known more evident -- baseball hasn't been played here this year, and it may not be played here again until the next.

Down on the field, the man in charge of the upkeep of this 7,200-seat stadium, Greg Johnston, stood near home plate. Then a fresh weed growing inside the outline of the large, dirt circle caught his attention. Normally it wouldn't be there, yet another reminder of what's been taken away.

"It's been a long time since I've seen one of those down here," said Johnston, who pulled out his cellphone and snapped a photo to send to one of his assistants.

Johnston, 56, who routinely sports a long, white beard and a black Arkansas Travelers hat, practically has grown up with the club, which is currently the Class AA affiliate for the Seattle Mariners. But Johnston will admit he's a St. Louis Cardinals fan.

Dickey-Stephens Park is Johnston's responsibility. Out here, he's known as "Pooh Bear," a name given to him long ago by the head superintendent before him.

He's worked with the Travs since he was a kid, spanning 45 years in total. Growing up, he did everything from work as a parking lot attendant to a gate attendant to a bat boy to being on the grounds crew.

By the time he graduated from what is now North Little Rock High School, Johnston was already the assistant superintendent, and he decided to stay on instead of attending college.

More than 30 years have been spent as the head superintendent, but most of his tenure was spent working on the grounds of a different venue, Ray Winder Field, which was the Travs' home for nearly eight decades before Dickey-Stephens Park opened in 2007.

Johnston is one of the club's longest-tenured employees.

"This is all I've ever known," he said. "We were talking the other day -- this is the first time since I was a little kid that I can remember having time off in the summer time because of this [pandemic]. It's always been go, go, go this time of year."

With June approaching, the coronavirus still has baseball on pause , and the fate of the minor-league season is in peril.

Johnston knows it, too.

Johnston and the rest of the nine-person grounds crew at Dickey-Stephens Park are in a holding pattern. The weekly routine is much different than a normal year.

During the season, Johnston is working seven days a week, and often 16-hour days when the Travs have a home stand.

Game days are always the most taxing. He and his staff typically will get to Dickey-Stephens Park at 8 a.m., and from then on it's a mad dash to get the field and the ballpark in order before the team shows up in the early afternoon.

Once batting practice ends, more work is done to get the field ready prior to first pitch. Oftentimes, Johnston's English Cream Golden Retriever, Dizzy, can be seen roaming the field. When the game ends, there's more field work and cleaning up, and Johnston said he and his staff members usually don't leave until midnight or later. Rinse and repeat for months on end.

These days, long nights are no longer necessary with no games. Johnston -- who still is being paid a full salary -- has a normal 9 a.m.-5 p.m. schedule with the weekends off. Lunch breaks that were normally 30 minutes are now an hour. During the day, there's a lot more sitting around than normal, he admitted.

But that doesn't mean the work has stopped. As of late, Dickey-Stephens Park has become a home-improvement project.

On this particular Friday morning, one person was mowing the outfield berms. Two others were pressure washing the concrete nearby. Along the left-field line, a few workers were adjusting a pole for the protective netting.

"Right now, we're doing everything we can think of to improve things," Johnston said. "We've got a whole list of stuff. Me and Dizzy like to walk circles around the ballpark, and I carry my notepad with me and I'll say, 'Hey, we can come over here and do this.' And so we have plenty to do."

Some of that includes painting and pressure washing. Some of it entails replacing the green cushions on the outfield walls.

Johnston eventually wants to raise the benches in the bullpens so players can see better, as well as building a walkway inside the park's abnormally deep dugouts so players can easily rest their arms on the padding.

As for the field, the grass is being treated a little differently. Mowing is done every other day, instead of daily, allowing the grass to grow out more. Johnston has also put a pause on the chemical usage, so the grass is a lighter green color. The field is notorious for having sinkhole issues, but now those are mostly unnoticed.

The infield dirt has mostly been left alone, although the pitching mound and home plate circle are ready to go just in case and underneath tarps.

"If they gave us two weeks," Johnston said, "this ballpark would be ready to go [for a game]. I could have that field ready to go in a few days without a problem."

For now, the longtime superintendent takes care of a baseball field with no baseball.

"My whole life has always been a schedule, and now that schedule's all messed up. I don't really know what to do anymore, and it's hard," Johnston said. "But it'll be back. It'll all be back and it'll be better than ever and things will be fine. It's just -- I kind of miss not getting out there and getting dirty every day." 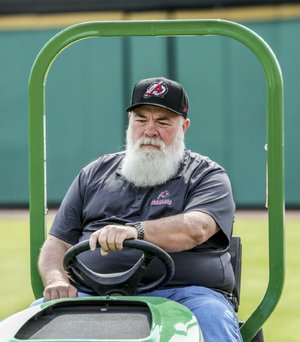 Greg Johnston, head park superintendent at Dickey-Stephens Park in North Little Rock, has worked for the Arkansas Travelers organization since he was a kid, with roles ranging from parking lot attendant to a gate attendant to bat boy to the grounds crew. (Arkansas Democrat-Gazette/John Sykes Jr.)