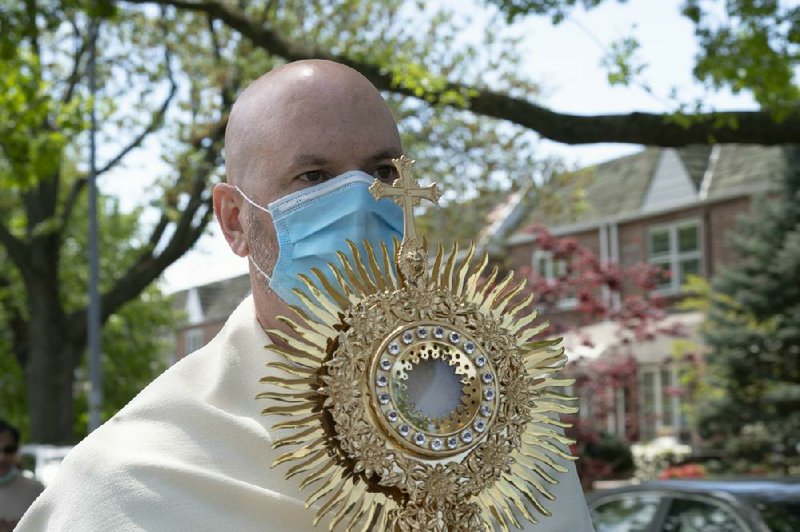 The Rev. Peter Purpura carries a monstrance during his procession in the Middle Village neighborhood of Queens on Sunday. After recovering from the coronavirus, Purpura found a way to bring the church directly to his people. (The New York Times/James Estrin)

NEW YORK -- The Rev. Peter Purpura walked slowly down the middle of a street lined with brick row houses in Middle Village, Queens. He wore a black cassock, white vestments and a light blue surgical mask as he led a procession.

Every few houses a family waited outside in their compact front yard, many standing next to makeshift altars adorned with flowers, candles and religious statues. Purpura stopped at each house, saying blessings and offering prayers.

It was Sunday morning, and in more normal times Purpura would have been presiding over crowded services at Our Lady of Hope Catholic Church. Since coronavirus restrictions forced him to close the church doors in March, he had been celebrating Mass in an empty chapel, streaming it live on Facebook. But after his own bout with the coronavirus, he decided to meet his parishioners where they are -- at home.

Purpura stopped in front of a house and greeted Alessia, 8, who was supposed to receive her first Holy Communion at the church this week. Instead, her rosary beads lay on a table set up by her parents, flanked by tulips. Purpura and Deacon Robert Lavanco joined Alessia and her family in reciting the Our Father and Hail Mary prayers.

At another house an older woman pleaded with the priest to give a blessing to her husband, who was very sick and could not come to the door. Purpura obliged, ducking inside.

Many of the hundreds of parishioners who have come out to greet Purpura have been deeply affected by the coronavirus as it ravaged New York. Some have lost their jobs as businesses closed and have been mostly stuck inside their homes for weeks. Others have risked their lives working as essential personnel. Middle Village, where most of his flock lives, is near Corona, Queens, one of the hardest-hit areas of the city.

"At this point everyone here is connected to someone who has been sick or has died," said Purpura, 38. He estimates that at least two dozen of his parishioners have died from the coronavirus. "I really do believe that this procession is a source of hope for people."

The coronavirus has not spared Purpura, or his family.

Last month, as he prepared to record Palm Sunday Mass, Purpura found that he could barely stand. His temperature reached 105 degrees. During Holy Week he developed shortness of breath, began coughing and was unable to celebrate Mass for two weeks while he battled the symptoms of coronavirus.

While he was sick, his aunt, Marcella Purpura, 85, a nun who lived in Rockaway Beach, Queens, died from the virus, and he could not officiate at the burial. His mother was hospitalized with the virus a week before his own illness and is still dependent on oxygen treatments. His father became sick with the virus around the same time but has since recovered.

After he recovered, he started holding the outdoor procession every Sunday morning, walking his parish bearing a golden monstrance containing a communion wafer. Though this procession, called the Blessed Sacrament, is normally held outside once a year in June, on the Feast of Corpus Christi, Purpura intends to continue it on a weekly basis until the church can reopen.

"With this procession I am able to bring the church to them, when they're not able to come to us," said Purpura, who grew up in Breezy Point, Queens.

Last Sunday was his third procession.

Vincent and Carmel Ann Caputo and their three children welcomed Purpura with a simple makeshift altar decorated with candles and statues. The words "Welcome Fr. Peter" were scrawled on the sidewalk in chalk.

"There was a void in our life for a couple of months because we were not able to attend Mass," Vincent Caputo said. "But bringing the Blessed Sacrament out of the church and into this community has had a positive effect, even though it was just for a few minutes in front of each home."

In the midst of difficult times, Caputo said the procession has fostered a "sense of camaraderie" on the block that he hopes does not go away when the virus does.

Purpura said he has been encouraged to see people's faith on display during the processions, which he described as "a kind of visual representation" of the church.

The buildings may be closed, he said, but the church is much more than physical structures. "For three centuries we didn't have public buildings -- but there was a church. The church is the people of God." 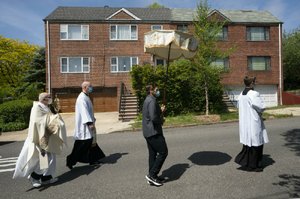 Sunday marked the third procession of the Rev. Peter Purpura (second from left) through the Queens neighborhood of Middle Village. (The New York Times/James Estrin) 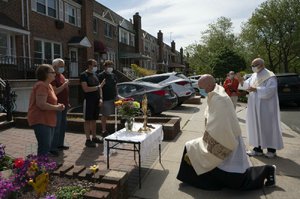 Kneeling at a makeshift altar in front of a house, the Rev. Peter Purpura has been greeted by hundreds of parishioners who have been deeply affected by the coronavirus. (The New York Times/James Estrin) 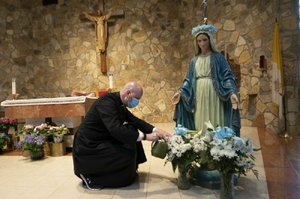 Coronavirus restrictions forced the Rev. Peter Purpura to close Our Lady of Hope Catholic Church in Queens, where he is shown caring for flowers. (The New York Times/James Estrin)

Print Headline: From a distance ...