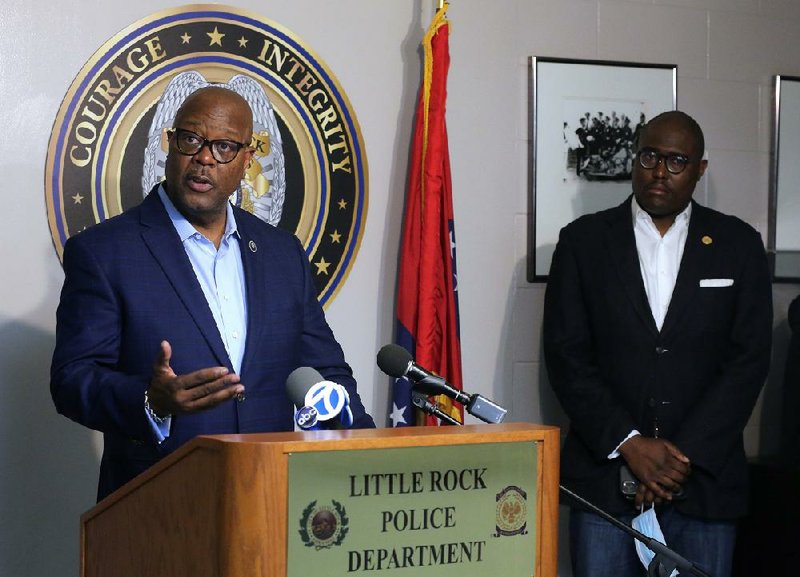 City Attorney Tom Carpenter on Friday notified Pulaski County Circuit Judge Chris Piazza by letter that he and his staff are ethically barred from defending the chief and the city in these circumstances. Carpenter had been considering a limited-scope representation, just to defend against an injunction sought by Finks, set to be argued next week.

Finks and Fulk are suing Humphrey and the city in separate suits accusing the chief of retaliating against them for testifying that Mayor Frank Scott Jr. pressured police into rushing an internal investigation into a fatal officer-involved shooting last year.

Their attorneys, Degen Clow and Chris Burks, petitioned the judge Friday to bar Carpenter from the defense, stating that he has admitted he has a conflict of interest because he and his staff have to work closely with Humphrey and the assistant chiefs in the course of their regular duties.

Carpenter explained the conflict to the City Council in a Thursday email describing the search for lawyers to represent Humphrey and the city.

"There are numerous issues that this office handles for the Little Rock Police Department, and it often involves interaction with all of these three individuals [Finks, Fulk and Humphrey]," Carpenter wrote. "Under the ethics rules for lawyers, to represent a person in one thing and be adverse to that person in litigation at this level creates an irreconcilable conflict of interest."

In his letter to the judge, Carpenter said that after consulting legal experts, he had thought he could defend against Finks' injunction request, but with Finks and Fulk challenging his participation, he has concluded that he should not defend the chief even in just one hearing.

Finks is also asking that proceedings be delayed until the city has appropriate legal representation. Finks' lawyers also petitioned the judge to bar the law firm of Friday, Eldredge & Clark, which represents Little Rock in civil service matters, from defending the city and Humphrey, arguing that the firm has the same conflict of interest as Carpenter.

The petition also accuses Carpenter of tainting an ongoing Human Resources investigation into Humphrey in his email to city directors that describes the accusations made by Finks and Fulk as "inconsistent with the relevant facts," and says Carpenter will "document misconduct by certain parties in these actions" in a pending court filing.

Finks further asks the judge to strike those statements from the record and bar Carpenter and his staff from involvement in the Human Resources investigation.