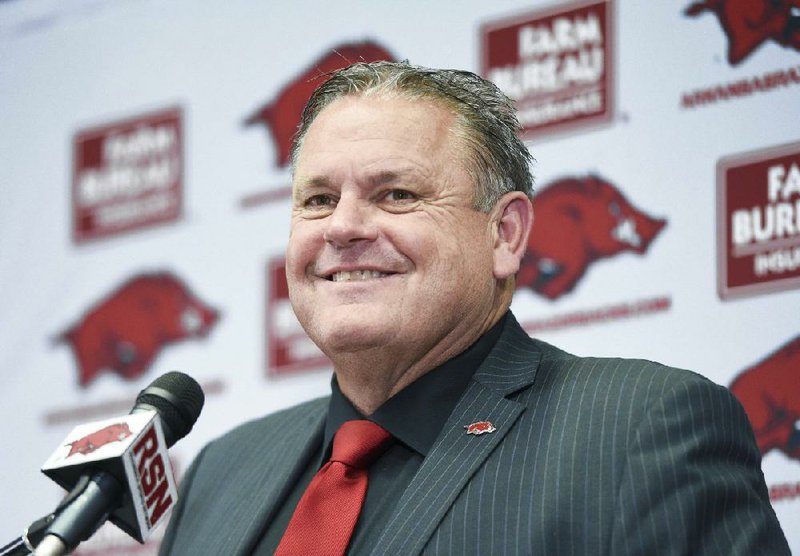 FAYETTEVILLE -- The napkins in Sam Pittman's home stood out to Steve Cox.

The University of Arkansas search team that included Athletic Director Hunter Yurachek, Deputy Athletic Director Jon Fagg and Cox, a UA trustee who played for the Razorbacks, arrived at the Pittmans' home in Athens, Ga., on the afternoon of Sunday, Dec. 8. They were greeted with characteristic Southern hospitality.

The fifth in a series detailing the back story on the hiring of Arkansas head coaches.

Jamie Pittman, the coach's wife, had cookies and other refreshments sitting out. Cox said he remembers the stack of cocktail napkins she placed on the counter, surely designed by some offensive line coach.

The opportunity to go back to Arkansas was a dream come true for the Pittmans, who lived in Fayetteville from 2013-15 when Sam was the Razorbacks' offensive line coach. It went by quickly, and they were on the move again when Pittman was hired to coach the offensive line at Georgia.

"She loved Arkansas," Sam said of Jamie, "and was mad at me for a couple of years after we left."

Sam Pittman had spoken to Yurachek and Fagg in separate phone calls prior to that day, but he wasn't sure how interested they were. Perhaps Arkansas' administrators had spoken to him as a courtesy.

Now the decision-makers were in his home. The interest was real as could be.

Fagg knew the Pittmans well because his years as Arkansas' football sport administrator overlapped with the years Pittman coached the line.

"It was a little more personal for me because he wasn't just a former colleague," Fagg said. "I've followed along with him, and his wife and my wife literally texted after their games, win or lose. I remember going to the door and hugs for everybody. It was just a really exciting feeling thinking this was going to work.

"They loved their time in Fayetteville, and I knew that. He's from nearby, so the feeling in the house and in the room was just incredibly energetic. We had a wonderful conversation, talked philosophies like you do and had a long conversation. I remember it feeling really abrupt in a fun way when Hunter said, 'Well, maybe I need to offer you the job. Do you want the job? Do you want to be coach of the Razorbacks?' And Sam was like, 'Well, yeah!' "

It was a great end to a whirlwind day for the 58-year-old coach, and it began with a prayer.

A night earlier, Pittman had watched from the sideline of Mercedes-Benz Stadium in Atlanta as Georgia became the latest team to fall victim as LSU steamrolled toward a national championship. With a trip to the College Football Playoff on the line, the Bulldogs lost 37-10 to LSU in the SEC Championship Game with one of their worst offensive performances during Pittman's time with the program.

The Bulldogs allowed a season-high three sacks and rushed for only 61 yards -- the third-lowest total in Pittman's four years as Georgia's line coach.

On the bus back from the game, he checked his cellphone, hoping to see a message from the Arkansas search team. There wasn't one to be found.

"I got disappointed for a while," Pittman said. "That next morning I woke up and told Jamie we needed to pray and be thankful for where we're at and what we had, and how blessed we had been, and I meant it. We did, and I had a real calm about myself going into work."

Inside Georgia's football office that Sunday morning, Pittman began to grade the film from the night before.

It was during that grading session, around 10:30 a.m. local time, that Fagg called. He wanted to know whether Pittman would accept the Arkansas job if it was offered.

"I said, 'Well, absolutely,' " Pittman recalled. "I went down and told [Georgia Coach] Kirby [Smart] and said, 'Hey, Arkansas may or may not offer me the job here.' We had a meeting to go to and I said, 'If they call me during the meeting, I need to step out,' and he said no problem.

"We had our meeting and we came out, and about 10 minutes after, Jon called again and said, 'We talked to Jamie and we've got the address, and we're flying out there to come interview.' "

Georgia's coaches had a team meeting that afternoon and a gala to attend that night. In his earlier phone call, Fagg had made it clear that if he asked Pittman to miss those events it was a good sign.

Pittman's head began to fill with thoughts of what he could do to prepare. One thing he could fix right away was his hair. He left Georgia's football office and headed for the local Sport Clips.

With the Arkansas search team in the air and en route for Athens, he entered a busy shop. He was 19th in line, and the clock on the wall said his turn in the chair wouldn't come for approximately 59 minutes.

"I was thinking an hour waiting, at least 20 minutes to cut my hair, and then I had another 15 minutes home," Pittman said. "I was thinking, 'Man, I'm going to be late for the most important interview I've ever had.' "

Doing things the right way had Pittman -- with no coordinator experience and whose highest level as a head coach was in junior college 25 years earlier -- in position to land one of the most coveted titles in his profession, SEC head coach. He refused to ask other customers whether he could cut in line.

He just sat there patiently and spoke with the others in the waiting area.

"I got a lot of, 'Y'all didn't play very good last night' and all that," he said. "At that point, it was the furthest thing from my mind.

"I got my hair cut, ran home, and they hadn't got there yet. I took a shower, put on my tight suit, and Jamie was already ready."

Told of that story, Cox laughed and said: "That was the last thing we were worried about, was his haircut."

Neither Yurachek nor Cox had been around Pittman, but Fagg assured them they were in for a treat when they interviewed him.

"Here was a man that really wanted to be the Razorback football coach beyond a shadow of a doubt," Cox said. "He wanted this job like you could not believe. I just fell in love with him and his passion."

Fagg, who has been a top aide for 12 years with the Razorbacks, had been in the room for high-profile job offers before.

"The atmosphere around Sam was different than all the other interviews I've done," Fagg said. "Sam was so incredibly excited at the prospect that he was going to get to represent the University of Arkansas and the state of Arkansas. It was a really, really special feeling. It's hard to describe. I wish I could."

When Pittman accepted the job, Yurachek presented him with the offer letter and told him to take some time to look it over and call his agent.

"Jamie and I, we went into that bedroom and we were jumping around like we were 5 years old," Pittman said. "Then we got to call a few people that we love and care about. We didn't call all of them, but it was a lot of fun."

The final step was to announce the hire. A small internal media crew had accompanied Yurachek, Fagg and Cox to Athens, and were summoned inside once the job had been accepted.

Yurachek asked Pittman whether he had a Razorback helmet in the home. They went downstairs to his basement where he had a helmet from every school he had ever played at or coached dating to his high school days in Oklahoma -- some 17 schools in all.

In the video posted to Twitter, Yurachek and Pittman were holding the helmet as Yurachek asked, "Hey Coach Pittman, you got something to say?"

The search team left the home and picked up chicken from Zaxby's. The Pittmans collected their things and met them at the plane.

"It seemed like when we all left and went to the airport, there were some of his [Georgia] players out there saying bye," Cox said. "They had already heard."

The day wasn't over. There was a late-night team meeting in Arkansas, an introductory news conference the next day and recruiting to catch up on, but the Pittmans were heading back to the place they held dear.

"When we landed [in Fayetteville], there were a lot of people at the airport," Pittman said. "That was awesome. It happened so fast and you're going boom, boom, boom, boom.

"It was kind of surreal, kind of awesome." 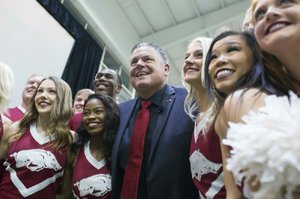 Arkansas football Coach Sam Pittman stands with cheerleaders after his introductory news conference on Dec. 9. Pittman starts his first season as the head coach at Arkansas after spending the previous four seasons as the offensive line coach at Georgia. (NWA Democrat-Gazette/Charlie Kaijo)