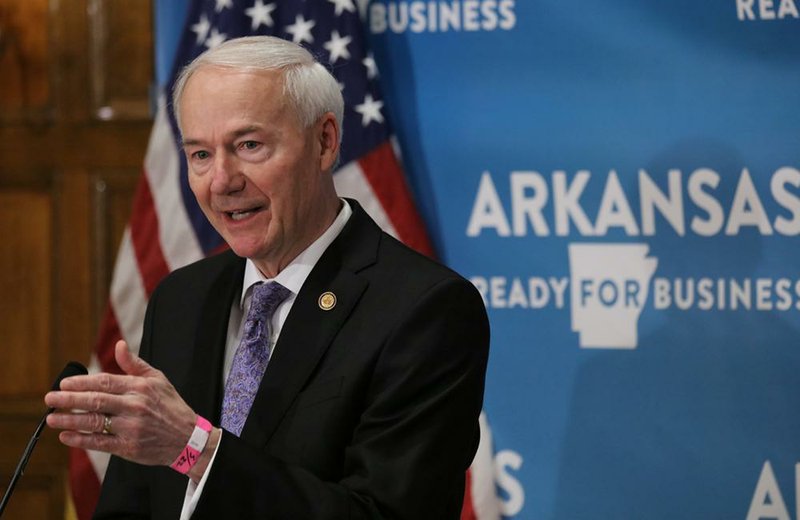 Gov. Asa Hutchinson said Friday that “our hospitalizations and our recovered cases and our testing and our positivity rate are going in the right direction.” More photos at arkansasonline.com/523covid/. (Arkansas Democrat-Gazette/John Sykes Jr.)

Arkansas' count of coronavirus cases rose by 154 Friday -- still higher than the usual amount but down from the record 455 cases added a day earlier.

The state's death toll from the virus rose by three, to 113, while the case count increased to 5,612.

New cases included 19 inmates at the Federal Correctional Complex in Forrest City, at least some of which were reported as part of the prison outbreak earlier but weren't in the state's overall count until information from laboratory reports was entered into a state database.

The remaining 135 noninmate cases were the state's second-highest increase in such cases so far, exceeded only by the more than 220 such cases added Thursday.

Because 114 Arkansans who tested positive earlier were newly classified as having recovered, the net increase in active cases on Friday was 37.

That raised the state's total number of active cases to 1,470, topping the previous high of 1,466 that officials reported April 25.

At his daily news conference on the pandemic, Gov. Asa Hutchinson said more than half of 33 cases added in Washington County "came from three households," which he said "shows you the quickness of spread in a household or in a community."

Meanwhile, eight of the new cases were "from the same street" in Paragould, he said.

[Video not showing up above? Click here to watch » https://www.youtube.com/watch?v=VVCjKDtDg1U]

"You don't know whether it's kids playing together, or a block party that they didn't do the social distancing, but eight came from the same street," he said. "It reminds us that we have to continue to be careful, practice our social distancing, and even though we're testing a lot, our cases might go up, we can handle all of this if we are doing the right thing in avoiding the spread and protecting our families."

Hutchinson noted that testing in the state increased and that the percentage of results each day that are positive has mostly remained below 10% since mid-April.

He said the Department of Health also had success in locating infected people and those with whom they have had contact.

The department as of Friday morning had made contact with 61% of the people (not prison inmates) whose positive test results were added to the count Thursday.

"I am comforted by the numbers that we see today and the contact tracing that we're doing," Hutchinson said.

"When we're doing this level of testing, I'm not overly concerned about the number of cases versus simply knowing where they are, and that our hospitalizations and our recovered cases and our testing and our positivity rate are going in the right direction," Hutchinson said.

After rising for four days, the number of hospitalized covid-19 patients Friday fell by five, to 81. Those on ventilators remained unchanged at 14.

All the other counties with new cases had five or fewer.

At the federal prison in Forrest City, the number of cases among inmates rose by 13, to 622. Not all of them had been added to the official statewide count or total for St. Francis County as of Friday.

Smith said one of the 226 noninmate cases added Thursday was removed after it was discovered the person lives outside of Arkansas. Another was removed because the person tested negative after testing positive.

The Health Department as of Friday morning had contacted 137 of the remaining 224 people to make sure they are isolating themselves and to gather information about people they have had contact with.

Through its investigations of earlier cases, the department had already identified 53 of them as people who had had contact with someone who tested positive, Smith said.

Under the department's procedure for investigating cases, such contacts would have already been directed to quarantine themselves at home and to get tested if they begin developing symptoms. The department has also started testing such contacts even if they don't have symptoms.

The department also identified 37 of the 137 people it contacted as workers at four businesses.

The largest number, 21, work at Nebo Poultry in Dardanelle and Russellville, raising the total number of workers known to be infected there to 50.

The others employees included seven at Ozark Mountain Poultry in Rogers, five at St. Bernards Medical Center in Jonesboro and four at a Cargill plant in Springdale, Smith said.

Out of all those who have been contacted so far, just two reported eating at a restaurant, and two had visited a gym or fitness center, Smith said.

"So far, we're not seeing any clusters related to these activities that we've newly opened up," he said.

Kasey Holder, St. Bernards' vice president of medical affairs, said in a statement that a few of the center's team members began exhibiting coronavirus symptoms and were immediately tested and sent to home isolation.

The hospital contacted people who may have interacted with affected employees.

"With healthcare workers accounting for nearly 10 percent of all confirmed COVID-19 cases in the state of Arkansas, I commend our team for its dedication to the St. Bernards mission of providing Christ-like healing to the community; including those sickest among us," Holder said. "I also commend our team for implementing rigorous COVID-19 safeguards that protect every individual who enters our medical center."

Those safeguards include a retooling of the facilities to care for covid-19 patients in separate areas and requiring masks on anyone in the facility.

"Our employees only interacted with a small number of patients, and we have confirmed that all parties wore facial coverings during those interactions," Holder said. "Still, we have notified patients of the low-risk exposure and continue our strict adherence to guidelines from the Arkansas Department of Health and Centers for Disease Control and Prevention."

Cargill is enforcing a mandatory 14-day quarantine for employees who tested positive for, or were or may have been exposed to, the virus, according to an email from Daniel Sullivan, spokesman for Cargill.

The company is also providing masks to employees, increasing distancing among them and not allowing visitors, Sullivan wrote in an email.

A representative of Springdale-based George's, which owns Ozark Mountain Poultry, had no comment. The representative referred to the company's coronavirus response on its website, which says George's is taking steps such as screening employees and requiring masks.

"They're quarantining and practicing social distancing," Thone said. "The manager is, according to the Health Department, very cooperative and is doing everything he can to stop the problem."

Rick Padgett, chief of the Danville Police Department, said in a Facebook post Thursday that three positive cases there were related to the company's Dardanelle location.

Messages left for Troy Whitlow, the company's general manager, were not returned as of late Friday.

The Health Department on Friday posted a directive listing rules for bars and clubs that reopen Tuesday.

As with the rules on restaurants, it limits seating to 33% of the business's capacity and requires staff members to wear masks. Patrons also must wear masks until food or drinks are served.

• Seats at the bar must be at least 6 feet apart.

• Reservations should be encouraged. Otherwise, distance must be maintained between customers waiting to be seated.

• No shared containers of drinks.

• Patrons are not allowed to dance.

• In-seat games, arcades, billiards, and other games that patrons physically touch should be disinfected between each use.

Smith also said that, starting Monday, the Health Department would begin allowing hospitals and clinics to perform surgical procedures regardless of a patient's risk factors and the expected length of a hospital stay after the surgery.

Previously, the procedures were limited to ones requiring an expected hospital stay up to 48 hours, and weren't allowed on patients with severe, life-threatening conditions.

The department also lifted a requirement for patients to receive a pre-procedure virus test, providing the procedure is done in a hospital and does not involve "penetration of a body cavity or joint space."

A test must be performed up to 72 hours before a surgical abortion, a requirement that has sparked a challenge in federal court by Little Rock Family Planning, the only clinic in the state that offers surgical abortions.

"Our uniformed state park staff will be monitoring and enforcing the safe physical distancing that is required," she said.

Veterans Affairs Secretary Col. Nathaniel Todd said Memorial Day ceremonies at veterans cemeteries in North Little Rock and Bird Eye will be livestreamed on Facebook but not open to the public.

But he said families are welcome to visit the grave sites of loved ones.

Hutchinson on Friday also once again revisited his stance on the possibility of mail-in voting as a way to prevent the spread of the coronavirus.

In the past, Hutchinson has said he would consider allowing no-excuse absentee voting in the Nov. 3 election if the coronavirus still presents a public-health emergency.

He signed executive orders allowing such voting during the March 31 primary runoff and special elections held May 12 and set for June 9.

During a visit to the White House on Wednesday, Hutchinson again said he supported "no-excuse absentee voting," then later said he meant to say early voting.

Mail-in voting is "not the law in Arkansas, and there's not broad support for that in my judgment in Arkansas, and we certainly haven't figured out the security issues in regard to that," Hutchinson said Thursday.

On Friday, Hutchinson said he hadn't changed his position on mail-in voting.

"The challenge is that you're talking about the November election and it's too early at this moment to make any -- exercise emergency powers for something in November," he said. "Now we'll get there, but we're not there yet, and so this is not on the front burner of my issues right now.

"I think we're going to need to wait a little bit longer to get a sense as to ... whether we'll still be in an emergency in November during the election."

Hutchinson also announced that the Arkansas Economic Development Commission has approved 8,198 grant applications through the Arkansas Ready for Business program.

The grants total $91 million, said Alisha Curtis, spokeswoman for the Department of Commerce.

Hutchinson said the grants will go to "our small business owners across Arkansas to help them as they restart and re-engage in business and expand.

"This grant money will be sent out today and over the weekend," he said.

Curtis said about 4,000 applications are under "a second level review due to unresolved tax issues, potential for duplicate submission and missing information.

"The team at [the Arkansas Economic Development Commission] will be working over the holiday weekend to review these applications," she said.

Last week, the Arkansas Legislative Council directed Commerce Secretary Mike Preston to pay up to $147.7 million in grants through the program.

The latest deaths included the first one in St. Francis County.

The number of nursing-home residents who have died from the virus, as tracked in Health Department reports, rose by two to 47.

One was at The Waters of White Hall, raising to 14 the total of residents there who have died of the virus.

The other was the second at Allay Health and Rehab in Little Rock to die from the virus.

Todd said all 90 residents at the state Veterans Home in North Little Rock, where one worker has tested positive, tested negative.

Statewide, the number of nursing-home or assisted-living facility residents who have tested positive, including those who have died, increased by 22, to 397.

That included 16 residents at Courtyard Healthcare and Rehabilitation Center in El Dorado, for a total of 31 residents there.

Fifty-nine nursing homes or assisted living facilities have had a resident or worker test positive.

The number of cases among workers at the facilities rose by four, to 201. 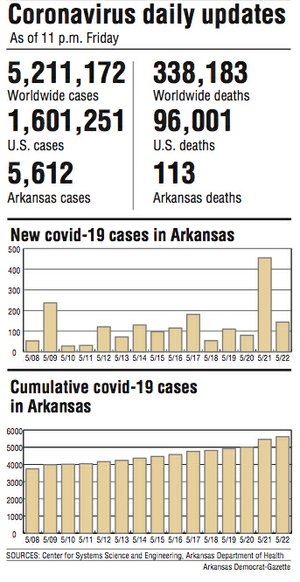 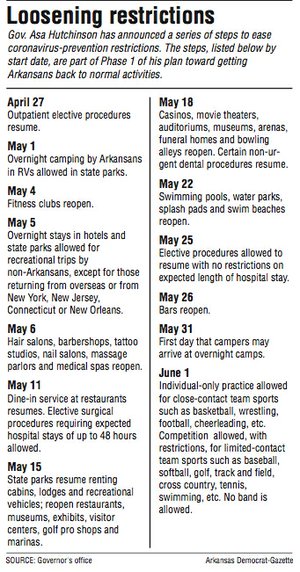