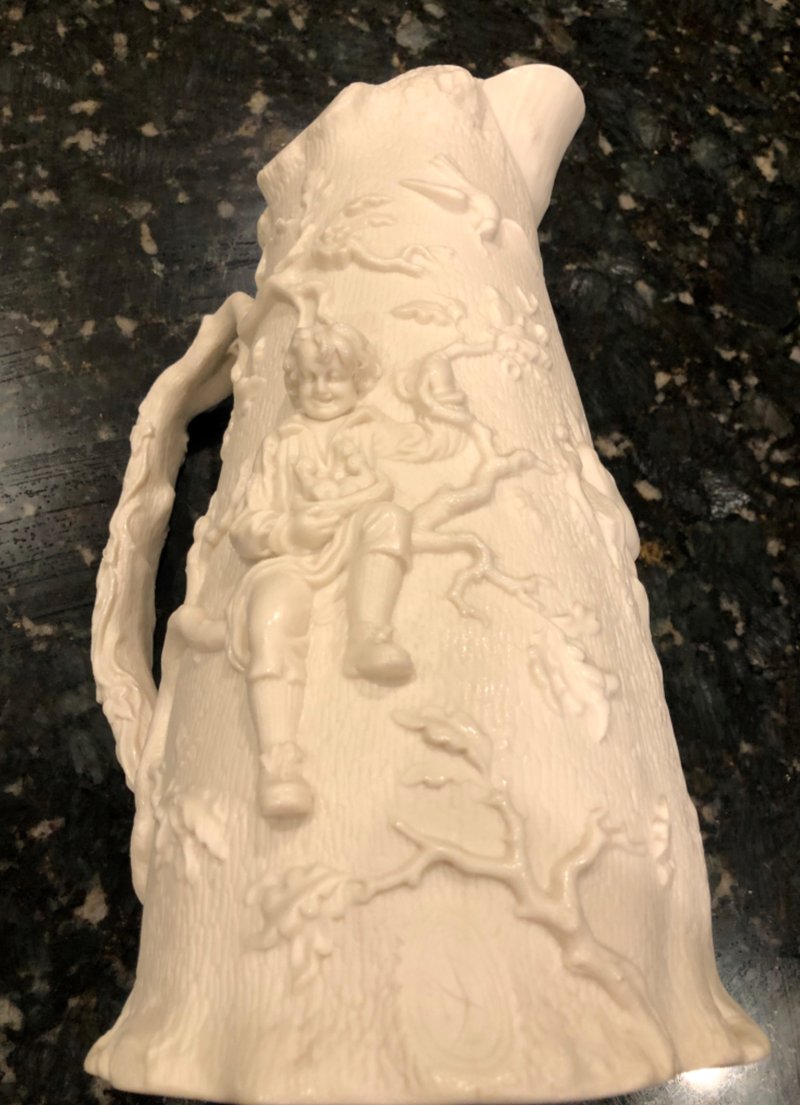 This is a depiction of boyhood in the mid-19th century. (Handout/TNS)

DEAR HELAINE AND JOE: This pitcher came from my aunt's estate. I have always loved it. The boy is climbing up the tree toward a bird's nest on one side and has the nest in his hands on the other. Please let me know if you have any information on the pitcher's origins.

DEAR M.B.: Much of the story of this charming pitcher is printed on the bottom. But before we examine that, we want to discuss the material from which the pitcher was made.

Generally the substance is porcelain, but specifically it is a type of porcelain that goes by the name "Parian." Originally the term was applied to the flawlessly white marble found on the Aegean Island of Paros. Much of ancient Greek sculpture was crafted from this substance, as were the facades of temples and important public buildings.

Around 1842, the Staffordshire pottery firm of Copeland & Garrett started making a porcelain material they initially called "statuary porcelain." The material was white and flawless with a surface that resembled marble. By 1844, the company was making small statures in the material, and it became popular in the United Kingdom and elsewhere.

The name "statuary porcelain" soon gave way to the more succinct term "Parian" porcelain when large numbers of other pottery companies began making objects from the material. Soon it was not just statues being made from Parian porcelain but a variety of household equipment -- most particularly pitchers (or "jugs" as they are called in Britain).

The Parian porcelain jug belonging to M.B. was made by T. J. & J. Mayer (Thomas John and Joseph Mayer) of Burslem and Longport, Staffordshire, England, who went into business in 1843. As is noted on the jug, the company won an award at the prestigious London Crystal Palace Exhibition of 1851.

The jug is also marked with a sort of kite-shaped symbol stamped in black that is the English registration mark in use between 1842 and 1867. This served as a sort of patent mark for an object's design or shape. The design for the jug's pattern was registered in 1850.

The piece is pure white, but we have seen examples that have the tree trunk tinted a beautiful blue with the boy, branches, leaves and nest left in white. This version is very dramatic and commands a little more collector interest than the pure white variety, and retails in the $125 to $150 range.

If the all-white type is approximately 7 inches tall, it should be valued in the $75 to $100 range. But we must note this example has a hairline crack across the bottom, which reduces the value by half or more.