Pompeo says security proposal a ‘death knell’ for autonomy by Compiled by Democrat-Gazette staff from wire reports | May 23, 2020 at 3:33 a.m. 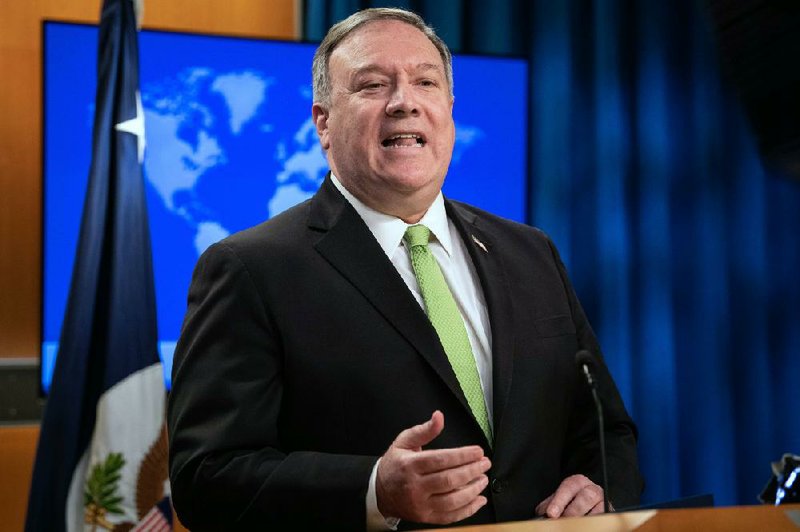 WASHINGTON -- Secretary of State Mike Pompeo condemned China on Friday, a day after Beijing unveiled details of a broad new security measure that would allow Chinese officials to crack down on political freedom and dissent in Hong Kong.

Pompeo said the move would amount to a "death knell" for Hong Kong's political and economic semi-autonomy and signaled that the United States might punish Beijing.

He was the most senior Trump administration official to offer a substantial reaction to China's drastic proposal.

"We're absolutely not going to give China a pass," Hassett said, adding, "It's a very difficult, scary move."

After the Chinese proposal was announced Thursday, the State Department commented only through its press officer. The president himself was noncommittal, saying he was unfamiliar with the measure.

Pompeo said the United States "condemns" the legislation proposed by China's Communist Party that is likely to be enacted in the coming days.

He said the proposal "would be a death knell for the high degree of autonomy Beijing promised for Hong Kong under the Sino-British joint declaration," and that it "would inevitably impact our assessment of 'one country, two systems' and the status of the territory."

"Hong Kong has flourished as a bastion of liberty. The United States strongly urges Beijing to reconsider its disastrous proposal, abide by its international obligations, and respect Hong Kong's high degree of autonomy, democratic institutions, and civil liberties, which are key to preserving its special status under U.S. law," Pompeo said in a statement.

"We stand with the people of Hong Kong," he added.

The contentious measure, submitted Friday on the opening day of China's national legislative session, is strongly opposed by pro-democracy lawmakers in Hong Kong.

The proposed bill is aimed at forbidding secessionist and subversive activity, as well as foreign interference and terrorism.

In the Trump administration, China policy has generally been divided between economic officials wary of conflict that could rattle markets and disrupt trade talks, and national security officials determined to confront Beijing's growing strategic power.

"China's move in Hong Kong is going to be very, very bad for the Chinese economy and the Hong Kong economy," Hassett added in remarks to reporters at the White House.

National security officials in the administration have tried to push back against China on a wide range of issues, including technology, espionage and military presence in the Pacific.

Their concerns over Hong Kong escalated last year when pro-democracy protesters took to the streets beginning in the summer and were confronted at every turn by the police. In Beijing, hard-line Chinese officials determined that the police were not using enough force to suppress the protests.

State Department officials have discussed how China's proposed national security law might affect the preferential trade and economic status that the United States has given Hong Kong since it has had semi-autonomy since 1997, when Britain handed over control of the territory to China.

One option is for the United States to end the status based on a conclusion that Hong Kong, a global financial hub, no longer enjoys any substantial autonomy under China.

Later Friday, the Commerce Department struck yet another blow to Chinese industry, announcing plans to bar the export of U.S. technology without a license to 33 companies and government institutions including major research labs.

It accused two dozen of the targeted entities of threatening U.S. national security because they could help China develop weapons. They include China's top cybersecurity company, Qihoo 360, the robotics and artificial intelligence firm Cloudminds Inc., and various research institutes involved in laser and other advanced technology.

Information for this article was contributed by Michael Crowley and Edward Wong of The New York Times; and by Eric Tucker of The Associated Press.