Self-proclaimed creator of rock ’n’ roll Little Richard left behind a legacy of more than innovation. He was a charismatic performer who was a role model for many. by GEORGE VARGA The San Diego Union-Tribune (TNS) | May 24, 2020 at 2:13 a.m. 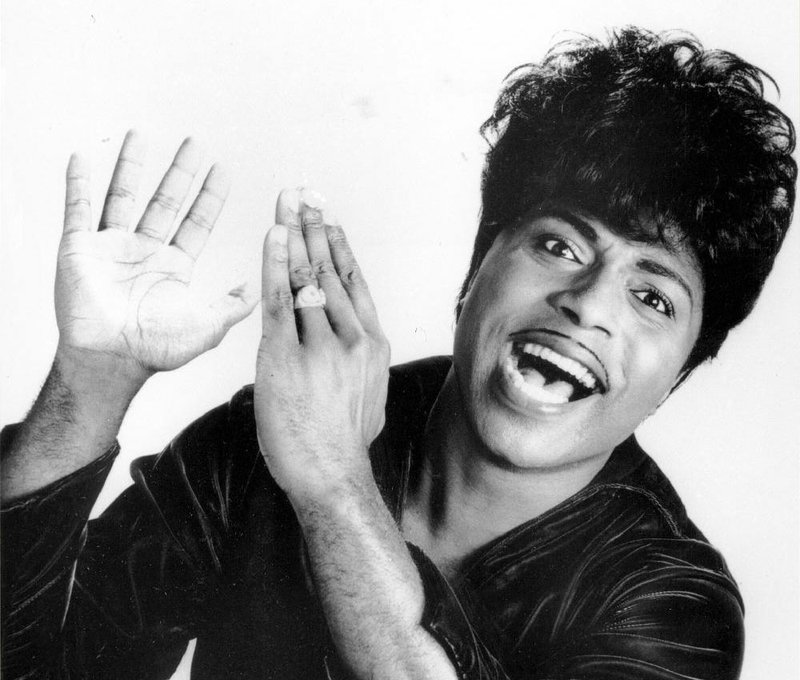 Rock 'n' roll pioneer Little Richard, one of the most charismatic performers the music has ever known and a key influence on everyone from The Beatles to Prince, died May 9. He was 87.

In a May 9 post on Instagram, Little Richard band guitarist Kevin Holly said: "Rest in peace, Richard. This one really stings. My thoughts and prayers go out to all my band mates and fans all over the world. Richard truly was the king!"

Alongside Chuck Berry and Fats Domino, Richard was long hailed as one of the prime creators of rock 'n' roll in the 1950s, although he disputed being grouped with them.

"I am the creator of rock 'n' roll, I am the originator, the innovator, the emancipator," Richard declared in a 1993 San Diego Union-Tribune interview, which appears below.

"I am the architect of it. I started it. Before me there was nothing but chickens and a few pigs and ducks. Fats Domino and Chuck Berry? They were singing blues, low-down blues, back then. They weren't rocking at that time."

With his pounding piano and exuberant singing at the fore, Richard created some of the most electrifying songs in the rock canon. Perhaps his best was "Tutti Frutti," whose wordless opening vocal declaration -- Awopbobalubobawopbambom! -- captured the spirit of rock in one joyous eruption.

He was born Richard Wayne Penniman on Dec. 5, 1932, in Macon, Ga. The Beatles enthusiastically covered a number of Richard's classics during the band's early days. Paul McCartney likened performing those songs to having an out-of-body experience.

"I could do Little Richard's voice, which is a wild, hoarse, screaming thing. It's like an out-of-body experience," McCartney once told an interviewer. "You have to leave your current sensibilities and go about a foot above your head to sing it. You have to actually go outside yourself."

Richard's illustrious career was full of ups and downs, from fame and fortune to long periods of inactivity and several arrests. He discussed his music and life with characteristic flair in this July 15, 1993, interview with this reporter, which appears below.

Much the way he sings and pounds his piano on "Tutti-Frutti," "Good Golly, Miss Molly" or any of his other revved-up rock 'n' roll classics, Little Richard rips into an interview with the same hold-on-to-your-socks intensity he brings to his music. 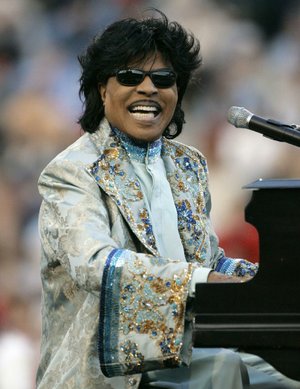 Photo by AP
**FILE** Little Richard performs during halftime at the Liberty Bowl in this Dec. 31, 2004 file photo in Memphis, Tenn. Little Richard built some goodwill in his hometown when he donated almost half of his concert fees to settle concerns over who was paying the tab for his show Saturday, Oct. 8, 2005. (AP Photo/Mark Humphrey, File)

Shooting words out like a hyperactive drummer playing in double time, punctuating his thoughts with conversation-stopping exclamations, he doesn't so much answer questions as put on a verbal show nearly as flamboyant as one of his uproarious concerts.

Little Richard accents many of his spoken riffs with a wave of his hands, a shake of his shoulder-length mane of jet-black hair, or an exaggerated facial expression that leaves no doubt a performance is in progress.

"I have the charisma," the [then] 60-year-old rock legend stated matter-of-factly.

That charisma can be credited for helping to sustain his on-again/off-again career since the mid-1950s.

Whenever a musical topic inspires him, which was often during [this] interview, Richard breaks into his trademark falsetto and begins singing. His impromptu selections included "Tutti-Frutti," Dizzy Gillespie's "Salt Peanuts" and Eddie Cochran's "Somethin' Else" (which Richard recorded with country vocalist Tanya Tucker).

The latter song, which, he maintains, copies his own "Keep A Knockin'," could have been named for Richard. Still brimming with the infectious exuberance of his rock 'n' roll glory days, he has always been something else -- an electrifying dynamo who shows every sign he'll keep a knockin' as long and hard as he's able.

"Where did I last play in San Diego?" mused Richard. "Oh, my god! The last time we played San Diego was with Ike & Tina Turner in a 'battle of the blues' -- a battle of rock, really."

He arches his eyebrows and grins mischievously. "Ah-ha-ha-ha! I'll just say: Shut up!" he replied.

"That was when Ike and Tina had gotten real popular with 'Proud Mary,' and Tina was doing all of that wild dancing. It was something. I think I climbed on top of the sound system, way up in the air, and jumped off."

So far as can be determined, Richard still hasn't landed, and rock 'n' roll is all the more vital for it.

Richard excitedly commented on the box-office success of the Tina Turner-based film What's Love Got to Do With It.

"Tina has proven that people still go for the old stuff; that movie is a smash," he said. "The soundtrack album is on the charts -- way up there! -- and even her old music is starting to do well ... ."

Richard's voice trails off. But his admiring tone and Cheshire Cat-like grin leave no doubt that he, too, would like to be the subject of a feature film. (NBC's made-for-television movie, The Little Richard Story, was broadcast in 2000.)

And why not? Who else in rock would make a better film subject than "Little" Richard Wayne Penniman, the fabled Georgia Peach, and perhaps the most extroverted extrovert rock has yet produced?

This, after all, is the man who turned popular music inside out in the mid-'50s; inspired scores of aspiring rockers from Liverpool's Beatles to Detroit's MC5; made big hair an enduring fashion statement; and served as a perpetually outrageous, makeup-wearing, gender-bending rock 'n' role model for Prince, Michael Jackson, David Bowie, Sylvester and many more.

"I am the creator of rock 'n' roll, I am the originator, the innovator, the emancipator," Richard declared, repeating the mantra-like words he has convincingly uttered so many times before.

"I am the architect of it. I started it. Before me there was nothing but chickens and a few pigs and ducks. Fats Domino and Chuck Berry? They were singing blues, low-down blues, back then. They weren't rocking at that time.

"My roots are totally in gospel and rhythm and blues because to me that's what rock 'n' roll is: rhythm and blues, up-tempo. That's all it is. I don't see why they try to separate it or put a new title on it."

"My first was Mahalia Jackson," he said, citing the late gospel legend. "I idolized her so as a little boy. I used to love the way that she phrased, and her songs had so much feeling in them."

Richard also cites Big Joe Turner and Little Esther as early inspirations. And he responded affirmatively when asked if he was influenced by singer Clyde McPhatter ("one of my idols"); jump-blues/R&B pioneer Louis Jordan ("a great inspiration; he was a showman who didn't dance, and I like showmen who can't dance"); gospel/R&B star Sister Rosetta Tharpe, whose impassioned Whoooos Richard turned into his own vocal trademark ("that's who really inspired me to be in show business"); and singer-pianist Esquerita ("one of the greatest songwriters and pianists I ever met").

One of 11 brothers and sisters of a Seventh-day Adventist preacher and his wife, Richard grew up in rural Georgia. His destiny, he realized early on, was elsewhere.

"I knew I wasn't supposed to live in Macon all my life; I knew I wasn't supposed to be in Georgia all my life," he declared. "I knew that something had to happen. My mama had 11 children, and I wanted to help them. My dad was dead, and I wanted to see them eat and sleep, and that's what I was doing. It was very important for me to be famous, and I think God opened up that door for me."

He cites God several more times during the interview. But he grows angry when asked to discuss the gospel music he has performed during those periods in his career when he became convinced rock was the devil's music.

"We don't do gospel in our shows," Richard, an ordained Seventh-day Adventist minister, said testily. "Our shows are totally rock 'n' roll from beginning to end. Our show is not a gospel show, it is not preaching. There's a pulse the whole night because we don't do gospel."

He grew even more impatient when asked about the makeup he began wearing 40 years ago -- a pioneering fashion move since emulated by Mick Jagger, Prince and other gender-bending male rockers.

"I can't take no credit for that," insisted Richard, whose face is caked with pancake makeup. "I didn't know what I was doing ... some of these things just happened. I didn't know they were going to be [copied]. I'm not going to be able to answer all these questions. I don't usually talk this much."

A question about his early days singing in traveling medicine shows fared no better.

"Uh, that's kind of twisted up," he said. "I won't go into that; that story is not exactly what it's supposed to be. I don't want to contradict anyone, but I won't touch it."

Richard, whose last album was a 1992 children's music release, has long and loudly championed himself as an innovator who never received the acclaim he believes he deserves. Yet, he became unusually contemplative when asked just how aware he was of his pioneering musical breakthroughs in the days before rock became a worldwide phenomenon.

"There's nothing new under the sun, truly, to God. Because that which is to be has already been, and God [remembers] all that is past. There ain't nothing new ... 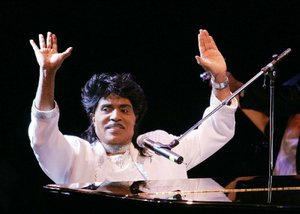 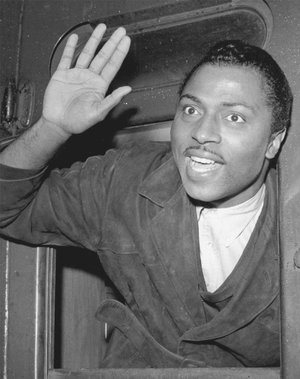 Photo by AP
Singer Little Richard waves goodbye from the United States boat train at Waterloo Station in Canada on November 20, 1963, on his way back to America. He is to become a minister of the Seventh Day Adventists early in the new year. (AP Photo)