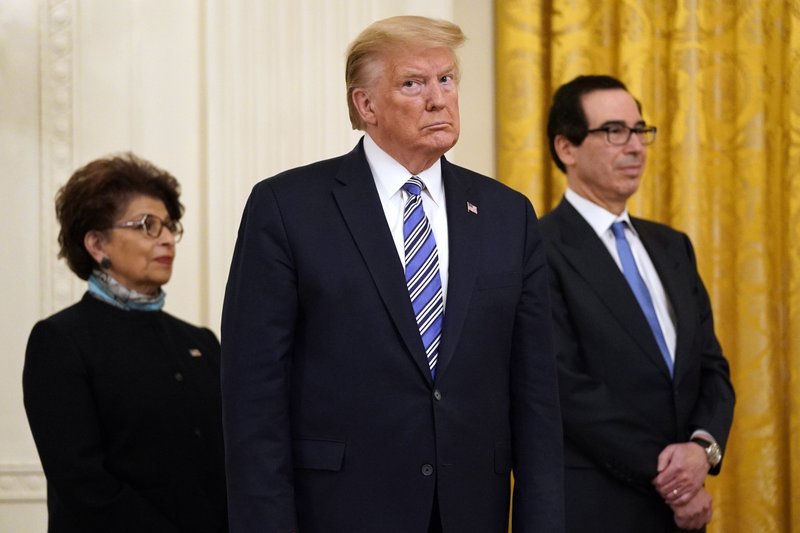 FILE - In this April 28, 2020 file photo President Donald Trump, along with Jovita Carranza, administrator of the Small Business Administration, and Treasury Secretary Steven Mnuchin listen during an event about the Paycheck Protection Program used to support small businesses during the coronavirus outbreak, in the East Room of the White House in Washington. (AP Photo/Evan Vucci)

WASHINGTON -- A small, overlooked federal agency is shouldering a massive relief effort for the nation's small businesses and their workers left reeling by the pandemic.

The Small Business Administration has committed to auditing every sizable emergency loan it approves.

But six weeks after the $600 billion-plus program was started, the agency has yet to make public the recipients of taxpayer aid.

A signature piece of Congress' multitrillion-dollar pandemic rescue, the unprecedented lending program is targeted to help small employers stay afloat and preserve jobs in a cratering economy losing tens of millions of them.

Managing the program fell to the Small Business Administration, an agency with some 3,200 employees and an $819 million annual budget that's one-tenth the size of the Commerce Department's. On at least two occasions last month, the Small Business Administration's computer system slowed under the crush of loan applications, creating a bottleneck. The agency says that so far it has processed 4.2 million loans for some $530 billion in awards.

The need for a detailed public accounting of the small-business relief program is amplified by controversy over how it has unfolded since early April. It's important as a way for the public to know whether the program is working as Congress intended.

Several hundred publicly traded companies received hundreds of millions of the low-interest, potentially forgivable loans. They tapped the federal aid despite their likely ability to get the money from private financial sources. Some had market values well over $100 million, and many had executives earning millions annually.

On its website, the Small Business Administration says it "is becoming more transparent, participatory and collaborative through open government." It cites, among other things, its Freedom of Information Act program and improvements to online services.

So far, the agency has only provided general information, such as the total amounts of loans awarded in a given time period.

With huge amounts of money flying out the government's door in a crisis, full public disclosure can help prevent fraud and improper spending, says Kathleen Clark, a law professor at Washington University in St. Louis and expert in government ethics.

Otherwise, "the risks to taxpayers are greater," Clark said. "I would think the SBA would be proactive in making information public."

Asked by news organizations for information on the companies receiving loans and when it might be provided, the agency has said it's too consumed now by the urgent effort of helping small businesses through the economic downturn. It says specific loan data may be released sometime "in the near future."

"At this time, the agency is focusing its efforts on assisting small businesses during this unprecedented disruption to the economy," the agency says. "The agency recognizes the need to balance the interests of transparency with the privacy and confidentiality issues release of loan information raises."

It was news reports of big companies receiving loans that sparked the public outcry. The Associated Press and several other news organizations combed through voluminous filings with the Securities and Exchange Commission to unearth public companies that had received Paycheck Protection Program loans. The Small Business Administration did not make the information public.

That may be surprising because, until now, the Small Business Administration has regularly released information on businesses that have borrowed under its main lending program, the so-called 7(a) program.

In fact, the loan application for the Paycheck Protection Program includes this notice to potential borrowers: Under the Freedom of Information Act and with certain exceptions, the Small Business Administration "must supply information reflected in agency files and records to a person requesting it."

Several news organizations, including The Washington Post and The New York Times, have sued the Small Business Administration in federal court over its not having released the loan data despite several Freedom of Information Act requests. They accuse the agency of violating the information act. The Small Business Administration has declined to comment on the lawsuit.

Amid the public outcry, Mnuchin recently threatened criminal prosecution and warned companies they must return the money if they falsely certified that they needed federal aid to operate and couldn't get it elsewhere. But recently, the Small Business Administration issued revised guidance indicating that criminal action won't be pursued if companies found to have falsely certified their needs return the money.

Elsewhere in the government, the Treasury Department recently released an accounting of its emergency lending program for airlines and air cargo carriers under the pandemic relief legislation. Under the program, companies are required to use the funds exclusively for employee salaries. The names of companies and amounts of loans or grants they will receive are provided.

So far Treasury has approved about $25 billion in aid to 352 applicants, including all the major passenger airlines and some 260 smaller passenger carriers.

Information for this article was contributed by Reese Dunklin of the Associated Press.