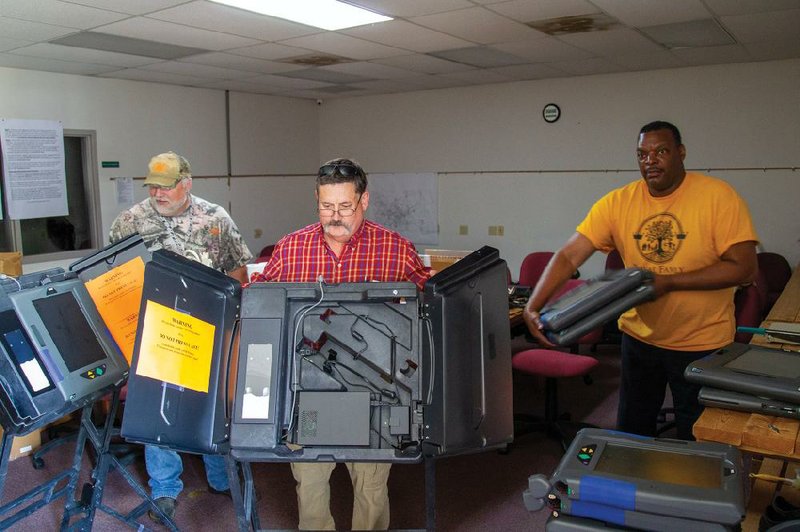 Jefferson County Employees, from left, Luke Eheman, Warner Worthan, and Anthony Royal salvage some electrical components from voting machines at the Jefferson County Election Commission office in preparation for discarding the machines. The iVotronics touch-screen machines that have been in use for elections since 2003 will soon be replaced by the newest generation of voting machines from Election Systems & Software, the Nebraska company that supplies most of the counties in Arkansas with voting systems. (Arkansas Democrat-Gazette/Dale Ellis)

PINE BLUFF -- Election officials in Jefferson County are breathing a sigh of relief as the expected delivery date for new voting equipment draws near. The new equipment, supplied by Election Systems and Software, a Nebraska-based voting machine equipment and services vendor, is scheduled to be delivered this week, according to Jerry Amick, the state manager for the company.

Amick met with Jefferson County election officials, the county judge, county clerk, and representatives from their offices on Wednesday to provide the delivery update, and to brief officials on some of the features of the equipment and the training protocols that will need to be put into place.

"I can't tell you how excited we are for you guys to be getting new voting equipment," Amick said. "Of all the counties in Arkansas, you probably need it as bad as anybody."

As recently as the March 3 primary, Jefferson County voters cast their ballots on aging Election Systems and Software iVotronics touch-screen voting machines that had been in use since 2006. Over time, because of age and improper storage, the machines had become balky and prone to glitches.

An original estimate for the machines put the cost at nearly $940,000, and under a cost-sharing plan initially proposed by the secretary of state's office, Jefferson County would have had to come up with just over $320,000, money the cash-strapped county did not have.

The emergence of the coronavirus pandemic -- which first surfaced in Arkansas in Jefferson County -- has only worsened the county's precarious financial condition.

The equipment is being purchased with state and federal funds that were freed up by the secretary of state's office to buy equipment for nine counties in Arkansas that have not yet upgraded to new voting equipment. The nine counties -- Bradley, Conway, Fulton, Jefferson, Lee, Monroe, Newton, Searcy and Stone -- had been struggling to come up with matching funds, which had been required before the pandemic.

The estimated cost to provide all nine counties with new voting equipment is $2.7 million.

Kevin Niehaus, public relations director for the Republican secretary of state, told the Arkansas Democrat-Gazette last month that the economic impact of the pandemic had prompted the secretary of state's office to reassess its plan for cost-sharing in the nine counties.

"With the counties needing to realign their fiscal priorities, it became apparent to us that fully funding the election equipment for these counties was the only viable option," Niehaus said in a written statement. "With the integrity of our elections at stake, having all 75 counties working off the new equipment has always been a top priority."

Amick told officials that the Jefferson County will need to provide assistance unloading the machines when they arrive.

"What a lot of the counties do is they'll go to the sheriff and get prisoners, trusties, that type of people, the road department, county people to help," he said. "Because they're going to have to break the pallets out and carry the stuff in."

"The only thing we need to know is the date and time, and we'll make sure we have the people to help," Robinson told Amick.

Amick said technicians from Election Systems and Software would go to Jefferson County to unpack and assemble the voting equipment. He suggested that the commissioners arrange for the county's election technicians to be on hand when the equipment is assembled.

"They don't have to be here the whole time, but I would advise them as they're putting stuff together, our technicians, that they are around them for parts of it," he said. "The more you see it, the more hands-on you see, the more familiar you'll get with the equipment a lot quicker. It'll help your training go better."

He suggested to County Clerk Shawndra Taggart that she arrange to have some of her clerks on hand to observe the testing on the poll books, which are used during early voting and on Election Day to check voters in at the polls and assign the proper ballot style for the precinct in which the voter lives.

He said the poll books can be linked via Wi-Fi connection so that all are updated as voters are checked in. That function, he said, is primarily used in counties that use vote centers to ensure that no voters attempt to vote in multiple locations.

Unlike poll sites, which require voters in specific precincts to vote in specific locations, vote centers allow all voters in the county to vote at any one of a number of sites, regardless of what precinct they are assigned to.

Jefferson County does not currently use vote centers, but the idea has been discussed at several commission meetings in the past. Although Soffer and Commission Chairman Michael Adam have supported the idea, Commissioner Theodis "Ted" Davis, citing fears of voter suppression, has opposed the idea. A unanimous vote of the commission is required to make changes to any voting locations.

Once training on the new equipment begins, Amick said, it will require a full two days with about four hours of training dedicated to each of the four components of the voting hardware package. The components consists of a ballot scanner, a ballot marker, a poll book, and the Election Reporting Manager, which is used to compile and verify election results once voting concludes.

The training sessions, he said, consist of nuts-and-bolts orientation to get election officials familiar with the operation of the components, and instruction on how to train poll workers on the operation, what he called "train the trainer" sessions.

"I'd recommend that you kind of push it out a little bit because if we train you June 1st and you've got to wait until November to use it, you're going to lose it," he said.

The need to familiarize voters with the new equipment was raised as an issue that should be addressed.

"I'm hoping the commission will consider at some point setting up the equipment in faith-based organizations, City Hall, or the county buildings to familiarize our voters with the new voting equipment," Davis said.

Soffer said he had contacted the secretary of state's office about setting up a voting machine for demonstration at their booth during the business expo that's currently scheduled for Aug. 6 at the Pine Bluff Convention Center.

"We could set one up in the courthouse rotunda," he said. "Or I'm thinking Walmart."

"I'm just thinking that with new equipment, people need to see it," Davis said. "Voters need to touch it prior to Election Day."

Amick said that before the coronavirus crisis, most counties he dealt with had arranged for public demonstrations of the new equipment.

"At minimum, they were setting it up in the clerk's office or in the county courthouse," he said.

After the meeting, Amick told the Arkansas Democrat-Gazette that optimally, the training for election officials should be scheduled for late summer.

"They've got to train all of their poll workers, so late summer, July or August," he said. "It depends on how much work they're going to do ahead of the election, so if they're going to do some public education for the voters, if they need to take stuff out into the world they might want to get trained a little earlier."

Once the equipment has been assembled, tested and workers trained, its first use will be in the Nov. 3 general election. Taggart said her employees in the county clerk's office are looking forward to the rollout.