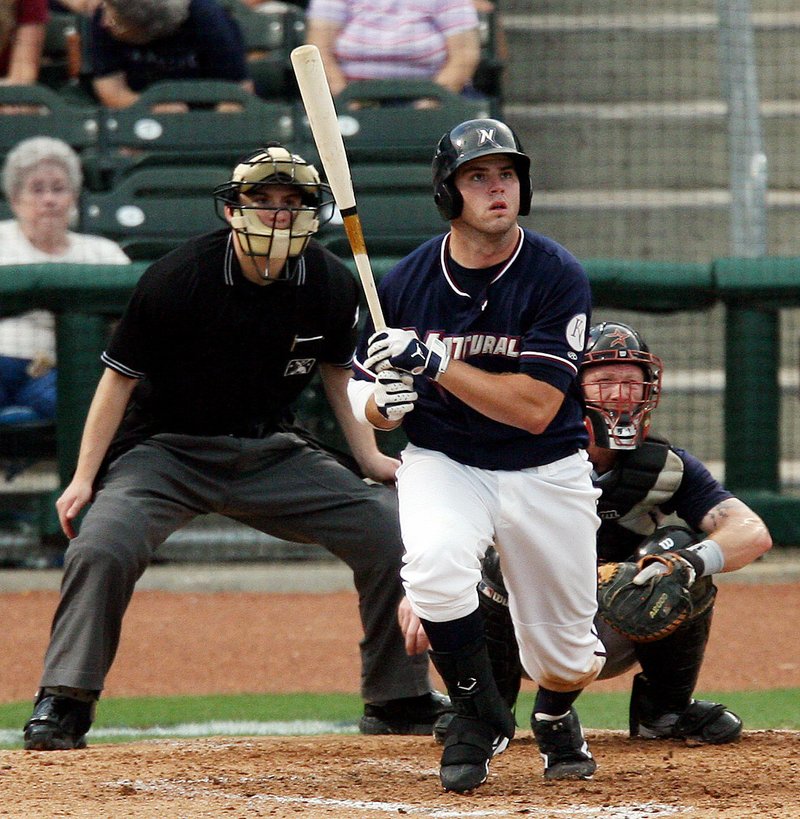 Arkansas Democrat-Gazette/WILLIAM MOORE Northwest Arkansas' Mike Moustakas scorched Texas League pitching for barely a half but still won Player of the Year honors in 2010. He would later help the Kansas City Royals to a pair of World Series appearances and a one championship.

Mike Moustakas hit home runs in his first two at-bats as a member of the Northwest Arkansas Naturals, serving as a harbinger to the team's 2010 season that finished with a Texas League championship.

He moved on after hammering Class AA pitching for just 66 games. But along came Eric Hosmer, another first-round MLB Draft pick. He picked right up where Moustakas left off, homering in his first Texas League at-bat.

It's no shock both Moustakas and Hosmer were easy selections as part of the all-time top 10 Naturals in a recent poll, serving as a 1-2 punch to the team's lone championship season in 12 years. Add in slugger Clint Robinson, along with pitchers Everett Teaford and Danny Duffy, and half of the top 10 have something in common.

They were all a part of the 2010 Naturals which torched the Texas League. Moustakas, Hosmer and Duffy all went on to the major leagues and helped the Kansas City Royals claim back-to-back American League pennants and win the World Series in 2015.

Former Naturals manager Brian Poldberg put Hosmer and Moustakas in a class by themselves while looking at the list. Moustakas hit .347 with 21 home runs and 76 RBI and 24 doubles in 259 at-bats in 2010. He would claim Texas League Player of the Year honors long after he left Northwest Arkansas.

Hosmer followed with a .313 average, 13 home runs and 35 RBI, not to mention a huge home run in the playoffs to help lift the Naturals to the title.

"I think we were the best team in Double-A," said Poldberg, who managed the Naturals from their inception in 2008 until he moved to Class AAA Omaha in 2014.

Vance Wilson followed Poldberg as Northwest Arkansas' manager, but he also pointed to the 2010 team as setting the pace.

"That team put Northwest Arkansas on the map," said Wilson, who now serves as the Royals' third-base coach. "Other teams were lucky to be a part of after that, That 2010 team set the bar.

"They went on and did it for teams in Kansas City. They won a World Series for an organization that had been down."

Wilson said Moustakas is called an underachiever in some circles. But he doesn't think so.

Poldberg also pointed to catcher Salvador Perez who would go on to be the backbone of Kansas City's world championship team. He made another short stop in Northwest Arkansas in 2011, hitting .283 with 9 home runs and 43 RBI in 79 games. That doesn't include his leadership and ability to shut down a running game with his powerful arm and quick release.

"I called him the Energizer Bunny with his energy and his smile," Poldberg said. "He was a phenomenal person and phenomenal player."

The remainder of the top 10 includes Kila Ka'aihue, the Texas League Player of the Year in 2008, along with outfielder Wil Myers, third baseman Mario Lisson and pitcher Yordano Ventura.

Only Lisson didn't make the major leagues of the top 10.

Myers and Ventura took a little time to develop, but both skyrocketed in their second season in Northwest Arkansas.

"Myers had all kinds of ability, he could do it all," Poldberg said. "He just wasn't into it mentally all the time I didn't think."

Ventura, whose career was cut short by his untimely death in a car crash in the offseason in 2017, harnessed his command and skyrocketed to the major leagues in 2013. The hard-throwing right-hander dominated, despite the 3-2 record in 11 starts. He fashioned a 2.34 ERA to go with 74 strikeouts in 57 2/3 innings and 20 walks and finished the season with the Royals.

Wilson said watching Ventura mature as a pitcher in Northwest Arkansas was special.

"When you get to the Double-A level, it doesn't matter how hard you throw," Wilson said. "He figured that out at that level. The way he was built you figured he would be in the major leagues for a long, long time."

Teaford set himself up to get to the big leagues, winning 14 games in Northwest Arkansas, Poldberg said.

Robinson recalls taking a curtain call after earning the triple crown on the final day of season.

"You don't see a lot of that in the minor leagues, but [Poldberg] brought me out of the game," Robinson said. "That was really fun, but a nerve-racking game."

He also credited teammates like Johnny Giavotella and Anthony Seratelli for doing things to help him earn that special honor.

"They pushed some things on the bases and probably did some things they shouldn't have," Robinson said. "They played with a passion and did it when the lights were brightest."

Ka'aihue was another who tore up the Texas League and earned player of the year honors in 2008 despite playing in only 91 games. He hit .314 with 26 home runs and 79 RBI.

Cole recalled seeing him in Wichita in 2007, but he was a different player in the Naturals' inaugural season in 2008.

"Kila hit a home run in our home opener," Cole said. "He came in and was the Barry Bonds of the Texas League that year."

"He was always right there about to turn the corner, then he gets hurt or hits a slump," Cole said.

Wilson said the top 10 was a fair representation, but he would probably give a vote to slugging first baseman Balbino Fuenmayor. He hit .354 with 15 home runs and 51 RBI in 73 games.

"What that kid did that season was pretty special," Wilson said. "We don't win the first half without him doing what he did."

Poldberg also said Giavotella and Jorge Bonafacio deserved consideration on the list, too. 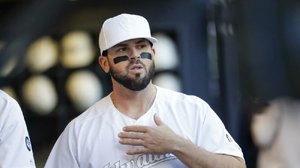 Photo by AP
Milwaukee Brewers' Mike Moustakas is seen during the first inning of a baseball game against the Arizona Diamondbacks Friday, Aug. 23, 2019, in Milwaukee. (AP Photo/Morry Gash) 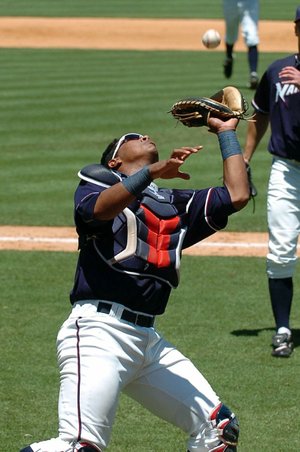 Photo by Anthony Reyes
Salvador Perez played for the Northwest Arkansas Naturals in 2011. Perez, who hit .283 with 9 home runs and 43 RBI in 79 games that season, was the starting catcher for the Kansas City Royals in 2014 and 2015 when they won consecutive American League pennants and the 2015 World Series. (NWA Democrat-Gazette file photo)