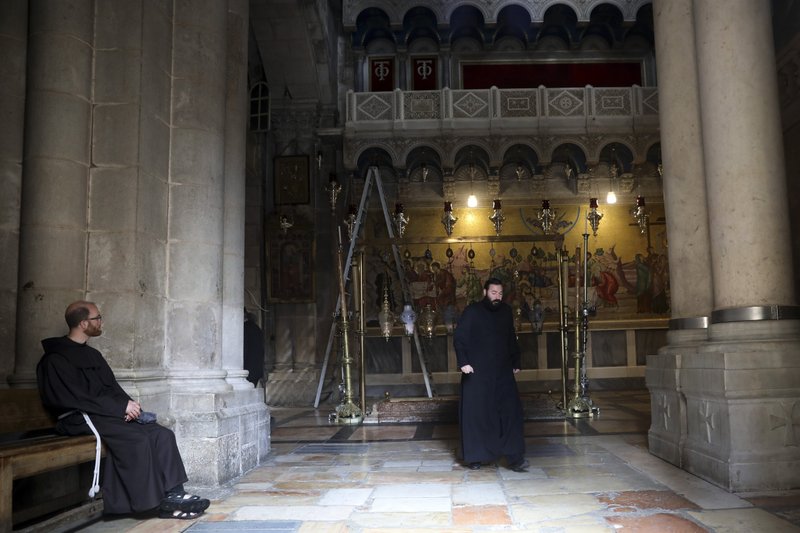 Entry to the Church of the Holy Sepulcher in Jerusalem’s Old City was limited to 50 people at a time Sunday. (AP/Mahmoud Illean)

LONDON -- Prime Minister Boris Johnson said Sunday that he wouldn't fire his chief aide for violating the national lockdown rules by driving the length of England to his parents' house while he was infected with the coronavirus.

Defying a growing clamor from the public and politicians, Johnson said Dominic Cummings had acted "responsibly, legally and with integrity" when he drove 250 miles from London to Durham, in northeast England, with his wife and son at the end of March.

Britain's lockdown stipulated that people should remain at their primary residence, leaving only for essential local errands and exercise. People with coronavirus symptoms were told to completely isolate themselves.

Cummings says he traveled to be near extended family because his wife was showing symptoms, he correctly thought he was also infected and he wanted to ensure that his 4-year-old son was looked after.

Johnson said Cummings had "followed the instincts of every father and every parent." He said the family followed the rules by self-isolating for 14 days once they reached Durham.

But critics expressed anger that Cummings had broken strict rules that for two months have prevented Britons from visiting elderly relatives, comforting dying friends or even attending the funerals of loved ones. The opposition Labor Party has called for an investigation.

Labor leader Keir Starmer said Johnson's defense of Cummings was "an insult to sacrifices made by the British people."

"The prime minister's actions have undermined confidence in his own public health message at this crucial time," he said.

Former Labor lawmaker Helen Goodman, whose father died in a nursing home during the outbreak, said Cummings' behavior was "repellent."

JERUSALEM -- Jerusalem's Church of the Holy Sepulcher reopened to visitors Sunday after a two-month closure resulting from the coronavirus pandemic.

The church, situated in Jerusalem's Old City, is the site where many Christians believe Jesus was crucified, entombed and resurrected. The Christian authorities managing the site closed it to visitors, but clerics maintained prayers in the church.

On Sunday, church authorities limited entrance to 50 people at a time, and required that those entering the cavernous site maintain social distance and avoid touching any of the church's stones, icons or other religious items. A typical day before the pandemic would bring thousands of faithful who kissed or placed their hands along the church's surfaces.

As priests from the various Christian sects entered, a handful of faithful waited outside for the church to open to the public.

Israeli authorities have gradually reopened schools, houses of worship and markets as the spread of the novel coronavirus has slowed.

TUNIS, Tunisia -- At least one migrant has drowned, six are missing and more than 80 have been rescued off Tunisia's coast, authorities said, amid a new wave of attempts to traffic migrants across the Mediterranean Sea into Europe.

The Tunisian coast guard rescued 11 migrants after an emergency call from a boat that was filling with water Saturday off the city of Sfax, said coast guard spokesman Lt. Houssameddine Jbabli.

Divers from the Tunisian emergency services retrieved one body and the captain and chief trafficker fled, he said. Six others who had been aboard the boat are missing, Sfax Gov. Anis Oueslati told the national news agency TAP.

The coast guard also rescued 70 people from another boat in poor condition off the Kerkennah Islands, the governor said.

The North African nation of Tunisia has thwarted 10 smuggling attempts to send migrants across the Mediterranean in the past two days, primarily to nearby Italy, the coast guard spokesman said. The attempts come as European countries start to relax strict lockdowns to prevent the spread of the coronavirus.

Tunisian authorities detained 223 people, including 94 migrants from sub-Saharan Africa, in those efforts.

MINSK, Belarus -- About 1,000 protesters denouncing authoritarian Belarusian President Alexander Lukashenko's seeking of another term in an upcoming election have held the largest opposition demonstration of the year in the capital Minsk. 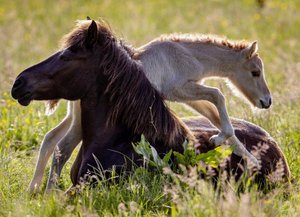 A 2-day-old Icelandic foal jumps over its mother Sunday on a stud farm in Wehrheim, Germany. (AP/Michael Probst)

Many of the demonstrators carried slippers as a symbol of protest leader Sergei Tikhanovsky's call to "smash the cockroach."

Police, who frequently break up opposition demonstrations, didn't interfere with the protesters Sunday.

The Aug. 9 election will see Lukashenko, who has suppressed opposition and independent news media during a quarter-century in power, run for a sixth term.

Many of the demonstrators wore masks, defying Lukashenko's dismissal of coronavirus concerns as a "psychosis."