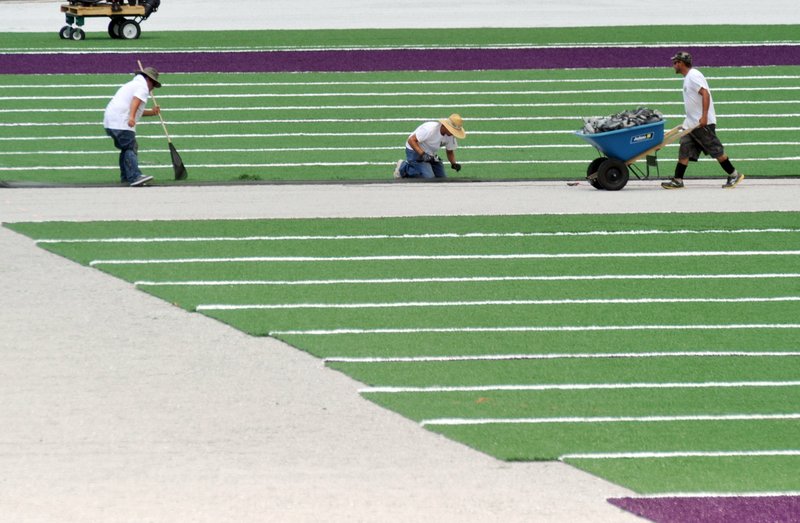 FILE -- Workers get ready to put down a strip of AstroTurf at Harmon Field at Fayetteville High School in July 2012, the last time the turf was replaced. The School District is preparing to replace the turf again this summer. (Arkansas Democrat-Gazette/MICHAEL WOODS)

Fayetteville will have a new synthetic turf to play on when the Bulldogs hold their football home opener against Owasso, Okla., on Sept. 4.

Work is underway at Harmon Field, where an artificial surface that was laid down in 2012 is being replaced by a new and more advanced turf and rubberized track around the football field. The Fayetteville School Board voted unanimously on April 23 to approve the project, which is scheduled to be completed by June 30.

Fayetteville will host Owasso after the Bulldogs open the season at Conway on Aug. 28. When team sports are allowed to resumed, Fayetteville will use its baseball field, indoor facility, and weight room to conduct workouts until the project is completed.

The school board agreed to pay Hellas Sports Construction, an Austin, Texas-based firm, $518,841 with an addition $188,950 for cushdrain pad made of rubber and plastic that will be placed under the turf as a safety measure to improve shock absorbency.

"We are excited for our students and programs that will benefit from the Harmon Stadium field and track remodel," Fayetteville Director of Athletics Steve Janski said. "The cushdrain pad which is currently being installed provides added safety and dramatically improves shock absorption which reduces potential for concussions. In addition, we are excited to showcase a high performance Hellas helix technology playing surface for our football and soccer teams. Our students and fans will be coming back in the fall to a safe, high performance, and beautiful upgrade to historic Harmon Stadium."

The cushdrain pad comes with a 25-year warranty. Hellas did Fayetteville's baseball and softball fields, and the surface at the school's indoor facility. District officials were pleased with the results and turned to Hellas again when the decision was made to re-surface Harmon Stadium.

"Fayetteville is paying a good chunk of change, but it's clear they've made a commitment to protect their kids," said David Fisher, Business Development Manager for Hellas Sports Construction. "Most turfs last 7-8 years before they wear out. Ours is a third-generation, high quality turf that lasts 10.8 years on average, and it comes with a 25-year warranty for the padding underneath."

Fisher said Fayetteville and Little Rock Christian are both currently being fitted with new turf in Arkansas.

In addition to laying down a new surface, Hellas workers are pouring concrete and moving bleachers for the band from the south to beyond the north end zone near at Harmon Field. That's a move to enhance the game day atmosphere for Fayetteville fans, particularly the students.

"Our student section is on the north end and we want our band up there as well," Fayetteville football coach Casey Dick said. "That'll create a more rowdy environment and increase the excitement for our fans and our football team."