NHL to begin with playoffs if able to resume its season 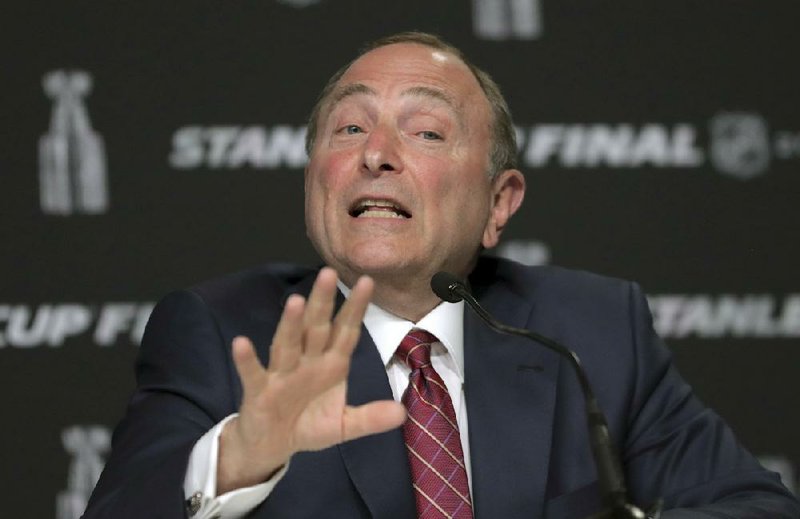 NHL Commissioner Gary Bettman announced Tuesday that the league will begin its postseason with 24 teams, instead of the normal 16, if it is able to resume play. (AP file photo)

The NHL will abandon the rest of the regular season and go straight into the playoffs with 24 teams instead of 16 if it is able to resume play.

The decision, announced Tuesday by Commissioner Gary Bettman, is no guarantee that games are coming back. The NHL and the NHL Players' Association must still figure out health and safety protocols and solve other issues.

Ironing out the format and narrowing down its two potential playoff host cities to a list of 10 represents significant progress since global sports were largely shut down in March as the coronavirus outbreak turned into a pandemic. Play could resume in late July, with the Stanley Cup Final decided in September or even later.

Groups of 12 teams representing each of the two conferences will be limited to playing in two cities, yet to be determined, with three-week training camps opening no earlier than July 1. Bettman said voluntary workouts could begin in early June.

"We hope this is a step back toward normalcy," Bettman said.

Earlier this week, the league and NHLPA issued extensive protocols once players are allowed to return to their facilities. They include a maximum of six players on the ice at a time, no contact and no coaches for voluntary workouts.

Instead of limiting the Cup chase to the usual 16 teams that qualify for the playoffs, the league and players agreed to expand the field to 24 of its 31 teams because of the unusual circumstances.

That means the likes of the Montreal Canadiens are still alive despite being nine points out of a playoff spot when hockey was halted March 12. But not all teams will have the same path to hockey's storied trophy.

The top four teams in each conference ranked by points percentage -- Boston, Tampa Bay, Washington and Philadelphia in the East, and St. Louis, Colorado, Vegas and Dallas in the West -- will play separate round-robin tournaments to determine seeding.

"Any plan for the resumption of play by definition cannot be perfect," Bettman said. "But we believe we have constructed an overall plan that includes all teams that as a practical matter might have had a chance of qualifying for the playoffs when the season was paused, and this plan will produce a worthy Stanley Cup champion who will have run the postseason gauntlet that is unique to the NHL."

Games are expected to be played in two hub cities, and Bettman said cities in the running are Chicago, Columbus, Ohio, Dallas, Las Vegas, Pittsburgh and Minneapolis/St. Paul in the U.S.; and Edmonton, Toronto and Vancouver in Canada.

While there are still details to work out, Bettman said he expects the best-of-seven Stanley Cup Final to be played in full in one of the two hub cities. Each team would be limited to a total of 50 people in the city it plays in.

"It's not easy getting everybody on board with all the different countries, the players, the teams that were in the playoffs, teams that may not be in the playoffs and getting that all agreed upon with the union," Buffalo Sabres owner Kim Pegula told The Associated Press. "For us to even finish the season and award [the Stanley Cup], I know a lot of work went into it. But I know how important it was for our players, our fans, our league to make sure that we conclude it."

The decision to call off the 189 regular-season games that were not played ends the season for Buffalo, New Jersey, Anaheim, Los Angeles, San Jose, Ottawa and Detroit.

Those seven teams will now prepare for one of potentially two draft lotteries to determine the top 15 selections. The lottery will be held June 26, with another scheduled later depending on which of the remaining eight teams qualify for the 16-team playoff.

Print Headline: NHL to begin with playoffs if able to resume its season