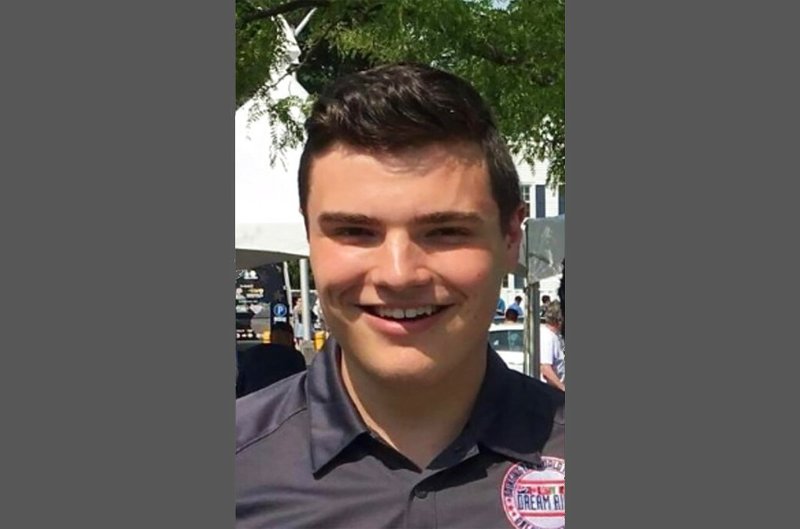 This undated photo provided by the Connecticut State Police shows Peter Manfredonia, a college student suspected of killings in Connecticut.

HARTFORD, Conn. — A college student sought by police as a suspect in two slayings in Connecticut has been captured, Connecticut State Police said Wednesday night.

Peter Manfredonia, 23, had been the subject of a six-day search involving several police agencies and the FBI.

He was found in Hagerstown, Md., after a ride-hailing service dropped off someone matching his description Wednesday. He was not injured, and neither were any officers, during the arrest, police said.

Manfredonia was wanted in the machete killing of 62-year-old Ted DeMers and the wounding of another man in Willington, Conn., on Friday.

The University of Connecticut senior also went to another man’s home, held him hostage, stole his guns and truck and drove about 70 miles southwest to Derby, Conn., state police said.

In Derby, police found Manfredonia’s high school friend, Nicholas Eisele, 23, shot to death in his home on Sunday. Authorities believe Manfredonia then forced Eisele’s girlfriend into her car and fled the state. The girlfriend was found unharmed with her car at a rest stop near near Columbia, N.J.

HARTFORD, Conn. — A lawyer for the family of a fugitive college student said Wednesday the 23-year-old suspect in two Connecticut slayings has no outdoor survival training and his parents are begging him to bring a peaceful end to the search that has stretched to Maryland.

Since the first homicide on Friday, investigators have followed the trail of Peter Manfredonia through New Jersey and Pennsylvania, where police on Wednesday said someone matching his description took a ride-hailing service to the Hagerstown, Md., area.

An attorney for Manfredonia’s family, Michael Dolan, told The Associated Press they are worried for the well-being of the University of Connecticut senior.

“That’s why they are extending this message. They’re there for you. They are going to support you through this with their resources, their love and support,” said Dolan, who declined to say whether Manfredonia has been in contact with his family. “They are begging him to put a peaceful end to this.”

Manfredonia is wanted by Connecticut state police in the machete killing of 62-year-old Ted DeMers and wounding of another man in Willington on Friday. Manfredonia went to another man’s home, held him hostage, stole his guns and truck, then drove on Sunday about 70 miles southwest to Derby, Conn., state police said.

Police say Manfredonia went to the home of a high school classmate, Nicholas Eisele, shot him to death, forced Eisele’s girlfriend into her car and fled the state. The girlfriend was found unharmed with her car at a rest stop on Interstate 80 in Columbia, New Jersey, police said.

Manfredonia then took an Uber to a Walmart in East Stroudsburg, Pa., not far from the New Jersey border, Pennsylvania State Police said. He was seen walking in a wooded area on some railroad tracks.

“He’s an intelligent young man, but he’s had no specific training to survive out in the woods,” Dolan said.

Police in Duryea, Pa., about 50 miles away, said a firefighter spotted a man matching Manfredonia’s description and carrying a large backpack on Tuesday night.

A car that police said might have been stolen there by Manfredonia was recovered in Chambersburg, Pa., on Wednesday at a convenience store where the ride-hailing service picked up someone matching his description and drove to Maryland, police said.

Police released pictures from the convenience store that show a man matching Manfredonia’s general description at the cash register. Police said he was wearing red sneakers.

Dolan said the actions of the last week are out of character for Manfredonia, who was an honors engineering student at UConn. He said the Newtown native had a history of depression and anxiety, but would not say whether he was on any medication for those conditions.

“This came as a total surprise to everybody based on Peter’s past,” he said. “He’s been a kind-hearted person who has no history of violence or any trouble with the law.”

Information for this article was contributed by Dave Collins of The Associated Press.