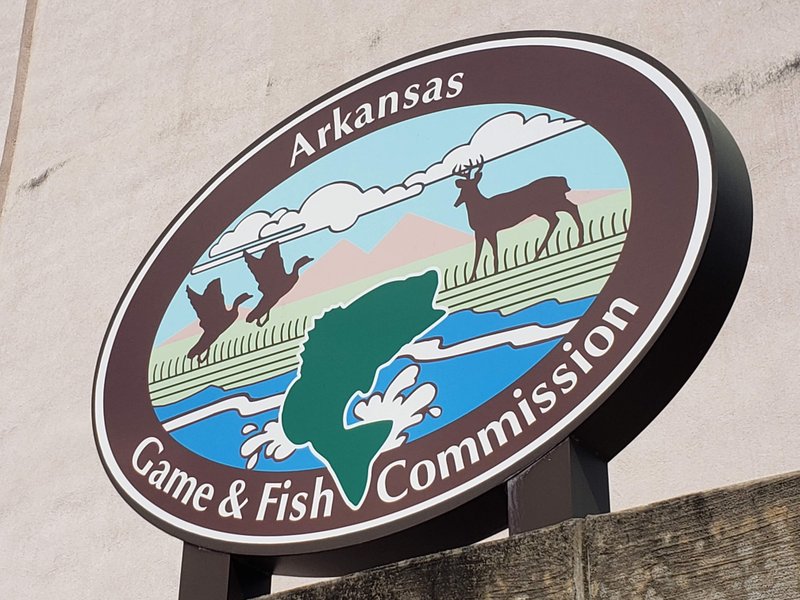 An Arkansas Game and Fish Commission sign in downtown Little Rock is shown in this 2019 file photo. (Democrat-Gazette file photo)

Reptile enthusiasts have expressed opposition to a new restriction that adds five species of large Asian and African pythons to Arkansas' list of prohibited captive wildlife.

The approved regulations bar anyone who did not hold a permit as of May 21 from the breeding, sale and importation of 30 mammal species, eight reptile species and 123 amphibian species.

People with an existing permit can continue to breed, import and sell these animals, but no new permits will be issued under the regulations approved May 21 during a meeting of the Arkansas Game and Fish Commission.

No one in Arkansas currently holds an active permit to import, breed or sell the varieties of large pythons restricted by the regulation, according to commission spokesman Keith Stephens. Only one permit for the breeding and sale of pythons has been issued since 2001 and it has expired, he said.

"Provided that one of these species was legally imported into Arkansas, a permit is not necessary to simply possess the animal," Stephens wrote in an email. "They can still be kept under Commission non-native pet regulations that have certain restrictions (such as males and females must be kept separately so that they cannot breed)."

Along with the five pythons, other additions to the list include predators like the jaguar and snow leopard; large mammals such as the warthog, rhinoceros and hippo; and the capybara, a South American mammal known for being the world's largest rodent.

Stephens said the breeding, sale and importation of large pythons has been banned in most circumstances in Arkansas for several years because the commission's code incorporated the federal ban on transporting so-called "injurious wildlife."

"In practical terms it would be extremely difficult to have met the code requirements at the time," Stephens wrote.

But revisions to the commission's code in February 2019 removed the reference to the federal list. The May 21 regulatory change essentially closes the door to any future breeding and selling of large pythons in Arkansas because no one holds a permit at the moment.

Phil Goss, president of the U.S. Association of Reptile Keepers, said his group thought the commission overstepped by listing the pythons as prohibited, "especially considering some of the other species that are found on the unrestricted and permitted lists."

Big snakes are an issue in south Florida because of the climate, Goss said, but he argued the snakes cannot survive a winter in the wild in places like Arkansas. Escaped Burmese pythons in the Everglades have proved to be an ecological problem because the snakes, an invasive species, prey on native wildlife there.

The closest region that might be able to support one of the banned species, the reticulated python, is the area near Brownsville, Texas, hundreds of miles away, Goss said in an interview Wednesday.

"I don't even think you could get a member of [Arkansas Game and Fish Commission] staff that would tell you that they thought these species could survive and populate in Arkansas," Goss said.

Goss, a reptile breeder who lives in Indiana, said the state-level rule change "certainly will prohibit some future work with those species."

Anya Littlefield runs a reptile breeding operation called Snake Eyes Exotics in Benton with her husband Matt. They specialize in raising the ball python, a smaller python species that typically does not grow beyond 5 feet in length, according to Littlefield.

Littlefield said Tuesday that she views the rule change as a move that takes away an individual's ability to own specific animals.

"They're regulating something that hasn't been proven to be an issue," she said.

Like Goss, Littlefield said that even if pythons escaped or were set loose by irresponsible owners, the reptiles would not survive in Arkansas for long.

"I mean, these pythons flourish in tropical Asia, and they're not going to survive a winter here," she said.

Littlefield suggested that regulatory changes like this are based on "knee-jerk reactions rather than actual fact."

Robert Neal, a reptile enthusiast in Little Rock, voiced his dissent during the May 21 commission meeting. He said Tuesday that he opposes the regulatory change, and described the commission as "biased against the private sector on this, for quite some time."

Neal argued that large constrictors belong on the permitted captive wildlife list in light of the caging and breeding restrictions that come with that status, as well as for the sake of consistency.

Neal said he has kept and bred reptiles in the past as a private citizen and in university settings. He declined to say which animals he currently owns and would not comment on whether he owns any animals in violation of the law.

He acknowledged he has previously tangled with commission officials and wildlife officers. He described one incident when two wildlife officers searched his house in order to view a captive American alligator. Neal said he held a letter of authorization that entitled him to keep the animal for educational purposes.

Neal said the state would be better off working with permitted stakeholders to monitor what is happening with large, captive snakes.

"When you straight-out prohibit something, you create a black market," Neal said.

A federal law known as the Lacey Act already prohibits the importation or shipment of the five python species, which the government has classified as "injurious wildlife," into the U.S., or between the continental U.S. and outlying states and territories, without a permit from the U.S. Fish and Wildlife Service.

The new regulations passed last week become effective 10 days after the commission files them with the secretary of state's office, which should occur this week, according to Stephens. The changes were initially presented to the public through an online survey in March.

In February 2019, the commission approved regulations prohibiting the breeding, sale and importation of a slew of other species, including bats, mountain lions, raccoons, baboons and apes.