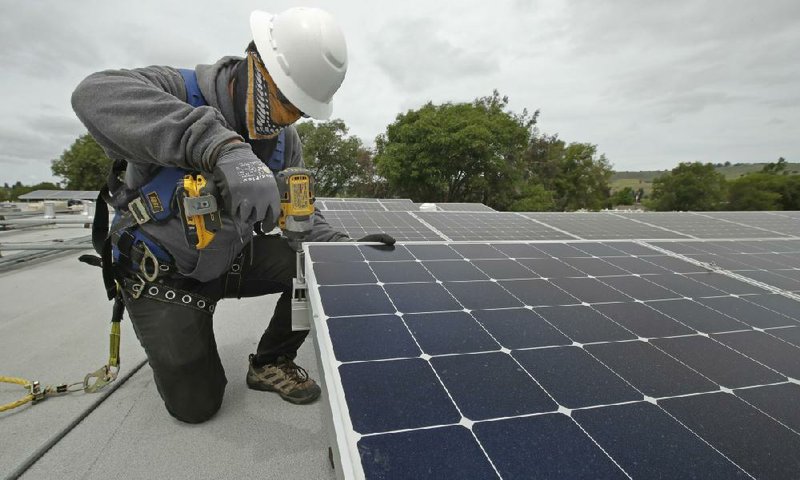 A worker installs solar panels on the roof of a building in Hayward, Calif., in April. Arkansas regulators have asked to intervene in a federal petition that could alter how consumers and businesses are compensated for solar power generated at homes and businesses. (AP/Ben Margot)

Arkansas regulators want a voice in a federal petition that could alter how consumers and businesses are compensated for solar power they generate at their homes and businesses.

The petition before the Federal Energy Regulatory Commission seeks to establish federal jurisdiction on key net-metering issues. Net metering allows solar users to sell the excess power they generate back to utility companies for use by all electric customers.

Today, net-metering issues are decided on the state level by utility regulators such as the Arkansas Public Service Commission. On April 30, the state commission filed a petition to intervene in the FERC case.

For example, he pointed to Arkansas Act 464, which was approved in the 2019 legislative session and is credited with boosting solar development across Arkansas.

On April 14, the New England Ratepayers Association asked the regulatory commission to "declare that there is exclusive federal jurisdiction over wholesale energy sales from generation sources located on the customer side of the retail meter."

In essence, the nonprofit group of ratepayers proposes federal jurisdiction over net-metering transactions.

Thomas is leading a committee of state regulators preparing a formal response in the docket. The National Association of Regulatory Utility Commissioners will oppose the measure from the New England ratepayers, Thomas said.

"I look forward to working with my colleagues at commissions around the country on this important issue," he added.

In Arkansas, net metering has been a contentious issue as solar advocates are battling an effort by utility companies to lower monthly credits to solar customers. A formal order is expected shortly from the Public Service Commission, which has held several hearings on the issue.

Arkansas Act 464 of 2019 introduced third-party financing of solar systems, which allows companies and government agencies to sign agreements to buy solar power from independent operators. The legislation sparked interest in solar usage from cities, counties, school districts and other public agencies that have established power arrangements with solar companies.

Entergy Arkansas, the state's largest electric provider, is monitoring the FERC case. "We are watching this proceeding closely because its resolution could have significant effects on net-metering policies," said David Palmer, director of regulatory affairs for Entergy Arkansas.

"In the meantime, we continue to work with our regulators on the important policy considerations involved in net metering, including ensuring that customers who do not net meter are not forced to subsidize net-metered customers," Palmer added. "We understand this latter point to be at the core of the petition for declaratory order proceeding brought to the FERC."

Under Arkansas' net-metering regulations, solar customers are given a credit of 10 cents for every kilowatt-hour they return to the power grid. That's the same amount Entergy charges homeowners for energy consumption, so it amounts to a 1:1 credit. Entergy contends that credit should be lowered to 3 cents per kilowatt-hour. Other electric utilities and industrial users who buy large volumes of power from the utilities have supported Entergy's position.

Solar companies and consumers want to keep the current rules in place, arguing that any alteration will undercut the intent of Act 464 and its contribution to the growth of solar power in the state.