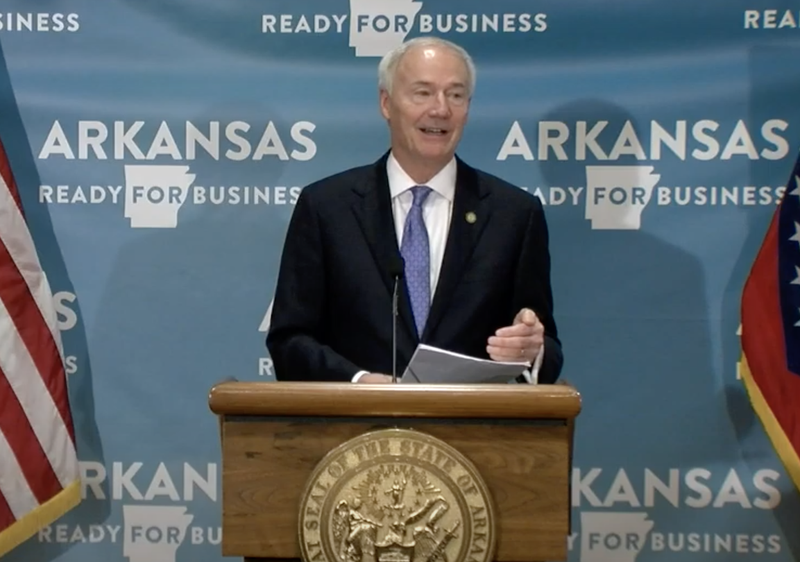 A daily record number of new covid-19 cases among the state’s nonincarcerated population, 261, was recorded Thursday, Gov. Asa Hutchinson said, and five more Arkansans have died of the virus.

No new cases were reported at correctional facilities in the state, and only eight were in nursing homes, meaning the vast majority of newly infected people are in the general population.

The five additional deaths bring the toll statewide to 125.

Smith said the increasing number of cases in Northwest Arkansas is driven in part by an increase in cases among the Latino population.

He said although some can be tied to workplace outbreaks at chicken or meat processing plants, the outbreak is wider among the Latino community and affects many young people.

To mitigate the spread, Smith said the state will continue testing at its local health units, organize more testing events and encourage businesses who are interested in testing workers to contact the department.

Hutchinson said the state also wants to increase outreach to the Hispanic community to provide more information on the virus, but did not offer specifics on what that would look like.

Since the outbreak began, Arkansas has seen 6,538 cases, and 1,830 of those remain active. Of the active cases, 71 are in nursing homes, 374 are in correctional facilities and 1,385 are in the general population.

Smith said of the total cases so far, about half have reported no symptoms at the time they tested positive. Because so many of the new cases are among younger people and many are asymptomatic, Smith said he expects a decreased rate of hospitalization compared to earlier in the outbreak.

The total number of active cases in Arkansas remained at 6,277 Thursday morning, according to the state Department of Health. The death toll remained at 120.

A total of 1,733 cases were reported to be active, while 4,424 people had recovered, the agency reported.

Check back to watch live video of the governor's briefing.

[Video not showing up above? Click here to view » https://www.youtube.com/watch?v=iOEZ-BA1ItU]