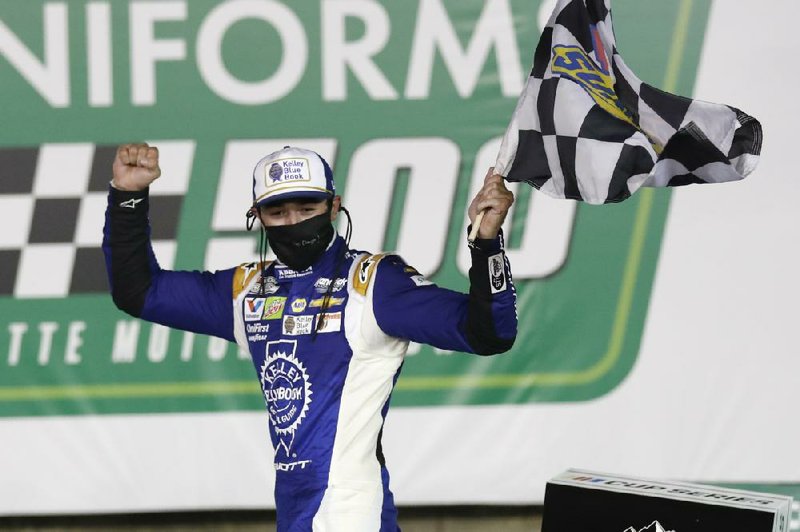 Chase Elliott celebrates after winning Thursday’s NASCAR Cup Series race at Charlotte Motor Speedway in Concord, N.C. It was the first victory of the season for Elliott, who has had two frustrating losses since racing resumed May 17. (AP/Gerry Broome)

Elliott won Thursday night in the rain-delayed event at Charlotte Motor Speedway to close a brutal 12 days for NASCAR. The event, postponed from Wednesday night, was the fourth Cup race since the series resumed racing May 17.

Elliott had two frustrating losses in that span, including Sunday night at the same track in the Coca-Cola 600 when a caution flew two laps from the finish while he was leading.

"Man, it's been a tough week for sure," Elliott said. "We've had some tough losses, but that deal on Sunday night was a heartbreaker."

Elliott's frustration began last week -- three Cup races ago -- when he was trying to race for the lead at Darlington Raceway and was wrecked by Kyle Busch.

Then he had the 600 checkered flag in site until a caution that was caused by his own teammate. Elliott pitted from the lead, took four tires and couldn't get back to the front in the two-lap overtime sprint.

There was little suspense in this one. Elliott reeled in Kevin Harvick with 27 laps remaining and closed out the victory. Elliott also won the Truck Series race Tuesday night at Charlotte to give him two victories in a four-race stretch at the track a few minutes away from the Hendrick Motorsports headquarters.

"It's not the Coke 600, but any win in the Cup Series is really hard to get," Elliott said. "I just really appreciate everybody at Hendrick Motorsports across the street here. Everybody's been working really hard."

Elliott was charging hard on Harvick with about 35 laps remaining when he asked over the radio if he had enough fuel to make it to the finish. Crew chief Alan Gustafson replied, "Yup. Go hard."

Elliott did just that. But after passing Harvick, with nothing but clear track in front of him, Elliott said he couldn't help but feel haunted by Sunday night.

"I was just waiting for the caution to come out," he said. "If the caution didn't come out, I was thinking I was probably going to break something or I was going to crash. After the last last couple weeks, surely it was going to go green until the end.

"Hopefully we're back on the right path."

Denny Hamlin finished second in a Toyota with three crew members sitting at home under suspension for an infraction Sunday night. His crew chief, car chief and engineer earned automatic four-race suspensions when a piece of tungsten fell off Hamlin's car on a pace lap.

Because NASCAR is holding all its events as one-day shows without qualifying or practice, Hamlin said his Joe Gibbs Racing team was able to push through the upheaval.

"The one-day format makes it easier for us," Hamlin said. "If we had qualifying, it would definitely hurt. But under these circumstances that we are in, it doesn't hurt that bad."

Ryan Blaney was third in a Ford for Team Penske, followed by Ricky Stenhouse Jr. for JTG-Daughtery Racing, a tremendous boost after a bad resumption of the season. Stenhouse wrecked on the first lap of the first race and finished last, then was 25th and 24th before Thursday.

Blaney, who is one of Elliott's closest friends, has been hosting Elliott as the sport has raced four times in five nights at Charlotte. He said Elliott was able to refocus on the Truck Series race after losing the 600, then after beating Busch to earn a $100,000 bounty for charity, Elliott shifted his attention to the Cup race.

"We talked about the race and that is just bad luck. He has had a lot of back luck," Blaney said. "With the 600, that stunk for him. We talked about it that night, but he was ready for the Truck race. We did talk and there was a couple hours of it. But he moved on and showed he could win two in a row."

Hamlin thought all the focus on Elliott's losses was overblown.

"Sometimes cautions are not going to fall your way," Hamlin said. "I think everyone feels bad because it is Chase and everyone loves him."

Asked if he felt sorry for Elliott, Hamlin answered with a definitive "No."

Elliott's victory was the first for a Chevrolet driver in NASCAR's return to Cup racing. Harvick won the first race back in a Ford, Hamlin won the second race in a Toyota and Brad Keselowski won the 600 in a Ford.

But Elliott and his Hendrick teammates have been very strong since the series came back from a 10-week shutdown for the coronavirus pandemic. Elliott, Alex Bowman, William Byron and seven-time NASCAR champion Jimmie Johnson have all led laps -- a huge boost for a team that has been rebuilding for much of the past three seasons.

The rescheduled Thursday event was disrupted by lightning and rain for nearly 75 minutes after 30 laps had been completed.

NASCAR next goes to Bristol Motor Speedway in Tennessee on Sunday for a fifth Cup race in 15 days as the series attempts to reschedule eight events in a frantic stretch of racing through Southern states. 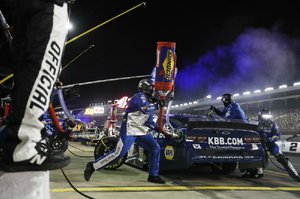