NFL's coaches could return to team facilities next week 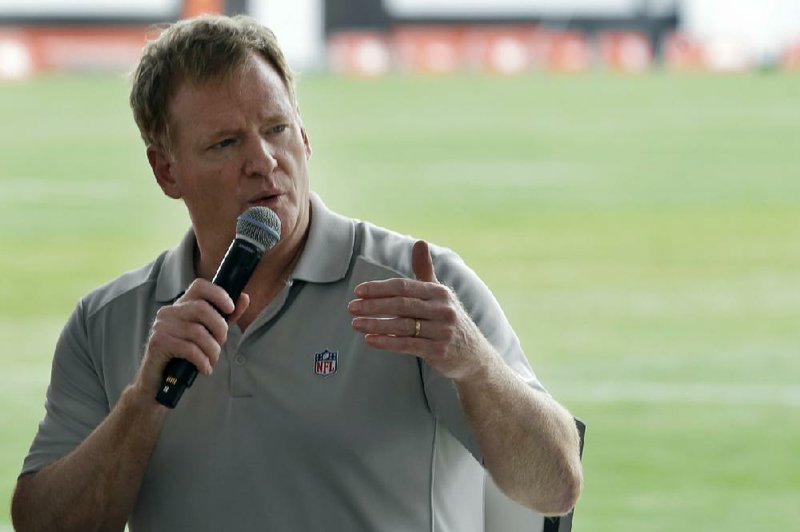 NFL Commissioner Roger Goodell said Thursday that the league expects coaches to be among the employees permitted in club facilities starting next week. (AP file photo)

NFL Commissioner Roger Goodell is hopeful that coaches will be able to return to their team facilities by next week.

Goodell said Thursday after an owners conference call that the virtual offseason is being extended for two more weeks. In a memo sent to the 32 teams and obtained by The Associated Press, he outlined the next phase of reopening of club facilities, which can begin Monday.

"We expect that next week clubs will be permitted to include members of their coaching staffs among the employees permitted to resume work in the club facility," Goodell wrote. "We are actively working with governors and other state and local authorities in those states that have not yet announced definitive plans and will confirm the precise date on which coaches can return to the facility as soon as possible."

Ticket offices, retail shops and other "customer-facing facilities" that comply with state and local regulation can open, with employees counting in the current maximum number of employees (no more than 50% of staff not to exceed 75 people) allowed.

In other business discussed on the conference call, NFL owners tabled a proposal that would have offered a fourth-and-15 play as an alternative to the onside kick. They also approved testing of the expanded use of video replay in the preseason to aid in officiating.

Atlanta Falcons President Rich McKay said there were more clubs receptive to the onside-kick alternative than in the past, and it will be further explored.

"There were lots of really good questions about the impact and nuances" such a change would involve, McKay said. "This was the longest discussion, I imagine 20 to 30 minutes on that. We ended up tabling it after taking a pulse where teams stood on it. We'll bring it back at some point."

The 32 owners also increased the number of players who may be designated for return from the injured list during a season from two to three.

Also passed was making permanent the expansion of automatic replay reviews to include scoring plays and turnovers negated by a foul, and any successful or unsuccessful extra points.

The competition committee's recommendation to expand defenseless player protection to a kickoff or punt returner who is in possession of the ball but has not had time to avoid or ward off contact of an opponent also was approved. McKay said such incidents on punt returns were rare, but "there were enough that gave us concern."

Another approved recommendation stops teams from manipulating the game clock by committing multiple dead-ball fouls while the clock is running -- an issue that came up several times in 2019, including during the postseason.

Using video replay for pass interference calls was dropped after a one-year experiment that led to more uncertainty than clarity. Many in the league cited the presence of too much subjectivity in the reviews.

Tabled was a proposal to have a booth judge serve as an eighth official on each crew and call for reviews on certain plays. The league will experiment with additional review options during the preseason as requested by the referee to the replay assistant.

"What we thought we could do in the preseason, this test allows for the ref to have communication with the replay assistant," McKay explained. "We have always allowed that communication, and now there are more areas given them to seek consultation. We always liked that idea."

The preseason is scheduled to begin Aug. 6 with the Pro Football Hall of Fame game between Pittsburgh and Dallas. It's an uncertainty -- as is the NFL's regular season -- because of the coronavirus pandemic. But the league has stated it plans to play everything as scheduled while making contingency plans that could include no fans at games and/or moving or delaying games.

Also Thursday, the NFL revamped the officiating department. Al Riveron, who has been overseeing the office, will lead the league's replay review process. Former coach Perry Fewell will handle the day-to-day operations, including outreach to the league's head coaches and general managers. Little Rock's Walt Anderson, a 24-year on-field official, becomes a senior vice president in charge of game officials, including enhanced training and performance evaluations, scouting, recruitment and development of officials.

All will report to football operations chief Troy Vincent.

"Our intentions are to implement meaningful improvements to the game and officiating," Vincent said. "We will continue to make every effort to improve officiating and pursue officiating excellence."