Leaders still to hammer out compromise with senators by Compiled by Democrat-Gazette staff from wire reports | May 29, 2020 at 7:11 a.m. 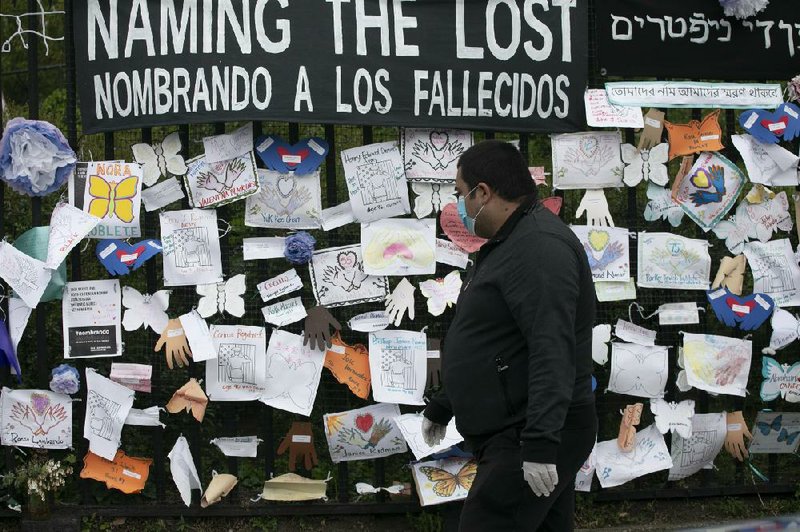 A man stops Thursday to look at tributes for covid-19 victims left on a fence outside Brooklyn’s Green-Wood Cemetery in New York. The memorial is part of the Naming the Lost project, which seeks to humanize the victims who are often listed as statistics. The wall features banners that read “Naming the Lost” in six languages — English, Spanish, Mandarin, Arabic, Hebrew and Bengali. More photos at arkansasonline.com/529covid/ (AP/Mark Lennihan)

WASHINGTON -- The House overwhelmingly passed a bill Thursday that would make it easier for small businesses to utilize funds under the Paycheck Protection Program, Congress's latest response to the coronavirus pandemic's economic fallout. Senate leaders have not yet signaled support.

The House legislation, supported by business groups that lobbied for changes to the program, would give businesses more time to have the loans forgiven and be paid off by the U.S. government.

However, the overall number of Americans currently drawing jobless benefits dropped for the first time since the crisis began, from 25 million to 21 million. And first-time applications for benefits have fallen for eight straight weeks as states gradually let stores, restaurants and other businesses reopen and the auto industry restarts factories.

The Paycheck Protection Program has emerged as one of the most visible elements of the $2 trillion Coronavirus Aid, Relief, and Economic Security or CARES Act, which passed Congress in March and was meant to blunt the economic fallout from the pandemic. As of Saturday, more than 4.4 million loans had been issued under the program, with a total valuation of more than $500 billion.

Senate Small Business and Entrepreneurship Committee Chairman Marco Rubio, R-Fla., is supporting a different bill and made clear Thursday he does not back the House approach. There are similarities between the two pieces of legislation, though, and the White House also supports making changes to the program, so a compromise could emerge.

The Paycheck Protection Program Flexibility Act passed 417 to 1 on the House's second day of a new proxy voting system developed in response to the pandemic. The lone opposition vote came from Rep. Thomas Massie, R-Ky. Proxy voting allows lawmakers to cast votes on behalf of members not present, and scores of Democrats cast their votes in that manner in favor of the small-business bill.

Republicans, who are challenging the constitutionality of the proxy voting system in court, showed up to vote in person despite some absences.

Rep. Rick Crawford, R-Ark., who was on hand Wednesday, missed Thursday's votes. He did not cast a proxy vote. Crawford has opposed proxy voting, questioning whether it is allowed under the Constitution.

"The congressman had a long-standing family obligation this week that he needed to attend, which was further complicated by a limited availability of flights," Crawford's spokeswoman said in a statement.

The lawmaker from Jonesboro left early so he could celebrate the birthdays of his wife and son, the spokeswoman said in a subsequent message.

Crawford was absent several days in the fall after fracturing his fibula while practicing for a charity football game. He missed another stretch in January due to a family member's illness.

The legislation, introduced by Reps. Dean Phillips, D-Minn., and Chip Roy, R-Texas, makes a number of changes to the $660 billion Paycheck Protection Program. The program allows companies to take out loans of up to $10 million from banks and other lenders, and the loans can be paid off by the federal government if most of the money is spent on payroll within a certain time period.

With many businesses forced to close their doors starting in March as the pandemic swept through, the PPP was overwhelmed by demand in the weeks following its creation. Congress added more money to it as scandals emerged over entities such as the Los Angeles Lakers confirming participation in the program.

The funding will be restricted to so-called community development financial organizations, known as CDFI's, which are private banks that focus on low-income, low-wealth and other neglected businesses. The SBA also sees them as a vehicle to reach minority-owned businesses.

In a statement shortly after the SBA's announcement, Senate Minority Leader Chuck Schumer, D-N.Y., applauded the decision to carve out funds, but also pressed the Treasury Department to do more. The SBA has so far held off on designating funds for Minority Depository Institutions, lenders that are specifically owned or controlled by minorities.

As the coronavirus crisis dragged on longer than originally foreseen, businesses began to complain about the requirements for having the loans forgiven, prompting lawmakers in the House and Senate to propose changes.

RULES WOULD BE RELAXED

Under the House bill, the original eight-week timeline for businesses to spend their loan money on payroll for it to be forgiven would be increased to 24 weeks. A June 30 rehiring deadline would be extended to Dec. 31. A requirement that 75% of loan money be spent on payroll would be reduced to 60%. And employers would be given more leeway on loan forgiveness if they can show they were unable to rehire people or reopen to business in a way that complies with safety standards.

The bill Rubio is pushing in the Senate extends the rehiring deadline for 16 weeks instead of 24. His office highlighted several objections to the House bill, including the provision that would make it easier for businesses to get loan forgiveness even without rehiring workers. Rubio had hoped to pass his legislation last week in the Senate, and it is unclear what the timeline might be for reaching a compromise.

The House bill attempts to strike a balance between the demands of organized labor and the business community. An earlier version of the bill had eliminated the requirement for a portion of the loan to be used on payroll, but Phillips told reporters Thursday that labor groups had objected.

"Labor was concerned that it would reduce the amount of money that would go to employees. And we also wanted to pass something that wouldn't just pass this chamber but also the Senate, and find, perhaps, a signature in the White House," Phillips said. "We felt based on conversations that this was a reasonable solution."

The House defeated a separate bill by Phillips on Thursday that would have demanded more transparency in the PPP, with the legislation failing to clear the two-thirds requirement needed for passage.

House Speaker Nancy Pelosi, D-Calif., agreed to bring Phillips' bills up for a vote as she sought his support for a sweeping $3 trillion coronavirus relief bill that passed the House earlier this month over GOP objections but is going nowhere in the Senate.

The Treasury Department and Small Business Administration have refused to disclose the names of entities that have obtained PPP loans.

Meanwhile, Senate Majority Leader Mitch McConnell on Thursday preached the importance of wearing masks in public as the nation's economy reopens from the "cataclysmic" damage inflicted by the pandemic.

During a tour of hospitals this week in his home state of Kentucky, the Republican leader has stressed wearing masks in public and following social distancing guidelines.

"There should be no stigma attached to wearing a mask," McConnell said during an appearance in Owensboro, Ky. "And even among age groups that are least likely to either contract this disease or die from it, you could be a carrier. So I think what we all need to do is say, 'OK, I'm going to take responsibility not only for myself but for others.'"

President Donald Trump has only rarely worn face coverings. McConnell did not mention the president while touting the use of masks.

Kentucky Gov. Andy Beshear has repeatedly stressed the use of masks as people increasingly venture out as the economy gradually gets rebooted.

"This is not a battle between political parties or ideologies," the Democratic governor said recently. "It's plain, basic public health guidance that's out there from the CDC and from everywhere else. It's the same guidance on the federal and on the state level. And it's just smart, right?"

On Thursday, McConnell termed the pandemic a "cataclysmic event" for the economy as businesses shuttered to try to contain the disease.

The senator listed three factors he said were key to getting back to "full normalcy" -- testing, treatment and a vaccine. He said earlier in the week that "the ultimate solution" is getting a vaccine developed and into circulation as quickly as possible. McConnell said he was upbeat about those prospects after speaking recently with pharmaceutical executives.

"We're going to get on top of this at warp speed compared to any other serious virus that the world has been afflicted with in the past," he said Thursday.

McConnell, who is seeking a seventh term this year, has toured hospitals to thank health care workers for battling the virus and to tout federal virus-relief aid sent to Kentucky. The events were his first public appearances in the Bluegrass State since mid-March due to the pandemic.

In New York, store owners who require customers to wear face coverings will now be backed up by an executive order from Gov. Andrew Cuomo.

The promised executive order authorizing businesses to deny entry to people without masks comes as outbreak-related restrictions on shops are beginning to loosen, though not yet in New York City.

Cuomo said his order will reduce conflicts between shop owners and customers who refuse to cover their faces. Face coverings are already required in New York when people are out in public and near others.

Elsewhere around the world, India saw another record daily jump in coronavirus cases.

And South Korea reported its biggest jump in infections in more than 50 days, a setback that could erase some of the hard-won gains that have made it a model for the rest of the world.

Russia reported a steady increase in its caseload, even as Moscow and provinces across the vast country moved to ease restrictions in sync with the Kremlin's political agenda. Moscow's health department said the death toll linked to covid-19 in April was more than twice initial reports once the count was broadened to include cases related to the coronavirus.

While 636 deaths were attributed directly to the pandemic, an additional 756 people in the Russian capital died of other causes while testing positive for the virus, according to a health department statement published Thursday. Using the new methodology, the death rate from the virus rose to 2.8% from 1.4%, it said.

"The resulting excess mortality in April, especially when compared with figures for other cities and countries, is not significant," according to the statement, which said Moscow fared much better than comparable cities such as New York and London.

The new figures were released after the Russian government faced questions about the much lower number of deaths attributed to the pandemic in comparison with other nations that also reported a high number of total infections. The World Health Organization has said it held discussions with Russia on how officials calculate the mortality rate, which at 1.1% is far below the global average.

Worldwide, the virus has infected more than 5.8 million people and killed about 360,000, with the U.S. having the most confirmed cases at 1.7 million and deaths topping 101,000, according to the tally by Johns Hopkins University. Europe has recorded about 170,000 deaths.

Information for this article was contributed by Erica Werner and Aaron Gregg of The Washington Post; by Christopher Rugaber, Dan Sewell, Bruce Schreiner, Karen Matthews and Michael Hill of The Associated Press; by Jake Rudnitsky of Bloomberg News; and by Frank E. Lockwood of the Arkansas Democrat-Gazette.