The Lovebirds: Just enough to keep you watching 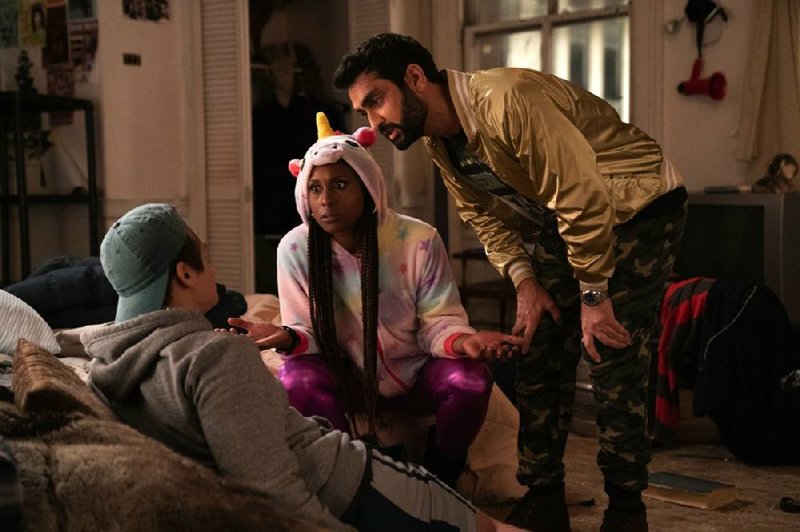 Issa Rae and Kumail Nanjiani play a couple who experience a very eventful first date in The Lovebirds, currently the No. 1 movie streaming on Netflix.

Fayetteville's drive-in theater is scheduled to open tonight. Maybe studios will release new movies again for these theaters, and more will start popping up. But until then ... I guess I have new streaming movies to keep me occupied. And a week ago, The Lovebirds dropped on Netflix.

From my understanding, it seems like The Lovebirds was going to hit movie theaters before the covid-19 pandemic struck and shut just about every one of them down. So it debuted on Netflix. Had we been in normal times, I would have been unlikely to see this movie in theaters, even with AMC's Stubbs A-List.

I didn't see this movie advertised anywhere. And even if I did, it's a romantic comedy. I'm not really a rom-com kind of gal. Bring on the fantasy and science fiction. Hell, even a Western, and I'm happy.

But I was on Twitter last week when this sports clerk for The News Tribune in Tacoma, Wash., tweeted me about The Lovebirds. His name is Chase Hutchinson, and he also reviews movies. We follow each other and sometimes tweet each other about our movie opinions. He mentioned that he liked this movie. So I decided to give it a try.

The premise of the film sounds worse than it is. The Lovebirds is billed as a movie where a normal couple just tries to go on a date and wacky shenanigans ensue! And by wacky, I mean a movie where actors scream their lines because louder is funnier, and the audience will laugh at anybody who screams, right?

Thank God that isn't what the movie actually turned out to be. The story follows a couple, Jibran and Leilani. Jibran is played by Kumail Nanjiani, whom I remembered from Stuber, a movie I surprisingly enjoyed. Leilani is played by Issa Rae, who I admit, I'd never seen before this film.

In The Lovebirds, their relationship is on the fritz, and during a fight on the way to a dinner party, a man jacks their car (with them inside) and proceeds to kill a bicyclist with it. He then takes off, leaving them to take the blame.

I was confused watching the opening bit of the movie that supposedly showed these two characters awkwardly falling in love. It seemed to take the actors a few minutes to get some chemistry with each other, ironically, about the time their bickering started.

Nanjiani and Rae are both fine actors in this movie. They're legitimately funny, and once they settle into their respective roles, they aren't half bad together. I didn't think I was going to get that invested in their relationship, but about the time this couple actually makes it to the dinner party, I began to see value in what they had started the movie throwing away. There was a noticeable level of sentimentality between the two. It was enough to make my wife root for them to stop fighting and get their relationship repaired.

This movie's greatest strength is its humor. Because if a comedy isn't funny, then what's the point of watching it? When The Lovebirds nails a joke, it freaking NAILS it. And the deadpan humor (mostly from Rae) had me laughing so hard, my neighbors are probably about to start pounding on the wall.

When the jokes are good, I bust my gut. At one point in the movie, the couple is sitting in an auditorium with a cult, chanting about the "Hermetic Order of the Golden Dawn," and our protagonists don't know the words to the chant. So Rae says, "Leggo my Eggo" at the same time Nanjiani says "Where's the beef?" I had to pause the movie because I was laughing so hard.

You're probably thinking, "So why did you write, when the jokes are good?" That implies that some jokes are bad, right? And yeah, kind of.

That's the film's greatest weakness. It's the idle chit-chat. These characters are just very chatty. Very chatty. And it gets annoying. Toward the end, the villain of the movie even calls them an annoying couple. And you know what? I agreed with him.

Nanjiani and Rae talk so much through the movie. There are scenes that are too long because they talk too much. The talking doesn't really move the story forward, and it's not funny. So I'm just watching this couple say words, sometimes nervously and out of sequence. Their fight toward the beginning of the movie is way too long. Then, right after the bicyclist is killed, they chatter to the witnesses. And it seems to last forever.

During these chattering scenes, I was checking my phone, waiting for the actual movie to start again. It felt like padding so the movie reached an acceptable running time. Aside from the padding, the running time for The Lovebirds is nice. It doesn't even hit 90 minutes, which is perfect, because The Lovebirds easily had the capacity to overstay its welcome. I saw that in the chattering scenes.

But every time I would feel tempted to turn the movie off and watch another episode of Friends, it was like Rae and Najiani sensed my demeanor, and they'd nail another hilarious joke. There's a scene where they're interrogating what they call a "frat boy," and Rae says something like, "That's enough out of you, Brett Kavanaugh," and it just came out of nowhere. I laughed so hard

This movie offered just enough laughs and insanity to keep me from turning it off. And the story really goes all over the place, from blackmailing a congressman and infiltrating a sex cult to a big mix-up at the end. I'll give the narrative credit for keeping me interested.

But there are some obvious downsides with the chattering scenes. Then there's the dinner party with friends, which I don't know how the writers intended for it to come across, but it was just awkward for me.

I don't intend to watch this movie again. Like Stuber, it's something I sat through once. I laughed harder than I thought I would, and I'm satisfied with that. There were repeated gags that kept popping up throughout the movie. I love it when writers can consistently work in a funny gag a few times and have it lead to a payoff.

Initially, I suspected if this movie had been released in theaters, it wouldn't have made its money back, just from being a sort of low-key rom-com. But then I saw the budget was only $16 million, and it definitely would have made that back.

The Lovebirds sits in a genre of movies typically found to be filled with cliches -- and lazily written. It had the potential to be terrible. Consider me relieved it wasn't.

Print Headline: The Lovebirds: Just enough to keep you watching