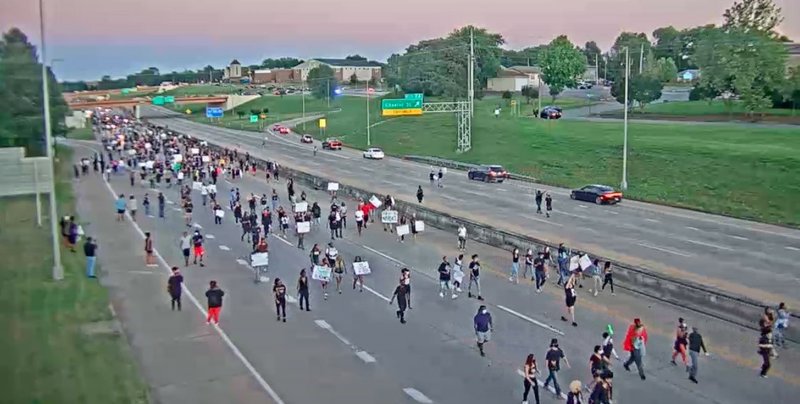 Demonstrators walk on Interstate 630 in Little Rock on Saturday, May 30, 2020, in this Arkansas Department of Transportation photo.

State police used tear gas Saturday night to prevent protesters from closing down Interstate 630 in Little Rock for a second time that day.

A crowd estimated at 400-500 people protested outside the state Capitol about 9:45 p.m., and began to move toward I-630. State police fired tear gas to prevent them from reaching the interstate, according to police spokesman Eric Barnes.

Officers were blocking traffic leading to the Capitol about 9:45 p.m., but that had abated by 10:30 p.m.

The interstate was closed from about 6:30 p.m. and reopened shortly after 8:30 p.m., Barnes said.

[Video not showing up above? Click here to watch » https://www.youtube.com/watch?v=p7z-u_a8qo0]

Arkansas Department of Transportation official Randy Ort said protesters blocked the westbound lanes of I-630 between Broadway and Chester Street. He did not have additional or more specific information.

Protests late Saturday were mostly peaceful, although some participants yelled and threw bottles at a local television camera crew, prompting the crew to leave.

One Little Rock Police Department officer was hit with rocks while attempting to protect property near Martin Luther King Jr. Drive and I-630, but is in OK condition, Barnes said.

More damage and another injury is being reported and investigated, Barnes said.

The portions of the interstate that were blocked were reopened shortly after 8:30 p.m., Banes said.

A protest followed at the state Capitol later Saturday night. A report from the scene indicated that police were restricting traffic as far east as South Chester Street, about five blocks from the Capitol.

The protests on I-630 and at the Capitol were among many across the country Saturday after the death of George Floyd, a handcuffed black man who died after a Minneapolis police officer pressed his knee into his neck for several minutes.