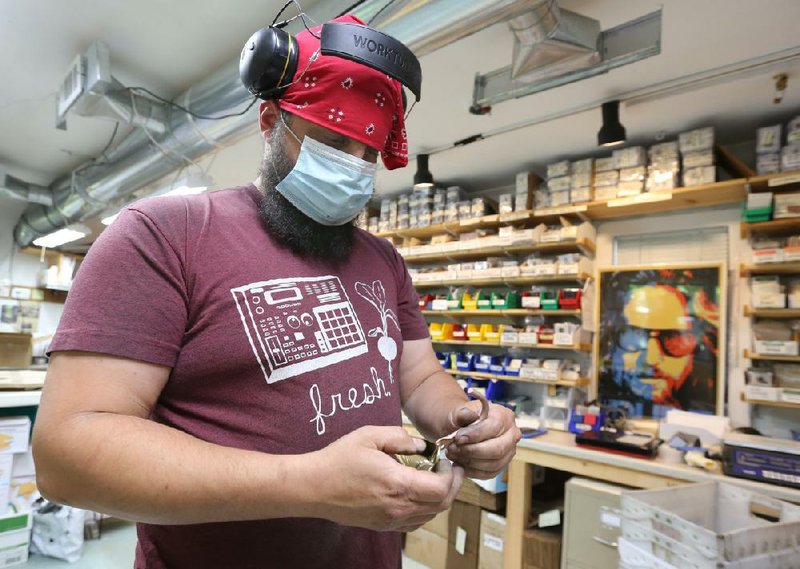 Woody Maringer with Shire Post Mint attaches a copper door-opener to his key chain that will allow him to open doors and apply pressure to objects without touching them. Check out nwaonline.com/200531Daily/ and nwadg.com/photos for a photo gallery. (NWA Democrat-Gazette/David Gottschalk)

A Springdale company known for making metal coins tied to famous fantasy franchises has made a slight pivot in the face of the coronavirus outbreak by now producing copper door-openers that can be clipped to a key chain.

Shire Post Mint is offering the small, hooklike devices through its online store and Etsy for $5. The devices are touted as antimicrobial. They don’t work on rounded doorknobs.

The little tools are selling well, according to Shire Post Mint’s owners, the Maringer family, while the company’s main business in unique collectible coins is still chugging along. The Maringers noted that the mint doesn’t require any components or raw materials from China to maintain production so it hasn’t been hit hard by the pandemic like other U.S. small businesses.

According to a survey by the National Federation of Independent Business taken in late March, 92% of small employers said they were negatively affected by the coronavirus outbreak and almost all small employers are now affected by economic disruptions related to the pandemic. The National Federation of Independent Business is a nonprofit group advocating for America’s small and independent business owners, according to its website.

Of the small employers hurt by the outbreak, 80% report slower sales, 31% said they are experiencing supply-chain disruptions, and 23% report concerns over sick employees.

In 2003, Shire Post Mint’s founder, Tom Maringer, reached a deal with George R.R. Martin for the licensing of coins based on Martin’s Game of Thrones books that later went on to become a hit series on HBO. Back in the day, Martin used the coins at personal appearances, handing them out to early loyalists. Shire Post Mint has been making coins full time since 2010 and today makes more than 150 different coins, sold individually or in sets, and produces about 100,000 coins annually.

In addition to the Game of Thrones coins, Shire Post Mint makes coins under license from several other fantasy franchises, including, Robert E. Howard’s Conan the Barbarian, Patrick Rothfuss’ The King Killer Chronicles, and J.R.R. Tolkien’s The Lord of the Rings.

Woody Maringer, the mint’s operations manager, said he was experimenting with copper scrap when he came up with the idea to make the simple, door-opening device. He said there are thousands of versions of similar tools on the market and noted lots of manufacturers have been offering them since the pandemic began. He likened them to fidget-spinners, once a really niche product that many companies began to produce when people began to show an interest in the device.

He said he made a few of the door-openers and then the company put them up for sale online.

Helen Maringer, Shire Post’s chief executive officer and Woody’s sister, said that while the company’s business has been steady, sales have not been as strong as in past years. She said the wild card regarding sales this year will be if retailers feel comfortable enough to buy the mint’s products for the coming holiday season.

In the meantime Shire Post has ordered more stock — primarily 12-foot copper rods — and has been producing the door-openers at a rapid pace, Woody Maringer said. He said orders have been small and large — including a California city that purchased the openers for their first responders, public-works folks and other employees.

“We’ve been selling them like crazy,” Woody Maringer said. 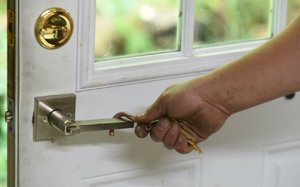 Woody Maringer demonstrates the use of the Shire Post Mint’s door-opener. The mint is known for its collectible coins linked to popular sci-fi and fantasy franchises. Check out nwaonline.com/200531Daily/ and nwadg.com/photos for a photo gallery. (NWA Democrat-Gazette/David Gottschalk)