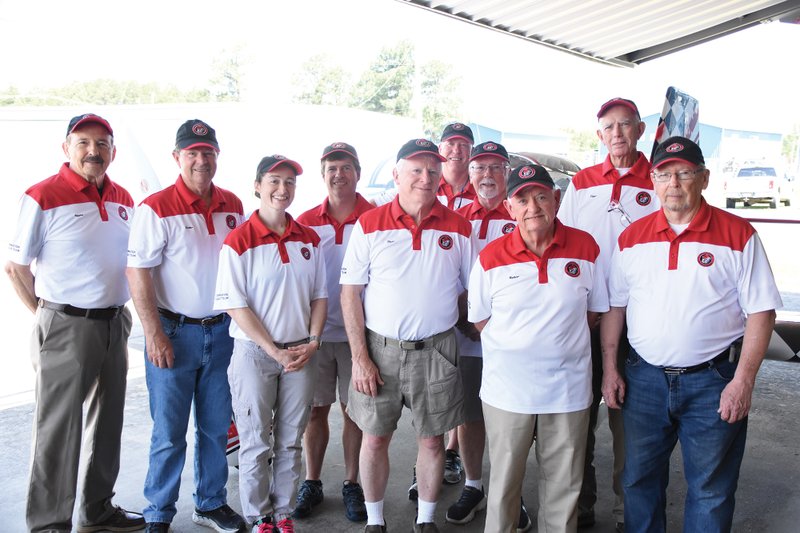 Flying in a stacked position with just mere feet between them, 12 pilots, members of the Bulldog Flight Formation team, swooped over central Arkansas, leaving a trail of smoke behind them.

The team, in an effort to recognize the area’s front-line and essential workers, such as nurses, doctors and first-responders, had organized the flight earlier this month to decorate the sky with hearts.

The Bulldog Flight Formation team consists of pilots from Arkansas, Louisiana and Mississippi, and they participate in air shows from around the state. Bill Schlatterer, a pilot from Maumelle, said with everything closed down, there is no better social distancing than putting a symbol in the sky.

“People actually knew we were going to do it, and they got a lot of great pictures and got the message,” Schlatterer said. “We aren’t good enough to write thank-you notes, and it just worked out that it was National Nurses Day, and we had a nice blue background.”

Jerry Homsley, who lives in Cabot and has been a part of the flight team for about five years, said it was his idea, along with his brother, Marvin, to create the hearts.

“He and I used to do some sky writing, and we got to talking about [drawing the hearts], but it was something we had never done before,” Homsley said. “So we laid it out on paper first, because there are a number of things you have to consider, more than just what a heart looks like.”

He said they spent some time practicing making the hearts over the south end of Lake Conway. He said one of the things they had to learn was making a heart’s sharp point by increasing the bank angle to have a nice crisp point.

“We had no idea the thing would go viral like it did on social media — it just blew up, even before we landed,” Homsley said. “We were glad to do it, to be able to recognize the medical workers and first responders, which is what this thing is all about.

“We wanted to recognize those workers and thought a heart would be neat. We could have gone up and drawn a smiley face, but I don’t think it would have had the same meaning as a 3-mile-wide heart in the sky.”

The flight team drew the first heart in the sky above Little Rock about 3:20 p.m. May 6 and a second heart over Maumelle around 3:30 p.m.

The third heart was etched into the sky above North Little Rock around 3:30 p.m.

Homsley said they had a team of four around one side and another group on the opposite side, arranging in a diamond formation. He said by having a larger formation, it allowed the smoke to be a little bigger.

To make the smoke in the sky, the team uses smoke oil, which is 100 percent mineral oil that is clear and almost looks like water. Each plane carries about 3 to 4 gallons of the mineral oil.

Gerald Lloyd, who was a helicopter pilot in Vietnam, is the leader of the formation team. He helped the group get together and learn how to fly in a formation safely, as well as look for reasons to fly. Schlatterer said formation flying is not for everybody, but there is a formal training program.

“We have never had a chance to give back like this,” Schlatterer said, “so we went out and practiced drawing hearts. Several of our guys are ex-military, and several are guys like me who like to fly.

“We were looking for an opportunity to do something different.”

“I have always been fascinated with flying,” Schlatterer said. “I had a friend who was a flight instructor, and I had the opportunity to learn.

“It is a lot of fun. I have the type of personality where you want to be in control, and you have a lot of freedom in flying that you don’t have on the ground. To couple that with your buddies and put it in a team environment, it is pretty awesome.”

Schlatterer’s dad, Bill, was a radio navigator in World War II, flying a B17 and a Consolidated PBY Catalina. He said seeing his dad always come back in one piece was inspiring. Schlatterer has been flying since he was 18 years old, off and on. He built his airplane in 2000, which is a certified homebuilt aircraft. He said the kits are built by the individuals, much like custom-built racing cars.

“We have been flying together since about 2013 or 2014, and the group does various air shows around the state,” Schlatterer said. “We are just flying for fun, which is what we do anyways.”