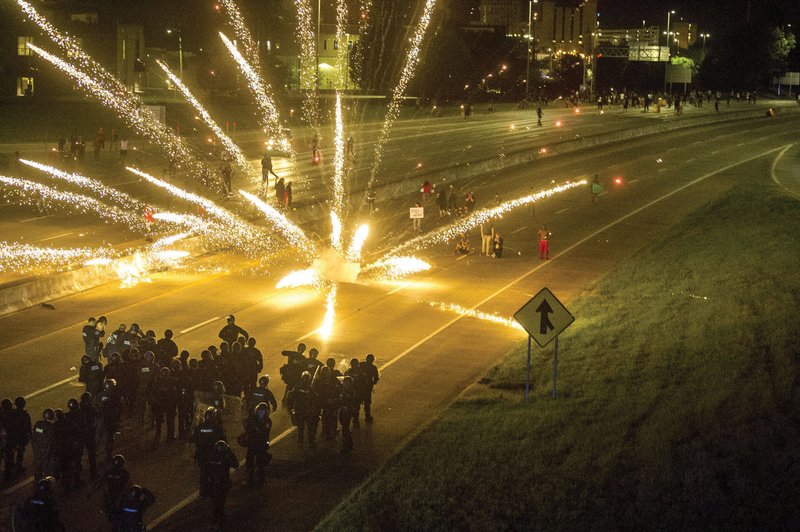 Protesters throw fireworks at police officers Saturday evening as they block Interstate 630 during a protest in downtown Little Rock over the killing of George Floyd in Minneapolis. More photos at arkansasonline.com/531lr/. (Arkansas Democrat-Gazette/Stephen Swofford)

Protests took a violent turn Saturday in Little Rock, with windows smashed in some buildings across from the state Capitol, and the Arkansas State Police firing tear gas to dislodge protesters who had shut down Interstate 630 for the second time during the day.

Some car windows were reported smashed in the area of Martin Luther King Jr. Drive and I-630, and at least one police officer was hit with rocks as he attempted to protect property in that area, according to police spokesman Eric Barnes. Barnes said the officer is OK.

[Video not showing up above? Click here to watch » https://www.youtube.com/watch?v=p7z-u_a8qo0]

Police were investigating additional reports of damage and at least one other injury, he said.

Gov. Asa Hutchinson said in a tweet late Saturday that he had directed the state police to work with local authorities to protect the Capitol. The Capitol apparently was not damaged.

Little Rock Mayor Frank Scott Jr. said in a statement about 10:30 p.m. to protesters that their message had been heard, and it was time for them to go home.

State police in riot gear warned protesters near the southeast corner of the Capitol complex to leave.

By about 11 p.m., the crowd had dissipated from 400-500 people to about 50, although clashes continued sporadically with protesters shooting fireworks at police and state police officers firing back with tear gas.

One protester was seen breaking windows on the ground floor of the building opposite the Capitol that houses the Arkansas State University System offices.

About 9 p.m., some protesters yelled at and threw plastic bottles of liquid at a local television camera crew, prompting the crew to leave. The incident damaged a camera, Barnes said.

About 9:45 p.m., the crowd started to move from the Capitol toward I-630. Protesters shot off fireworks low to the ground as they moved south. Authorities fired tear gas to prevent the protesters from reaching the freeway, but were unsuccessful.

The freeway was blocked only briefly.

Also about that time, officers were blocking traffic on streets leading to the Capitol.

Earlier, about dusk, protesters had temporarily closed parts of I-630 for about two hours, snarling traffic, Barnes said.

The interstate was reopened shortly after 8:30 p.m., Barnes said.

Arkansas Department of Transportation official Randy Ort said the protesters had blocked the westbound lanes of I-630 between Broadway and Chester Street. He did not have additional or more specific information.

In his tweet late Saturday, Hutchinson said: "so many respectful protests today for the right reason; but destruction of property is not acceptable. I have directed the State Police to work with local law enforcement to stop the damage to the Capitol. The National Guard will be available as well."

Scott's statement read: "Little Rock, we've experienced a peaceful day of protesting, productively expressing pain. We understand the agony. We are listening to the voices. We'll continue to work together to solve systemic problems. Let's continue to remain peaceful. Now, I'm asking everyone to go home."

By 11:15 p.m., demonstrators were moving away from the Capitol grounds and getting into their cars to leave. 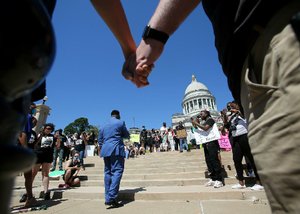 Protesters hold hands for a prayer Saturday during a demonstration outside the state Capitol in Little Rock. The group was protesting the death of George Floyd, who was killed in police custody in Minneapolis on Monday. More photos at arkansasonline.com/531protest/. (Arkansas Democrat-Gazette/Thomas Metthe)