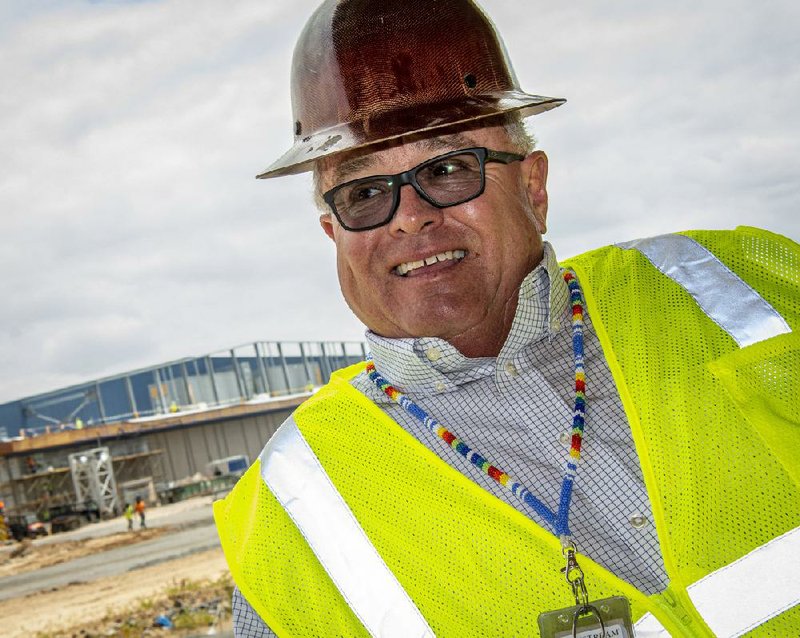 “We have a lot of history there in Arkansas. [The Quapaw] consider it our homeland. The name of the casino comes from our chief buried in the cemetery in Pine Bluff.” (Arkansas Democrat-Gazette/Cary Jenkins)

• 2,300 slot machines including 300 machines at the Saracen Annex Q Store

The Saracen Annex Q Store and its slot machines opened up to the public in September. By the end of the month, the popularity of the new gambling site couldn't be denied. The Saracen Annex was reporting revenues north of a million dollars.

For John Berrey, the Saracen Casino represents another significant achievement for the Quapaw Nation. Berrey is the chairman of the Quapaw Business Council, the governing body for the American Indian tribe.

"We have a lot of history there in Arkansas," Berrey says. "[The Quapaw] consider it our homeland. The name of the casino comes from our chief buried in the cemetery in Pine Bluff."

During the 19 years he has been on the Quapaw Business Council, Berrey has overseen the construction and operation of two gambling facilities in Oklahoma -- the Quapaw Casino in Miami and the Downstream Casino Resort in Quapaw.

"It is going to be a beautiful jewel," says Berrey of the yet-to-be-realized Pine Bluff casino, which with the setback from the coronavirus is aiming for a completion date in September. "It will be a beautiful building. It will bring people to Jefferson County."

A casino and resort the size of the Saracen is a massive undertaking in its own right but having to negotiate the obstacles that come with establishing a new gambling facility in Arkansas is something else altogether. Arkansas voters had to approve first, which they did through the passage of Issue 4 during the November 2018 election. The Quapaw Tribe and Berrey worked to promote the approval of Issue 4.

Berrey has held his post as leader of the Quapaw for a record 19 years. His skills and effort haven't gone unnoticed.

"John is one of the most remarkable people I have ever known because of the breadth and depth of his interests and abilities," says U.S. Circuit Judge Morris S. Arnold. Arnold became acquainted with Berrey in his research on the Quapaw tribe for his books on Arkansas history. "[Berrey] is a tireless worker on behalf of his nation, telling its history and directing its enterprises with the same extraordinary energy and vision. It's inspiring to see him at work."

The Pine Bluff casino could only come about after, as Berrey says, "we started spending time with the community about what we could do there."

Berrey is pretty blunt about what the advantages are to an operation as large as the Saracen.

"John has all his fingers on the buttons. He just knows how to get things done," Arnold says. "He has the welfare of his people very much in the forefront of his plans."

Early life for Berrey had a definite female flavor. Berrey was the lone male child in household of six children. He has three older and two younger sisters.

"To me it was normal," Berrey says of living with so many girls. "Everybody should know the real world is run by women, so I got a good education. I am close to my five sisters to this day."

Berrey notes that his family moved a lot when he was young. He was born in Colorado, moved to Missouri in grade school and by the 10th grade was in school in Fountain Valley, Calif.

The moving he attributed to the work of his father, who served in Korea "taking pictures out of planes of troop movements."

"My father is Native American," Berrey notes. "He's half Quapaw and half Osage."

Another strong woman in his family is given credit by Berrey for his understanding and appreciation of his distinct ancestry.

"I was around my grandmother a lot," Berrey notes. "She instilled in me my tribal culture. We went to social events and ceremonies of our tribe. Indians are very respectful to elders. I spent a lot of time with Grandma. She was always teaching us stuff. She was a tough lady. Smart woman and pretty cunning."

A most significant event for Berrey happened when he was 8 years old.

"My sisters and I were given our first names at a ceremony," Berrey says. "Maude Supernaw, the official name-giver, gave us our Quapaw names."

"These are traditional names that are specific to your clan and your ancestors. There is a ceremony and a meal as part of it. We believe our folks will know you by that name in the afterlife."

Berrey remembers a steady string of big gatherings where he would play with kids from Indian families. Even if those children weren't strict blood relations, Berrey notes that he was expected to "treat them exactly the same way."

Berrey also remembers the sting of prejudice that was an unfortunate part of his life.

"My father had a very dark complexion. When I was young, a restaurant we went to would not serve us. We had to leave, and my dad made quite a commotion. It was in Denver when I was very young. This kind of thing happened several times."

A connection to the outdoors was forged by Berrey almost immediately. He was a Boy Scout, and his family camped out regularly. His love for trout fishing has remained a constant in his life. Berrey is also experienced as a cattle rancher.

"My family has always had a cattle farm outside of Tulsa," Berrey says. "We would spend a lot of time there when I was young."

Even though he is now well past his teenage years, Berrey will occasionally work as a cowboy on the cattle farm. He talks about an incident he had wrangling cattle last year.

"You have to bring all your cattle running through a squeeze shoot so you can you inoculate them, brand them and draw blood. When you have a couple thousand head of cattle, this means that you are working dawn to dark. It's never smooth as you might want it to be. Last year, a 2,500 pound bison laid down in the shoot. We couldn't get him to get up. I and another guy had to climb in there to tickle him to get him up. You have to get out of there instantly after he decides to get up. If you don't, it's not good. They're an amazing animal."

Berrey admits he wasn't the greatest high school student, though "sometimes I was on the honor roll." He had an interest in history and science and found himself occupied by those classes. School, however, had to take a backseat to work, which Berrey says he did "as soon as I could push a lawnmower."

After high school, Berrey headed off to college at the University of Arkansas. The Fayetteville campus and surrounding mountains and woods weren't the same as beach life in California.

"It was a huge cultural shock from where I was in high school," Berrey says. "I did enjoy floating the Buffalo River, and I fished a lot for trout."

Berrey's path to earning a degree in journalism in 1991 wasn't a smooth one.

"I had to pay for my school," Berrey says. "I would sometimes run out of money and had to leave and work. It was usually financial reasons that kept me away. Eventually, I would get back in school and did well."

After college, Berrey worked in construction, which eventually led to him flipping houses.

"My dad got cancer," Berrey says. "My dad was super sick, and I wanted to be around to help care for him. This led me to continue to flip houses and work on the cattle ranch."

Little did Berrey know that the major occupation for the next 19 years of his life was just around the corner.

"Witsimi Ardina is my greatest supporter," Berrey says. "She grew up very close to her cousin, my dad. I always called her my aunt. She asked me to come and visit her. At the time, the Quapaws were going through turmoil with a lot of infighting. She asked me to run for the business committee for our tribal council. I didn't even know what that meant."

"Although I was very interested in our cultural ways of the tribe, I had never considered myself a good candidate for the business committee. But in our culture when an elder -- and more especially a relative and elder -- asks you to do something, you really don't have a choice to refuse."

Berrey was elected to the council and eventually ran for and was elected chairman. In the late 1990s, when he joined the council, Berrey says his tribe had several concerns that needed addressing.

"We were a small tribe and we didn't have much money. We had, I think, 29 employees. We had a little bingo hall that was corrupt. We had gone for years without a clean audit."

In 2018, Berrey's work was recognized, and he was given the Tribal Leader of the Year award by the Native American Finance Officers Association. Numerous projects engaged in during Berrey's tenure have raised the financial profile of the Quapaw. Berrey estimates the number of people employed by the Quapaw Tribe before the covid-19 virus crisis hit to be approximately 1,900.

At the ceremony to break ground for the building of the Saracen casino, Berrey's friend Barry Switzer, former NFL coach, had this to say.

"We are both University of Arkansas graduates," Switzer said. "I finished way ahead of him, but he is an Arkansas graduate, and he takes great pride in the state of Arkansas. When he built Downstream Casino, he asked me to be a part of it, and I have remained a part of it as a spokesman. I have spent a lot of time with John. He is a great man, and he wants nothing but the best for Jefferson County and [the] Quapaw Nation." 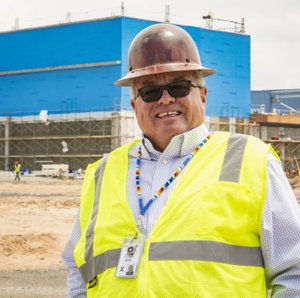 “We have gathered up tons of food to give away to our tribal members. We are paying health benefits for our furloughed employees. It taught us a lot of things. We have cleaned everything so well. We are starting to crank things back up. We are waiting for the green light.” (Arkansas Democrat-Gazette/Cary Jenkins)

As for the present, the opening of the full Saracen Casino and Resort is still on hold. Berrey does see the light shining at the end of the tunnel.

"It's very scary for a lot people," says Berrey of challenges that the covid-19 crisis has presented. "We have gathered up tons of food to give away to our tribal members. We are paying health benefits for our furloughed employees. It taught us a lot of things. ... We are starting to crank things back up. We are waiting for the green light."

SOMETHING I WAS TAUGHT EARLY ON THAT’S REMAINED WITH ME TO THIS DAY: Respect and treat woman properly, I have five sisters, a strong mom and very strong grandmothers. Our [Quapaw] tribe is matriarchal.

NOBODY KNOWS THAT I LIKE TO: Being a dad! And fishing. I’m pretty simple.

ADVICE I WOULD GIVE MY YOUNGER SELF IF I COULD: Don’t destroy your body in sports, construction and being stupid.

A GREAT MEAL MUST INCLUDE: A ribeye

THE SINGLE THING I WANT EVERYONE TO KNOW ABOUT THE QUAPAW TRIBE: We are strong, compassionate and hardy.

ONE WORD THAT SUMS ME UP: Driven