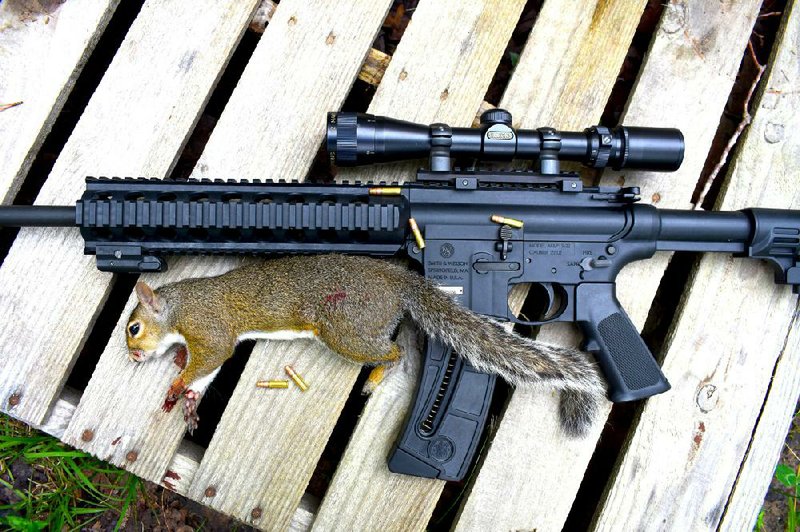 Even the young ones sense menace in an upturned face.

Squirrels that chattered and barked minutes ago turn silent as eyes on the ground peer skyward. Twitching tails that flagged a squirrel's location lie still as its owner hugs a limb so tightly to be virtually indistinguishable from the wood.

Almost indistinguishable, but not quite. I traced a squirrel's barking to this tall white oak, but it wasn't easy. Squirrels are master ventriloquists. A single squirrel can sound like it's directly above you, but seconds later you'd swear it was three or four trees over there. Or over there.

It's a game of triangulation. If you listen closely, you'll eventually pinpoint the exact tree, and then the stalk begins. From where I stand, a lot of leaves and limbs were between us, preventing a clear shot. With a shotgun, a full choke and 11/8 ounce of No. 6 lead, I could blast through the obstructions and bring him down.

What I'm doing is surgical. I am using a short-barreled .22-caliber rifle loaded with 40-grain hollow points stuffed into tiny long rifle cases. Any obstruction, be it a twig or a leaf, will deflect the bullet and result in a miss. I must get closer, and squirrels intuit that a form creeping along the forest floor is dangerous.

Once I pinpoint his tree, I watch several minutes for movement. A twitching tail is a golden giveaway. A lead brick is a squirrel scampering to the end of a branch, jumping to another branch and then to another until he's safe and out of sight.

Minus movement, I also look for the triangular form of a squirrel sitting upright on a branch or a dark form at the union of two trunks or at the forks of large limbs. I see none of these, so I circle the tree at a rate of two steps every five minutes. The view changes with each step.

Having made a half circle around the tree, I see leaves parting high in the crown as a squirrel climbs higher to put distance between us. Then, all is still again.

I didn't see the squirrel, only his wake. I look above the last stirring to see if he is creeping higher. The natural tendency is to focus on where you last saw movement, but that's a mistake. You have to look to where he is going, not to where he was.

There is no more movement. The squirrel is in the tree close, flat on a branch watching, waiting. He'll try to wait you out, but squirrels are also very nervous and flighty. You have only so much time before he loses his nerve and bolts. With a shotgun, you can get a squirrel on the run. With a rifle, that's unlikely.

Wearing polarized sunglasses, my eyes scan every branch from trunk to end. One branch at a time I look higher and higher. Finally I see it, an almost imperceptible lump atop a branch among a bristle of leafy twigs. Cranking my scope up to 9x, I zoom in. It takes me nearly 15 minutes, but I find him. He is hidden well, but there's a small opening that a 40-grain hollow point can thread.

Steadying the rifle, I center the crosshairs, exhale half my air and squeeze. The little rifle cracks, and my prey tumbles.

Squirrel season opened May 15 in Arkansas, and with the cool weather, the early part of the season is as pleasant as hunting in the fall. In some aspects it is also easier, mostly because the damp ground muffles a hunter's footfalls. You can creep more stealthily in the spring than in the crackly, crunchy forest duff of fall.

When I was younger and my only goal was the kill, I used a shotgun. I grew to disdain the noise and weight of a shotgun. My rifle is lithe and light, and it doesn't pepper the meat with pellets. Instead of the thunderous booms that send squirrels into hiding, the .22 makes a sharp crack. It stills squirrels for a while, but their alarm duration is much shorter.

Springtime woods are rife with ticks and chiggers. Mosquitoes swarm in the mornings and evenings. I spray my boots, cuffs, shirt collar and trouser pipes liberally with high-potency repellent. For my skin, I use OFF! Botanicals. Even so, I have pulled off more ticks since May 15 than I have in many years. It makes me hate them all the more.

The season is young but fruitful. I've shot 17 gray squirrels, including the glorious opening morning when I downed three from one tree with four shots in about 10 seconds. My shot-to-kill ratio was almost 1:1 until two days ago, when I went on a six-round missing spree. 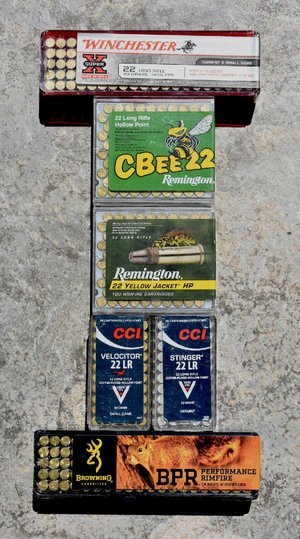 When the squirrels are especially wary, you get impatient and make mistakes. It happens to the best of us, but squirrels make much better hunters of us all.