U.S. pushes to get borderland 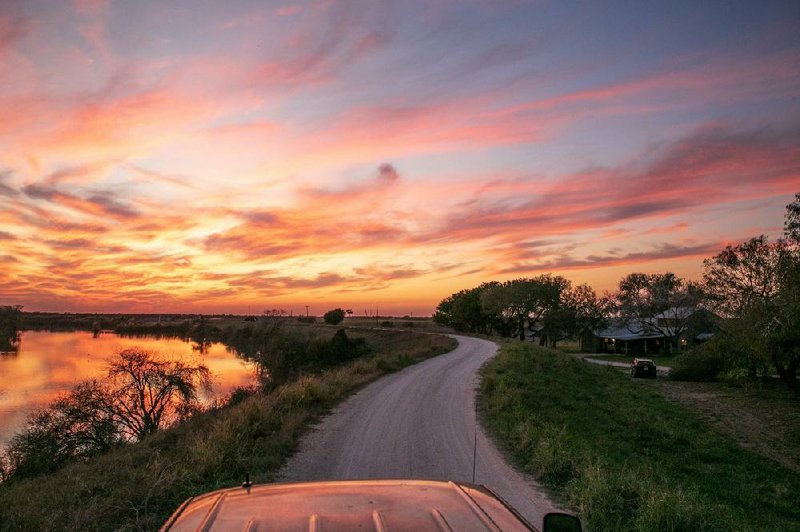 The Trump administration is accelerating efforts to seize private property for a border wall, taking advantage of the coronavirus pandemic to survey land while its owners are confined indoors, residents along the Rio Grande say. (The New York Times/Ilana Panich-Linsman)

WASHINGTON -- The federal government is accelerating efforts to seize private property for President Donald Trump's border wall, taking advantage of the coronavirus pandemic to survey land while its owners are confined indoors, residents along the Rio Grande say.

"Is that essential business?" asked Nayda Alvarez, 49, who recently found construction markers on the land in Starr County, Texas, that has been in her family for five generations. "That didn't stop a single minute during the shelter in place or stay at home."

The federal government filed a flurry of lawsuits against landowners in southern Texas to survey, seize and potentially begin construction on private property in the first five months of the year as the administration rushed to deliver on Trump's promise to build 450 miles of wall by the end of the year, which he downgraded Thursday to 400. While Trump has built less than 200 of those miles, his administration has filed 78 lawsuits against landowners on the border, 30 of them this year.

Negotiations and lawsuits are proving to be arduous. The administration has acquired just 10 of the 213 miles of private property that the border wall is projected to pass through in the Laredo and Rio Grande Valley sectors, according to Customs and Border Protection data from May 19 obtained by The New York Times, an increase of 7 miles since December. In recent months, the president's son-in-law, Jared Kushner, has stepped in to oversee the effort.

The increased litigation against the landowners, despite the pandemic, is evidence of the administration's sense of urgency to deliver on a symbol of Trump's crackdown on immigration. The president has said the pandemic is proof of the wall's necessity, though there is no real evidence it will have any effect on public health.

"Mexico is having a very, very hard time, as you know, with COVID, especially along the border," Trump told reporters Thursday, though Mexico's 8,600 deaths and 78,000 infections are a fraction of the toll in the United States. "Fortunately," he added, "we have a brand-new wall along there, and the wall is saving us."

The government filed 13 lawsuits in March alone to access and acquire land, the highest single-month total since Trump took office, according to the Texas Civil Rights Project.

Some of the landowners who were sued have kept the properties in their families for generations. But the Texans say the government's timing has left them further disadvantaged in a process in which the administration already has the law on its side. Landowners adhering to coronavirus guidelines have been unable to meet with their relatives to discuss the government's offers, to confer with lawyers on how to fight the government or to consult appraisers on the accurate value of their land. Some have questioned why the push to access their properties is coming as the coronavirus spreads, and they try to avoid social contact.

"They want to do it all obviously prior to November" and the election, said Steven Kobernat, 61, a landowner in Starr County who said he felt hounded by the Department of Justice. "But here we are in a pandemic. We can't meet, we can't meet with our families. And then [Justice Department] says it's time-sensitive in a time of pandemic. It's just absurd."

The Justice Department said in a statement, "We are following all local, state and federal COVID protocols for all phases of land acquisition and court work."

Raini Brunson, a spokeswoman for the Army Corps of Engineers, which is leading construction, said the agency was committed to the safety of employees, contractors and "the people in communities in which we work." The agency "continues to execute its border barrier infrastructure mission in order to safeguard national security capabilities," she added.

Alvarez had just gone back to Starr County in March when she noticed something strange on her property: construction markers jammed into the earth to measure elevation. Crews had entered her land while she was in Washington to testify to Congress against the border wall.

Months before, Alvarez had encountered government contractors on her property who claimed they had received permission from a relative to survey the land. She refused them access, but her family has continued to see construction crews driving around their land.

Kobernat feels similar pressure. When the Army Corps of Engineers pressed him to accept an offer for 7 acres of his family's farm, he pleaded for time to allow the pandemic to ebb.

"There is a sudden mad rush to obtain our property by pushing us to sign and sell immediately. But due to the extraordinary current pandemic crisis, we simply need more time," Kobernat wrote in an April 27 email to Army Corps and Border Patrol officials. "Our family is presently unable to safely confer with each other or our attorney as we need to -- due to my mayor, my governor and your boss' shelter-in-place rules."

Shortly after that, he began getting calls from the Justice Department telling him to cooperate with the Army Corps or risk a lawsuit.

They can choose to voluntarily allow the government to access and survey their land and, if the administration wants it, accept compensation that is supposed to be based on fair market value. But if they refuse, they are likely to be taken to court, where the government can use eminent domain powers to argue that the wall is an emergency and eventually take possession of their land. The government can then begin construction, even while continuing to argue with the landowners over compensation.

Ricky Garza, a staff lawyer for the Texas Civil Rights Project, said the timing of the government's push for private property had made what was already an uphill battle for the landowners even more challenging.

"They've taken advantage of people sheltering in place. People have not been able to seek out attorneys," Garza said. "We haven't seen any signs of it slowing down. The landowner is really at the mercy of what the government is trying to do."

Many of the property owners are still enlisting lawyers to negotiate. Some hope they can delay the process beyond the election, when the construction of the wall may not be as much of a priority.

But Trump is pressing forward as fast as possible. As the coronavirus spread in March, he tweeted, "We need the Wall more than ever," despite a top health official saying he had not seen evidence that physical barriers would prevent the spread of the virus. The president's border agency recently started a website showcasing videos of the wall's construction, months after Kushner and his allies pushed the Department of Homeland Security to livestream the building of the project.

The administration also has waived federal contracting laws to speed construction of the wall; 194 miles have been completed as of last week, up from 93 in December. All but 3 of the miles are in areas where dilapidated barriers existed or vehicle barriers once stood. The federal government also recently gave a nearly $1.3 billion contract to a North Dakota company backed by Steve Bannon to construct 42 miles of the wall, despite the Office of Inspector General for the Department of Defense examining an earlier $400 million contract given to the company.

With recent funding transfers from the Department of Defense, the administration now has $15 billion to build 731 miles of border wall. John Mennell, a Customs and Border Protection spokesman, pointed to data that suggested the agency could build about 500 miles of wall on federal border land, without private acquisitions. The agency has apparently tried to lower expectations in recent months, removing language from weekly border wall bulletins that said the administration expected to have 450 miles completed by the end of the year.

By the Trump administration's own logic, private land in southern Texas is where the wall is most needed. The border agency recorded more than 34,000 illegal crossings in the Rio Grande Valley in fiscal 2019, the most of any border sector.

"It is the shortest land route from the Guatemala-Mexico border to the U.S. It is an environment that is very difficult to enforce," said Gil Kerlikowske, the Customs and Border Protection commissioner under President Barack Obama. "It should be the focal point."