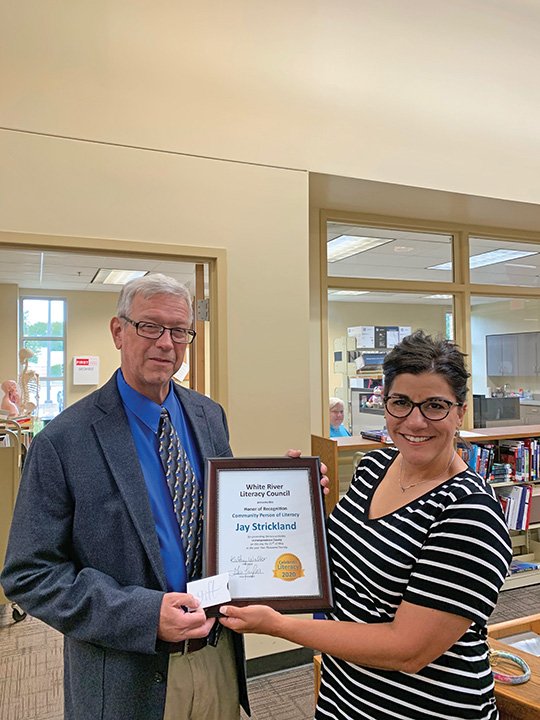 Gia Taylor, vice president of the White River Literacy Council, presents Jay Strickland of the University of Arkansas Community College at Batesville with the council’s 2020 Community Person in Literacy award.

Typically, name-calling isn’t something a principal wants to hear, but whenever Roger Ried heard his students at Southside Charter High School call someone a “Fred,” that would make him smile.

The “Fred,” in this case, is based on a book by Mark Sanborn titled The Fred Factor: How Passion in Your Work and Life Can Turn the Ordinary Into the Extraordinary. A copy of the book was given to each Southside student two years ago, illustrating that each person has the potential to be

In recognition of his advocacy for reading, the White River Literacy Council honored Ried, as well as others, with awards at a Celebration of Literacy via a Zoom meeting on May 21.

Winners are as follows:

Established in 2002, the White River Literacy Council is an affiliate of the Arkansas Literacy Association, which is part of the International Literacy Association. According to information from WRLC membership/technology chairwoman Tammy Gillmore, the organization’s goal is to spread the love of literacy throughout Independence County.

“Growing up, I didn’t like to read, even into adulthood,” Ried said, “but honestly, when I was growing up, we didn’t have magazines or books around the house, other than the Bible, and for a 14-year-old, that can be a little confusing in reading sometimes.”

At age 22, Ried went into education and became a principal at age 26. Now in his 33rd year, he recently retired as principal but said he plans to continue to work in education in some format.

What got him interested in reading was quotes, and soon, he was researching the context behind the sayings.

“That’s the kind of stuff that resonates with me when you talk about reading,” Ried said. “I think it will speak to students, whether now or 30 years from now.”

It was for the 2018-19 school year that the high school provided each student with a copy of The Fred Factor.

“It kind of goes along with the Martin Luther King Jr. quote. The book is about a mailman who kind of made it his mission to make other people happy, look after them and care for them. It was nice during the school year. You would hear, ‘He’s a Fred’ or ‘That’s a Fred thing to do.’ The book was being heard and making somewhat of an impact, for kids to being saying that to each other.”

For the 2019-20 school year, Ried chose a new book and presented it differently. He read One Word That Will Change Your Life, by Jon Gordon, and presented it in a video format, releasing one chapter at a time.

He explained that the book encourages readers to pick a word that will inspire them to be their best.

He said some of the students shared their “one word,” often words such as “perseverance” and “drive.”

“My word is “breathe.” … When I sit back and breathe a deep breath, I find more contentment, I find more rest and perspective, and that’s the word I share with my kids.”

Walter, who serves as president of the WRLC board, also retired recently as an English as a Second Language teacher, with 22 years in education, 19 at Batesville.

She said she has always loved reading and sharing that love with others.

“When I started college, my dream was to become a writer, but I realized that wasn’t very practical, so I got a teaching degree,” Walter said. “Reading is foundational to our democracy. People need to understand what is going on, and the only way to do that is if they know how to read and write.”

She said that as a teacher, she could see the students who excelled at reading and writing — as well as those who struggled.

“I see that pain in their faces, and I understand it because I’m not good at math,” Walter said.

“When a math teacher explains it on the board, they make it look easy, but when you try to work it, you can’t, and you feel dumb. You feel bad about yourself,” she said.

“Being able to read and write goes together,” Walter continued, noting that the first year she taught ESL, she saw students in 10th, 11th and 12th grades reading aloud and “stumbling over lower-level passages.”

“I thought, ‘We really need to do more to help them become better readers and writers,’” Walter said.

It seems as though children today are reading less than ever, she said.

Technology is a tool at most children’s fingertips, but with reading, Walter said, “They can accomplish anything they want.”

She noted a quote often attributed to Mark Twain, “The man who does not read has no advantage over the man who cannot read.”

Baker is another retired educator — after stepping down from teaching fifth- and sixth-grade math in 2008, she returned to education to serve as a math coach for grades K-12 for five more years.

She is also a member of the Kiwanis Club of Batesville.

“Kiwanis’ main focus is children, and we have a program that focuses on ages 0-5,” Baker explained.

She said Batesville Kiwanis members go to local preschool, Head Start and kindergarten classes to read. After reading to the children and discussing the book with them, the Kiwanians give each child a book to keep.

“We’ve given about 11,000 books since we started this program [in 1999],” Baker said, explaining that it started with Kiwanis member Marie Priest, a retired teacher who would go to West Elementary School to read to kindergartners. Priest was the only one doing it at the time, but the Kiwanis Club decided this would be a good project to take on.

Baker said Priest convinced her to join Kiwanis and to come on board as a volunteer reader 12 years ago. Then when Priest retired as the program chairwoman five years ago, Baker agreed to take over the position.

Then three or four years ago, the club decided to include its school service clubs in the reading program, Baker said. Kiwanis has service clubs in schools: K-Kids in elementary schools, Builders Club for middle/junior high, Key Club in high school and Circle K in college.

“It started out that the K-Kids wanted to read to kindergartners, but then I thought the Key Club would like to do that,” Baker said. “Now we have kids reading to kids, and they still get a book after (although Kiwanis members still read to the students as well). … Watching the kids read to the little ones is so cute. I just love it.”

She said she loves to read and now reads to her grandchildren.

“Stephen King has been my favorite author for a long time, but I like others, like John Grisham. We had a [young-adult fiction] author come to [Midland Elementary School], Neal Shusterman, and I read his books. I have a couple of grandchildren, teen/preteen, and sometimes I’ll pick up a book and read along with them.”

Reading is important, Baker said, because it is the basis for all further education.

“You visualize going places and seeing things in stories,” she said. “If kids don’t hear those stories, it’s harder for them to develop their vocabulary and their imagination.”