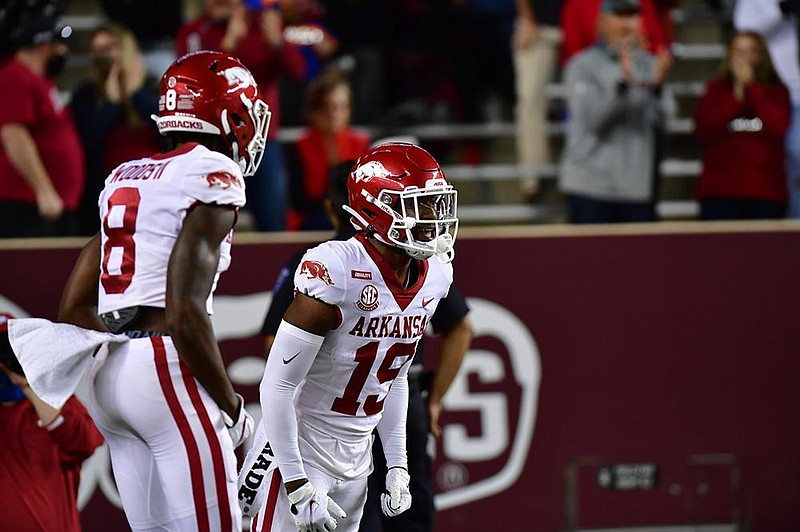 Arkansas receiver Tyson Morris (left) made his first touchdown reception of the season, catching a 1-yard pass from Feleipe Franks in the second quarter. (University of Arkansas/Walt Beazley)

The University of Arkansas lost one of its top players when safety Jalen Catalon was ejected for targeting with 59 seconds left in the first quarter of Saturday night's game at No. 8 Texas A&M.

Catalon, a redshirt freshman who has started every game this season, had 45 tackles coming into the game along with an interception return for a touchdown and forced fumble. He had one tackle Saturday night before his ejection.

Officials called Catalon for leading with the crown of his helmet when he tackled Aggies receiver Chase Lane along with linebacker Bumper Pool.

[Video not showing up above? Click here to watch » https://www.youtube.com/watch?v=eND1w2SpAjM]

Catalon was the first Razorback to be ejected for targeting this season.

Kellen Mond completed the pass to Lane for a 15-yard gain on the play, then Texas A&M gained another 15 yards on the penalty to move the ball to the Arkansas 15. Ainias Smith scored on a 15-yard touchdown run up the middle on the next play to give the Aggies a 14-7 lead.

The Aggies also lost a starting defensive back when Antonio Johnson was ejected for targeting in the third quarter on a hit he made on Arkansas tight end Hudson Henry after a 7-yard gain on a pass from Feleipe Franks.

The penalty came on the Razorbacks' first drive of the second half, which ended with A.J. Reed's field goal that cut the Aggies' lead to 28-17.

Arkansas defensive tackle Xavier Kelly, a senior graduate transfer from Clemson, made his first career start when the Razorbacks opened in a four-man defensive front.

Kelly became the 18th first-time starter for the Razorbacks this season.

Linebacker Bumper Pool and cornerback Montaric Brown were both back in the starting lineup for Arkansas after being out with injuries. Pool missed the previous game against Ole Miss, and Brown missed two games against Auburn and Ole Miss.

Arkansas went with Isaiah Nichols at defensive end, along with Julius Coates and Jonathan Marshall at defensive tackle.

Nichols' previous two starts this season were at defensive tackle. Coates made his first start since the opener against Georgia.

Razorbacks offensive lineman Ty Clary made his second consecutive start, but first this season at center.

After starting at guard in the previous game against Ole Miss, Clary moved to center, where he started the previous two seasons. Clary started at center in place of Ricky Stromberg, who SEC Network analyst Matt Stinchcomb said missed some practice time while in quarantine.

With Clary starting at center, Beaux Limmer was back in the lineup at right guard.

Stromberg played off the bench in the first half with Clary moving to guard.

For the first time this season, Arkansas scored on its opening possession of the game.

After forcing a punt by the Aggies, the Razorbacks drove 87 yards in 12 plays for a touchdown to take a 7-0 lead.

The Razorbacks went three and out with punts on their opening possessions of the first four games.

Arkansas running back Rakeem Boyd, who began his college career at Texas A&M in 2016 when he redshirted as a true freshman, went over the 2,000 rushing yards mark in the second quarter.

Boyd had a 16-yard gain to give him 2,001 rushing yards in three seasons with the Razorbacks.

Razorbacks defensive end Dorian Gerald played off the bench at Texas A&M after missing the previous three games because of an ankle injury he suffered in the season opener against Georgia.

Saturday night marked only the third game in the past 17 that Gerald has played for the Razorbacks. He suffered a neck injury in the 2019 opener against Portland State and missed the rest of the season.

Arkansas receiver Tyson Morris made his first touchdown catch of the season when he and Feleiple Franks connected on a 1-yard scoring play in the second quarter.

It was the third touchdown reception of Morris' career. He had one touchdown catch each in 2018 and 2019.

Arkansas was featured on the SEC Network and ESPN's GameDay on Saturday in a piece about how coaches work to change the culture of programs.

The segment focused on the early success this season of the Razorbacks, who were 2-2 entering Saturday, and Indiana, which upset No. 8 Penn State last week in overtime.

Coach Sam Pittman was shown in a pair of clips shouting out, "Turn that damn jukebox on!" after the team's 21-14 upset at No. 16 Mississippi State and its 33-21 win over Ole Miss on Oct. 17. He also conducted an interview for the feature.

"Our message has been every day: Everything matters," he said. "We're trying to set a culture that we're Arkansas and we ought to win football games."

A clip of Arkansas Athletic Director Hunter Yurachek presenting Pittman the game ball after the win at Mississippi State was also included.

"That's probably been the most gratifying thing about the two wins that we have is that the kids are able to be proud of being a University of Arkansas football Razorback," Pittman said.

In the segment, ESPN analyst Kirk Herbstreit predicted a close game between the Razorbacks and Aggies later that night, and he touted Arkansas defensive coordinator Barry Odom.

"Arkansas doesn't give up the big play," Herbstreit said. "Barry Odom, talking about the Frank Broyles Award, the assistant coach of the year award, he's got to be in the early going a guy you've got to look at it with the job he's done with that defense from where they were. They're not giving up big plays."

The buses that brought Arkansas Coach Sam Pittman and the Razorbacks to the game Saturday had "Sam's Limousine Service" written on their sides.

The Razorbacks had a couple of jersey changes, with freshman Khari Johnson taking over the No. 0 formerly worn by Jerry Jacobs, and freshman Marcus Henderson returning to his No. 56 jersey as an offensive lineman after wearing a tight end's No. 83 the first four games.

Johnson had been in No. 19 and No. 4 so far, but the 0 came up when Jacobs announced he was opting out of the rest of the season and preparing for the NFL Draft.

The last quarterback to lead Arkansas to a victory at Kyle Field was at the game Saturday night.

Quinn Grovey, the color analyst for the Razorbacks' radio broadcast, was the quarterback when Arkansas won 23-22 in 1989 at Texas A&M.