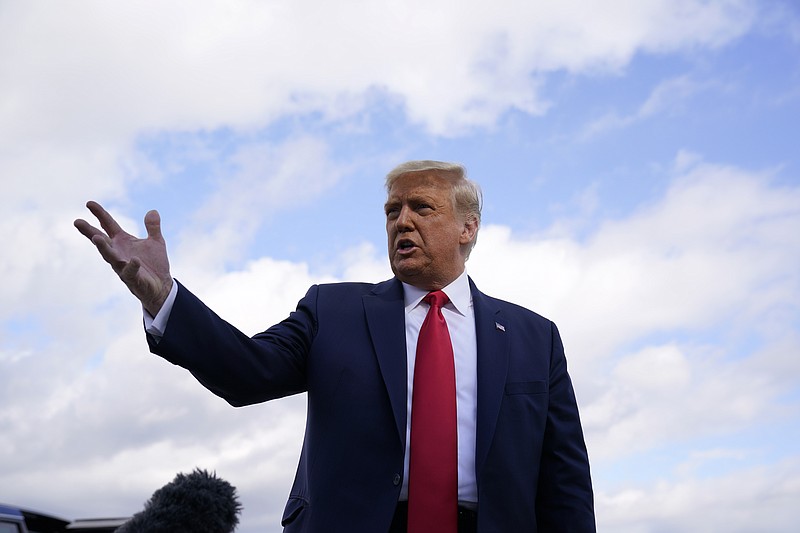 President Donald Trump speaks before boarding Air Force One upon departure Saturday, Oct. 31, 2020, at Andrews Air Force Base, Md., as he departs for campaign rallies in Pennsylvania. (AP Photo/Alex Brandon)

No service members were injured in the raid.

"This American citizen is safe and is now in the care of the U.S. Department of State," said Jonathan Hoffman, assistant to the secretary of defense for public affairs. "The United States will continue to protect our people and our interests anywhere in the world."

The assailants forced Philipe Nathan Watson, 27, from his farm in remote Massalata on Tuesday, demanding more than $1 million from his family, who are missionaries. Otherwise, they threatened to sell the captive to extremists, said a U.S. official, who was not authorized to discuss the matter publicly.

"Last night, our Country's brave warriors rescued an American hostage in Nigeria," President Donald Trump tweeted Saturday. "Our Nation salutes the courageous soldiers behind the daring nighttime rescue operation and celebrates the safe return of yet another American citizen!"

Secretary of State Mike Pompeo said in a statement that the rescue by "some of our bravest and most skilled warriors" underscores the U.S. commitment "to the safe return of all U.S. citizens taken captive."

Walton is now back in Niger.

Another American kidnapped in Niger is still missing.

Trump has repeatedly promoted his administration's focus on securing the release of American hostages held by militant groups abroad as well as others being detained. Last month, two Americans held captive by Iranian-backed militants in Yemen were released, along with the remains of a third person, in exchange for the return of about 250 of the Houthi rebels from Oman.

Groups linked to al-Qaida and the Islamic State group have made tens of millions of dollars from kidnappings in recent years, analysts say.

The extremists gained a foothold nearly a decade ago in the Sahel, which lies just south of the Sahara Desert, after the Libyan government collapsed and mercenaries once employed by Moammar Gadhafi streamed into neighboring Mali.

Violence has since spilled into Niger and Burkina Faso, turning once-peaceful countryside into conflict zones.

The nation's military has partnered with French and regional troops to fight rising extremism in West Africa. More than 5,000 people have died in the unrest this year alone, according to the Armed Conflict Location & Event Data Project, which tracks the casualties.

Hundreds of American soldiers are stationed at two bases in Niger, a country of roughly 24 million. U.S. forces normally provide training and intelligence support in the region. Saturday's operation was extremely rare, the official said.

Information for this article was contributed by Eric Tucker, Lolita C. Baldor and James LaPorta of The Associated Press; and by Danielle Paquette of The Washington Post.