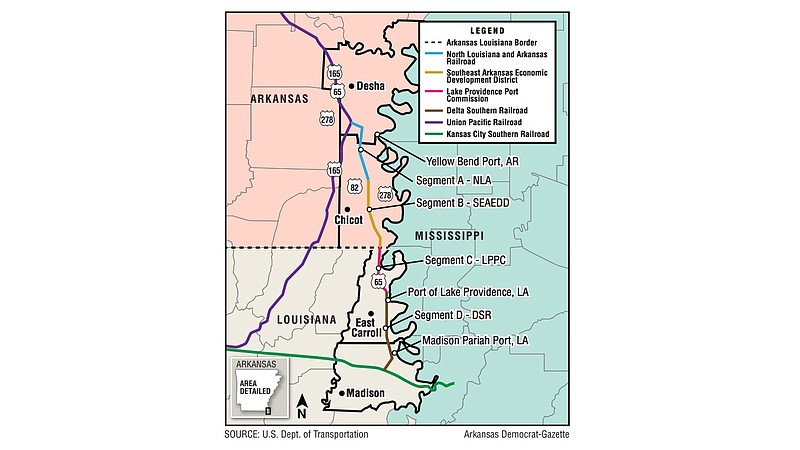 This graphic shows details of a railroad that's one of the big-ticket items on the plate of the Southeast Arkansas Economic Development District.

Editor's note: This is part two of a two-part series on the Southeast Arkansas Economic Development District.

The Southeast Arkansas Economic Development District is all about projects. Sometimes a project is worth hundreds of thousands of dollars or more, and sometimes it might just be a police car that a mayor is needing. But toward the top of the district's to-do list is to get its own house in order -- literally.

The current location for the district offices is at 712 S. Walnut St. The building used to be an auto-parts store, but the current occupants have been there for decades. Then the floor started sinking, and sinking some more, said Patrecia Hargrove, executive director.

"We were in here the whole time while that was going on," Hargrove said, shaking her head. "And because it was raining a lot, weeks became months, and it was all just a muddy mess."

Once that work was finished, another problem hit.

"I came in one Saturday and said, 'What's that noise?'" she said. "As it turned out, it was raining in the building."

She said she didn't know if the roof leak was from a hailstorm or was a result of the building's structural problems, but water running through the building was the last straw for her.

"That sealed the deal," she said. "We needed a new building."

Because the office building has a roomy parking lot, the process will go easier than it otherwise might have. Hargrove said they will continue working in the current offices while a new building is being built on what is now the parking lot. When the building is finished, they will raze the current building, and that space will be used for parking.

The construction is estimated to cost $2.4 million, with $2 million of that coming from the federal Department of Commerce's Economic Development Administration. The rationale for the new structure is that more employment training will be conducted at the SEAEDD offices, Hargrove said, with another reason being a Federal Emergency Management Agency disaster declaration that involves maintaining strategic planning capabilities and being resilient to disaster.

Another big-ticket item on the district's plate is the rehabilitation of a railroad line down deep in southeast Arkansas. The district bought 21 miles of short-line rail that runs from Lake Village to the Louisiana state line. The segment of rail line was purchased about 10 years ago for $700,000, in concert with four other railroad and development entities, with the purpose being to save the line for future business needs.

The entire short-line railroad is 91 miles long and is called the Southeast Arkansas and Northeast Louisiana Multimodal Freight Corridor.

There are a total of five partners in this venture: the Southeast Arkansas Economic Development District, the North Louisiana and Arkansas Railroad; the Lake Providence Port Commission; the Madison Parrish Port Commission; and the Delta Southern Railroad, with each of the five members owning a segment of the corridor.

The various entities joined forces to purchase the section of track because of the potential they see in maintaining it.

"It's crucial because we have businesses in those areas that have an interest in rail," Hargrove said. "If we can get that rail line up and going, there is a lot of interest from businesses that would like to come in."

A Department of Transportation information sheet issued last year said the project's benefits "support economic vitality by restoring this route ... which will allow rail to travel up to 25 mph, and handle modern, full-size, 286k lbs. rail car loads. This will enhance the productivity of the line, and provide better, more efficient service for the current shippers, as well as making the line a more attractive option for other shippers in the region."

The project got a $10.5 million boost last year from the Federal Railroad Administration to help rehabilitate the line. Hargrove said the state of Arkansas and the Economic Development Administration have already done some work on the project by paying to renovate some bridges, cross ties and some of the rail itself. And the railroad administration funding, she said, will help get the main part of the line open.

Hargrove said that before work started on the line, it looked pretty pathetic.

"If you had seen it," she said, "it looked like a carnival ride" with dips and twists and turns one does not normally see on rail lines. "But we all understood the initial importance of getting this segment up and running. When it's operational, it'll be well worth it."

Another project that is just now being assessed by SEAEDD will help small businesses. The district has been approved for $2.1 million from the Economic Development Administration to be used to help businesses that have been negatively affected by the covid-19 pandemic.

"It's so new, we have to determine the criteria for how to distribute the funds," Hargrove said.

"The goal is to get the funds out to businesses as soon as possible," Hargrove said. "We need to get the information out to the public so that businesses can apply for those funds. We want to make sure that small businesses in each of our 10 counties gets some benefit from it. We just want to get it right."

The district also operates another, much smaller revolving loan program for its members. The seed money started with a federal grant from the Economic Development Administration years ago. Loans are made to small businesses in the area, with the program operating on the interest the businesses pay.

County Judge Mack Ball of Chicot County, who is the president of the SEAEDD board, said the overall condition of the agency is good, although when the office of the U.S. president changes, "things change." He said that currently, he would say that the amount of money available in grants to the district "is in a dry season," but he added that he couldn't really complain because he had "maxed out on grants this year."

Ball has been a county judge for 11 years and said he had reached out to the district for assistance every year.

"They are helpful," he said. "They aren't going to tell you what to do. But if you call them, they are there to help. You know you can go to them, and if you need a grant, they'll try to find it for you."

Ball said he was able to get a $1.62 million grant for a Eudora factory that wanted to upgrade its equipment and expand. He also received a historic preservation grant for the courthouse in Lake Village.

"I just go to them for everything," he said with a laugh. "They're successful, and I guess that's why."