'Over the Moon' brings Chinese myth to Netflix 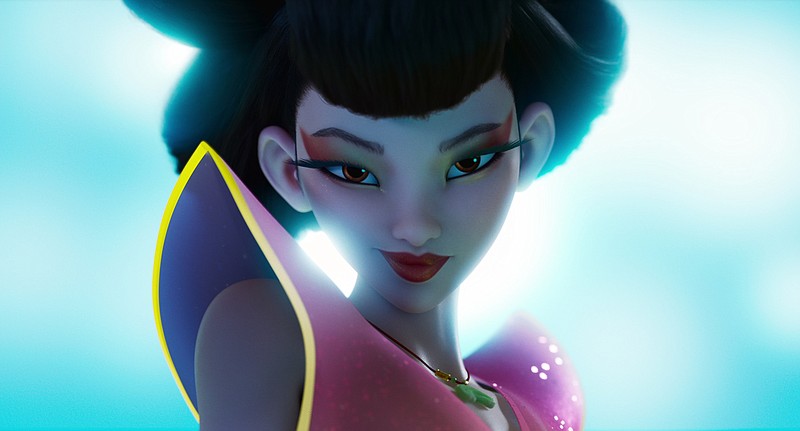 Chang’e (voiced by Phillipa Soo) in the movie “Over the Moon.” (Netflix)

Phillipa Soo first heard of Chang'e, the famed goddess of Chinese mythology who lives forever on the moon, from a children's book read to her by her parents. "I'd look up at the moon and imagine that I could see her there with her jade rabbit," she said.

It wasn't until the "Hamilton" actress was cast as the legend in the Netflix animated feature "Over the Moon" that she researched the myth's many versions across Asian cultures. In some, her lover Houyi set aside immortality pills for them to be together forever, but Chang'e nobly ingested them both to stop an enemy from stealing them. Others say she selfishly took the two for herself and fled to the moon with a rabbit in tow, leaving her lover alone on Earth.

Most of the narratives end there. "She's very beautiful and revered, and she's a big part of the Moon Festival," said producer Peilin Chou. "But what has she been doing up there all this time? How has she been impacted by this eternal separation from her true love? We took some liberties and really let our imaginations run wild."

So when a grief-stricken teen named Fei Fei (Cathy Ang) builds a rocket to the moon, the curtain falls to reveal Chang'e, an unfathomably fabulous pop star. She performs moves by Blackpink choreographer Kyle Hanagami. And she introduces herself to this teen — and the audience — with "Ultraluminary," an irreverent and catchy song that had Soo dancing nonstop inside a tiny recording booth.

"It shows how undeniably powerful she is because it demands people to dance, like you seriously just can't help it," said Helen Park, who wrote the film's songs with Christopher Curtis and Marjorie Duffield.

"And it has this delicate, vulnerable bridge because, like everyone, she has pain. But that doesn't get in the way of her rising up and being this magnetic force. I think it's a great message for girls around the world to own their confidence."

Like the changing phases of the moon, Chang'e has many sides, mirrored by the tempos and themes of her songs.

"It's clear she's got a lot of personal feelings she has to work through," said Soo. "She's so desperate to be reunited with her loved one, and it comes out sideways, at the expense of having a little bit more kindness. That rage and frustration comes out of just being so ready but feeling so helpless really."

Chang'e finally finds herself face-to-face with Houyi (Conrad Ricamora) for the movie's emotional climax, in which the couple sing a few lines in Mandarin.

"It was so meaningful to connect to my heritage in that way, especially since I'm the only grandchild in my family who doesn't speak the language," said Soo, whose pronunciations were guided by Chou. "Singing in a foreign language for the first time, I really wanted to do that moment justice."

Chang'e and Houyi are reunited only briefly. And she's left to learn — amid sudden heartbreak and disappointment —that though they won't ever be together again, their love remains eternal.

This is the lesson and legacy of the film's late screenwriter Audrey Wells, who also wrote "Under the Tuscan Sun" and "The Hate U Give" and intended for this fantastical journey to have immediate, real-world applications.

"She left this movie behind as a gift for her daughter and her husband, to let them know that, while she has left the earth, their love will last forever," Chou said. "So we had to get this right because it's the message of the movie."

That's why the last song is "Love Someone New," a ballad in which Chang'e and Fei Fei face the grief they've each been carrying. "The song uses that yearning melody from the song from the beginning, 'Rocket to the Moon,'" said Park.

"But this time, it feels more transparent or as if it were cracked open because she's not just singing it up to the sky, she's singing it to another person. It's a new friendship formed between these two hurting people."

It's a sentiment that's all too familiar, as countless have experienced losses of all kinds due to COVID-19. "These two characters feel like they're very different from each other, but they come together and realize they actually need each other in order to move forward," said Soo.

"It's such a great lesson in how love can be found in unexpected places, even though it's hard to reach out and ask for help. I think we're all feeling like we're in need of healing right now."