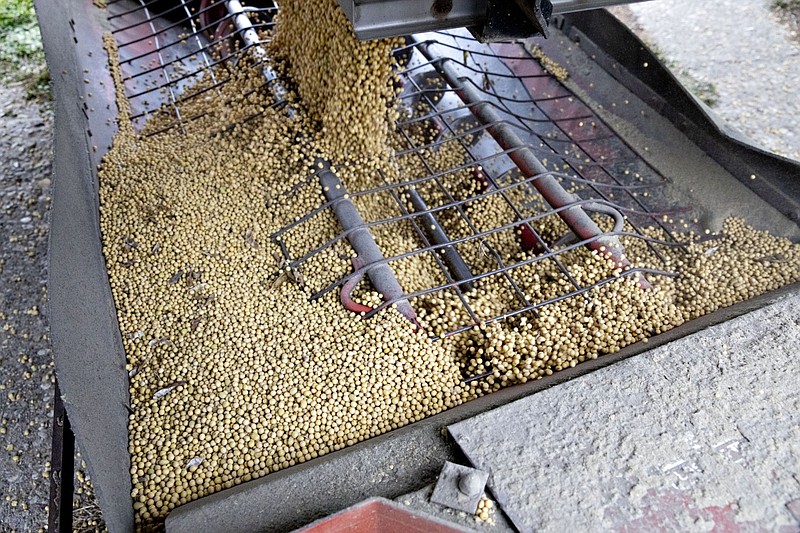 Soybeans are unloaded from a semi truck at a farm in Wyanet, Ill., on Oct. 19, 2019. MUST CREDIT: Bloomberg photo by Daniel Acker.

The U.S. has started selling soybeans to Brazil after the world's top exporter lowered import tariffs in order to bridge a domestic shortage.

At least one cargo was sold to the South American nation in October, with several trade houses looking into how they can make the transaction work, according to people familiar with the matter, who asked not to be identified because the information is private. The load will be shipped from a U.S. Gulf port this year, the people said.

Brazil is facing a domestic shortage of soybeans after shipping a record amount of the oilseed to China, the world's biggest buyer. To help bridge the shortfall, the government announced last month that it would suspend the import tariffs on corn and soybeans from outside the Mercosur bloc.

"The Brazilian market just keeps going up so crushers will find ways to bring in soybeans from the U.S.," said Tarso Veloso, an analyst at AgResource in Chicago. "We have already started to see traders making some moves, but volumes will really depend on the company and where it's located."

Still, traders aren't expecting a wave of supplies to move from the U.S. to Brazil. That's partly because Brazilian ports are set up for exports and "reverse engineering the setup is time and resource-intensive," the U.S. Department of Agriculture said in a report last month. Also, many processing plants are in the interior of the country, far away from ports.

There's also the risk of the presence of a GMO-variety that's not approved in Brazil. Crop varieties get mixed up in U.S. silos and there are at least nine commercially available biotech varieties of both corn and soybeans approved for cultivation in the U.S. that aren't allowed in Brazil, the USDA said.

"As grains are not sorted by varieties prior to export, any potential Brazilian importer would need to submit a special approval request to the National Technical Commission on Biosecurity," the USDA said. "There are only two [of those] meetings scheduled for the rest of 2020, and each request, if submitted, would have to be considered on case-by-case basis."

Still, Brazilian crushers need the soybeans, especially as the next harvest is expected to be delayed by dry weather. The tariff waiver on soybean imports will last until Jan. 15 and the suspension for corn until March 31.