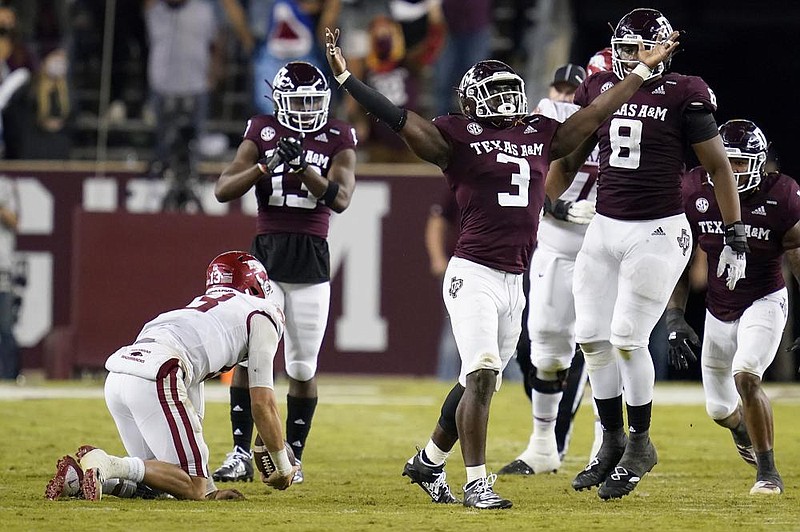 COLLEGE STATION, Texas -- On a historic night for quarterback Kellen Mond, No. 8 Texas A&M put a definitive end to the streak of tight games against the University of Arkansas in the Southwest Classic.

Mond racked up 292 total yards to surpass 10,000 in his career to become Texas A&M's all-time leader and led the Aggies on six consecutive touchdown drives to spur a 42-31 win over the Razorbacks.

The Aggies continued their recent mastery in the series, tying an Arkansas run from 1958-66 as the longest winning streak in the series. Five of the last six games had been decided by a touchdown or less, with three of them going to overtime, but this time the Aggies built a 42-17 lead late in the third quarter then geared down their offense to run clock and hold off the Hogs.

The Aggies prevented the Razorbacks from winning back-to-back games for the first time in three years, since downing Ole Miss 38-37 and Coastal Carolina 39-38 in 2017.

The Arkansas defense, which had forced seven takeaways in a 33-21 victory over Ole Miss two weeks ago, could not pry the ball away from the Aggies and could not get pressure on Mond in a turnover-free game.

Mond completed 21 of 26 passes for 260 yards and 3 touchdowns, was not sacked and rushed for 32 yards. He boosted his career total offense to 10,015 total yards, surpassing the school record of 9,989 formerly held by Johnny Manziel.

"He's been in this league quite a while," said Arkansas linebacker Bumper Pool, who a game-high 14 tackles. "I thought they were very prepared, and Kellen Mond played very well. I mean, he didn't make any mistakes. When you get a guy like that in the SEC playing like that, they're going to be successful. We didn't do enough to interrupt him."

The Arkansas defense also struggled to get off the field through a vast portion of the middle of the game. Texas A&M converted 7 of 11 third-down plays and held the Razorbacks to 3 of 11 on third downs.

"The bottom line is if we can't get pressure on the guy and he's sitting back there, guys are going to eventually get open and that's what happened tonight," Pittman said. "They caught the ball well and blocked well and basically did whatever they wanted to a lot of the time on third downs."

Texas A&M Coach Jimbo Fisher said he was proud of how hard his team competed and the fact the Aggies had no turnovers.

The Razorbacks also lost ace safety Jalen Catalon in the first quarter due to a targeting call causing Arkansas to go deeper into its depth in the secondary.

Arkansas jumped ahead 7-0 by scoring on its first possession of the game for the first time this season on Treylon Burks' 6-yard touchdown catch from Feleipe Franks. But the Aggies bounced back to take a 21-7 lead before the Razorbacks could respond again.

"We tried to do anything, whatever to win," Franks said. "That's the main objective, whatever it takes whether it be me running, me passing ... doesn't matter. I thought we did a good job today, the offensive line, getting the run game going more. And Rakeem, Trey did a good job running the ball."

Burks turned in another big performance with 7 catches for 117 yards and 2 touchdowns. He surpassed 100 receiving yards for the third time this season.

Reserve tailback Ainias Smith and tight end Jalen Wydermyer scored a pair of touchdowns apiece for the Aggies, who have found their offensive stride since beating Vanderbilt 17-12 in their season opener.

Wydermyer, a 6-5, 265-pound sophomore, turned into a matchup nightmare, finding open spaces in the Razorbacks' secondary and catching six passes for 92 yards.

Arkansas scored a touchdown on its first possession for the first time since last Oct. 12 at Kentucky with a 12-play, 87-yard march after forcing an Aggies punt on the game's first series.

The Razorbacks operated fast and showed a good blend of run and pass on the touchdown sequence. Boyd had five carries for 27 yards, and Franks added a 28-yard run. Franks also went 4 for 4 on the drive for 24 yards.

Arkansas converted a pair of short third-down plays on the series, including a 1-yard run by Burks from the Wildcat formation to the Aggies' 6. On the next snap, Burks ran a tight out route against Devin Morris and Franks delivered a strike for the game's first score.

The Arkansas defense, which had played to great acclaim in recent weeks, got a stop on the first Texas A&M series. However, the Aggies scored on their next four possessions in the first half, driving 75, 58, 69 and 74 yards in methodical fashion, converting a few third-and-longs along the way and overcoming some holding calls.

Mond stood in the pocket and delivered strikes while completing 13 of 16 passes for 177 yards and 2 touchdown in the opening half, and the Aggies also established their running attack.

Texas A&M built a 21-7 lead midway through the second quarter when Wydermyer's 6-yard touchdown catch over Hudson Clark punctuated a 69-yard sequence in which the Aggies overcame two holding calls.

Arkansas powered right back into contention with a 75-yard touchdown drive. The series included a fourth-and-2 conversion, as Burks hauled in a 36-yard pass from Franks to the Aggies 15. Franks found Blake Kern for a 14-yard strike on the next play.

Operating swiftly, Franks fired a bubble screen to Tyson Morris on the next snap, and with blocks from Mike Woods and Burks, Morris found his way into the end zone to make it 21-14.

Trailing 28-17 at halftime, the Razorbacks drove inside the Aggies red zone on the first series of the second half but had to settle for A.J. Reed's 34-yard field goal.

The Aggies sandwiched a pair of touchdown drives -- during which Mond went 8 of 9 for 83 yards -- around a defensive stop to take command at 42-17 with 56 seconds remaining in the third quarter.

Arkansas finally got third down defensive stops after that and notched touchdowns on two of its final four drives on Burks' 16-yard catch and Boyd's 14-yard run but it was too little too late.