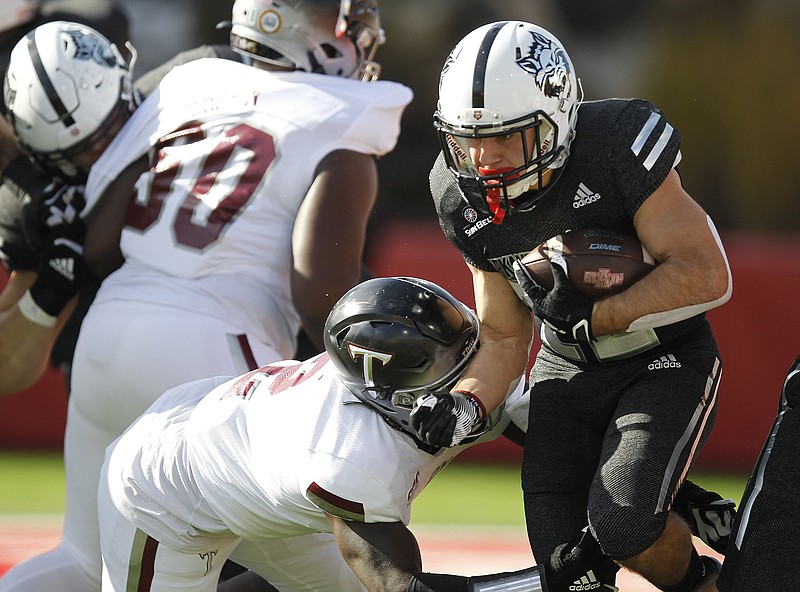 Arkansas State running back Lincoln Pare (22) shakes off Troy linebacker Carlton Martial (2) during the first quarter of the Red Wolves' 38-10 loss on Saturday at Centennial Bank Stadium in Jonesboro. - Photo by Thomas Metthe of Arkansas Democrat-Gazette

JONESBORO -- The defense did its job Saturday for Arkansas State University. By no means was the unit perfect, giving up 487 total yards, but when it had to make stops, it did.

Instead, it was the ASU (3-4, 1-3 Sun Belt Conference) offense that struggled Saturday, squandering multiple opportunities to get back in the game for the second week in a row while falling to Troy 38-10 at Centennial Bank Stadium. The loss marks the first time since joining the FBS that Arkansas State has lost three games in a single season by 28 points or more.

"Very frustrated. Very disappointed, obviously," Coach Blake Anderson said. "Felt like with the week of work we had and the energy level we had all week and how physical practice was, how competitive they were, that we would play much better."

Arkansas State's sideline seemed low on energy Saturday -- specifically on the offensive side of the ball -- with guys hanging their heads and emotions muted. It was only 49 days earlier that the Red Wolves upset Kansas State on the road.

With the latest loss, the team's confidence has made a complete about-face.

"I think confidence has a lot to do with it," Anderson said. "We talked today and talked a lot this week about playing to win, not playing not to lose. I think guys are concerned about making a mistake. Guys are out there for the first time, and they don't want to be the guy that makes the mistake or gives up the touchdown or whatever.

"You can't play good football if you're concerned about making mistakes. You've got to play with confidence. And we're lacking some of that right now."

The momentum appeared to be on Arkansas State's side late in the third quarter, following a touchdown pass from sophomore Layne Hatcher to senior Jonathan Adams Jr. and a three-and-out by Troy (4-2, 3-1) that gave ASU the ball with 2:50 left in the third trailing 24-10.

Three-and-out, punt. After another defensive stop, another three-and-out resulted early in the fourth quarter. On ASU's third attempt to make it a one-possession game, junior quarterback Logan Bonner fumbled and Troy returned it for a touchdown, ending any notion of a comeback.

"That's two weeks in a row that offensively we've had too many empty possessions," Anderson said. "Frustration after frustration offensively to try and get points.

Arkansas State dug itself a hole early, falling behind 14-0 in the first quarter as Troy junior backup quarterback Jacob Free found wide open receivers on both scores. ASU was outgained 251-40 in the opening quarter. Adams, who caught five passes for 64 yards and scored ASU's only touchdown, dropped a wide-open pass on ASU's second offensive play of the game that would have tied it at 7-7.

It was opportunities like those, both in the first and second halves, that cost the Red Wolves.

"I feel like if I would have caught that ball, we would have put a spark on the whole team," Adams said. "[The issues] are everywhere. Across the board."

Troy looked poise to take a three touchdown lead to start the second quarter, but the Red Wolves made a goal-line stand, forcing a turnover on downs that started a drive that resulted in a 39-yard field goal by junior Blake Grupe -- ASU's only points of the half. Troy added 10 more points to take a 24-3 lead into halftime.

The teams traded punts to start the third quarter before Arkansas State got in the end zone on a 3-yard touchdown pass from Hatcher to Adams, which was set up by a one-handed, 35-yard grab by Adams two plays before. ASU trailed 24-10 heading into the final 15 minutes.

After the game, Anderson sat hunched over staring at the floor while his players fielded questions from the media. He knows things aren't getting any easier, with a trip to Louisiana-Lafayette set for Saturday.

For now, all Anderson can do is go right back to work.

"Where's my head at? Stay up here tonight and watch every snap of tape, meet with both sides of the ball and start over [Sunday]."