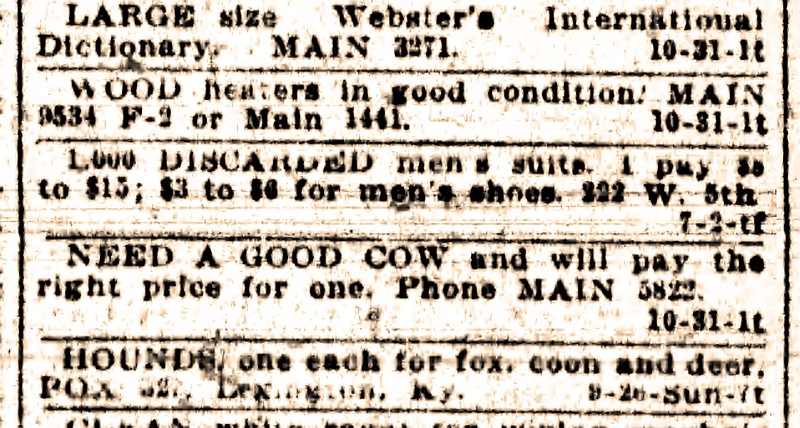 Part of the Wanted to Buy classified ads in the Oct. 31, 1920, Arkansas Gazette. (Arkansas as Democrat-Gazette)

It has been a minute since we last read classified advertisements as they appeared in the Arkansas Gazette 100 years ago.

Classified ads were not free then, but so many people used them that even the smallest daily edition (the Monday paper) usually included a page of classifieds. Sunday's fat issues typically had four or five pages of "class-ads," tiny things, densely packed into skinny columns divided by skinny rules.

The cost in 1920, payable upfront, was 10 cents a line, seven words per line; and no ad counted less than three lines. You could see your three-line ad in print three days in a row for 75 cents. Seven consecutive insertions cost $1.50.

Numbers counted as words, and addresses were not free.

These ads were succinct, sometimes cryptic. They had a jargon that explains phrases we struggle to decode today, but mostly they had typographical errors.

From the boilerplate atop the Classified Section of Oct. 31, 1920:

The little ads were "classified" by being grouped under standard headings, many of which we see today: Wanted to Rent, Wanted to Buy, For Sale, Help Wanted, Business Opportunities.

Each category had subcategories, such as For Sale — Real Estate; For Rent — Farms; For Rent — Warehouses. Some categories we would seldom or never see today: Help Wanted — Male; Help Wanted — Female; Wanted to Borrow; Typewriters; Strayed or Stolen.

If people didn't submit their ad before deadline, it was "too late to classify" and printed under Too Late to Classify or Miscellaneous.

On that long-ago Oct. 31, readers whose eyes slid past the final ads could read about a father and son building a "bungalow on wheels" in the backyard of their home on Staten Island, N.Y. They intended to drive it to Florida. They would cook their meals in its little kitchen, bathe in its little bath and sleep inside, beating the high cost of living. Their St. Bernard would go along.

From "Facts About U.S.A." from the U.S. Geological Survey, readers learned that Cuba, if transposed directly north, would extend from New York City to Indiana and Havana would lie west of Cleveland.

Near this was a story about a postcard that had spent 17 years in the mail and traveled 12 miles. Dropped into a letterbox in 1903 by a surveyor of docks along the Harlem River at New York, the card contained a report addressed to the superintendent of docks. It had just been delivered — to the man who wrote it. Frank O'Keefe, the sender, through a series of promotions, had become superintendent of docks.

Below that was a story about an altercation in a poor sector of Vienna between a former Austrian army officer and a working man who objected to the clatter of the uniformed officer's spurs. Words were exchanged; the officer sued for defamation and won a judgment against the working man as well as permission from the court to "wear the splendor of his former estate when and where he would."

The working man's case was that he and all his neighbors objected to "the reminder of the old-time authority of the military class."

Also crammed under the classifieds was "Soviets Use No Keys." A Western reporter had made this discovery:

When the Associated Press correspondent, who recently crossed Russia, asked for a doorkey in one of the nationalized hotels at Omsk he was informed by the hotel "commissar," formerly the owner, that under the Red regime, doors are not supposed to be bolted.

The reporter appealed to the Bolshevik commandant at Omsk and obtained an official document granting him a key and permission to lock his door.

The classifieds themselves were a good read, presenting vivid evidence of a world in transition from horse to auto but still enthralled with snake oil. The same day's five-page ad section included nine tiny offers of Livestock for Sale and 1 ½ columns of used cars.

From the livestock column, you could buy "10 head of good cows with calves" that had to be sold that very day, or a high-class young Jersey milk cow that would give five or six gallons daily and was "not cheap."

Otto Siegle of Arch Street was selling two train carloads of "heavy milking real Jersey cows" and one carload of 2- and 3-year-old real Jersey heifers. Some were "fresh" now but others would be fresh within 60 days. All of these cows were young and "you will find no better cows anywhere." All had been bred to a real registered Jersey bull, although they had no papers. All were a fine fawn color. They were all so fine and definitely real.

Also on offer was:

One milch cow, giving 4 gallons a day; with malf 3 weeks old; can be bought right.

"Milch" is the old-fashioned term for a milk cow. "Malf" must have been a typo. As for the meaning of "bought right," your guess might be better than mine; but I have seen that term elsewhere in old classifieds. I think it meant the seller was the sole owner and had the right to sell. But I could be wrong.

Not to be confused with the category To Exchange was the category For Sale or Exchange. On Oct. 31, someone with 40 acres in Saline County, 20 of them under cultivation, was willing to trade them for city property or a "light car."

A North Little Rock resident wanted to trade an L.C. Smith typewriter, an 8 hp gasoline engine and a "saw outfit" for "second-hand lumber."

The best classified advertising often is the Personals. The Personals from Oct. 31, 1920, held an offer for "12 funny love letters, reading two ways" and a pitch for a date bar recipe. A North Little Rock woman sought the whereabouts of her son, Arthur Hawk, last seen in Crittenden County at Haefer. And someone wanted to hire: 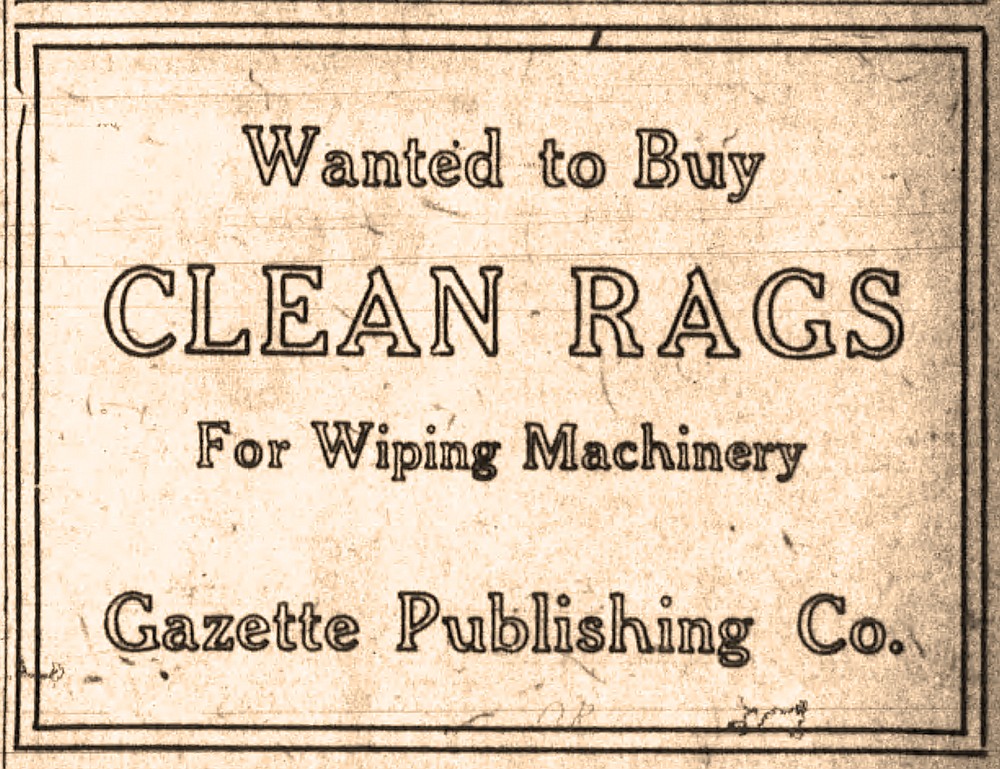 In 1920 the Arkansas Gazette advertised in its classifieds that it would pay 6 cents a pound for rags. (Arkansas Democrat-Gazette)
ADVERTISEMENT