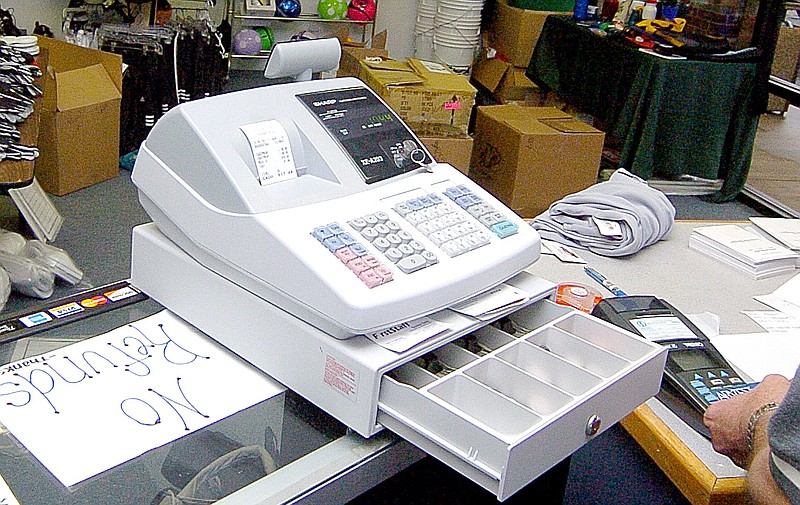 FAYETTEVILLE -- Local officials received good news and bad news in their monthly sales tax reports for October, with Rogers and Bentonville showing drops in revenue while Fayetteville and Springdale, along with both Benton and Washington counties, experienced increases.

Sales tax revenue reported in October reflects taxes collected by merchants on sales made in August.

Casey Wilhelm, finance director for the city of Rogers, said the drop puzzled her.

"It's not what I wanted to see," Wilhelm said. "I don't know where that would have come from."

Wilhelm said Rogers is still on track to hit its budget target of about $19.9 million, but the city is going to budget for no increase in 2021 out of caution.

The city's history shows steady growth since about 2012, when the country began recovering from the "Great Recession" in which the city's 1% sales tax revenue dropped for two consecutive years in 2010 and 2011.

"We've had $2 million a year growth in some of those years. We're not projecting that for next year," she said.

Wyman Morgan, finance director for Springdale, said his city's revenue from its 1% sales tax should hit a new record this year. Morgan said he estimates the tax revenue will exceed $17 million by the end of 2020. In 2019, Morgan said, the sales tax revenue was about $15 million.

"We may skip $16 million and go up to $17 million this year," he said. "I wouldn't have thought that seven months ago when the pandemic started we would have this kind of growth."

National, state and local governments declared health emergencies in mid-March when the covid-19 pandemic began. With restrictions placed on activities and social distancing being encouraged, many businesses closed temporarily or reduced their business. Some restrictions have been eased while others remain.

Morgan said construction has been steady in Springdale throughout most of the year and remains an important part of the city's economy.

"Last month, sale of building materials were up, so construction was probably up as well," he said. "There are at least two housing developments going up now near the new city park in northwest Springdale."

Paul Becker, Fayetteville's finance director, said he's happy with the growth shown from August sales, but said he still has concerns about the remainder of the year.

Becker said the city has seen growth in revenue from Internet sales, which has more than offset declines in in-person shopping.

The restrictions that remain in place because of the covid-19 pandemic could hurt the city's sales tax collections through the end of the year, he said.

Events such as the annual Bikes, Blues & BBQ rally in September, which was canceled this year, and Razorback football normally keep sales tax revenue strong. With attendance at the Razorback games limited, Becker said, hotels and motels and restaurants in Fayetteville and Northwest Arkansas won't have the same level of business.

"I expect to take a hit in the fourth quarter," he said.

Jake Harper, Bentonville's finance director, said he focuses on the year-to-date totals rather than month-to-month. Harper said Bentonville frequently sees monthly totals fluctuate because of companies applying for and receiving rebates on sales tax revenue for some larger projects.

"We're still on track to make the city's budget," Harper said. "I remain cautiously optimistic that we'll end the year on solid footing."

Brenda Guenther, Benton County's comptroller, said the county revised its budget projections in June from about $11.4 million to about $10 million and is ahead of the revised forecast.

In Washington County, Treasurer Bobby Hill said the county has come through the year in better financial condition than he initially expected after the pandemic began.

"We will easily meet my projections," he said.

Hill said he shares Becker's concerns about the fourth quarter of 2020, but is optimistic about the county's 2021 budget.

"I'm looking for it to level out the next few months, but I'm treating next year like a normal year," he said.

Cities, counties and other taxing entities receives revenue from local sales taxes monthly from the state. Merchants collect taxes on their sales and send that money to the state after the end of each month. The Department of Finance and Administration calculates the amounts due to the taxing entities and remits the money to them. Sales tax revenue received by cities and counties in October is from sales in August.