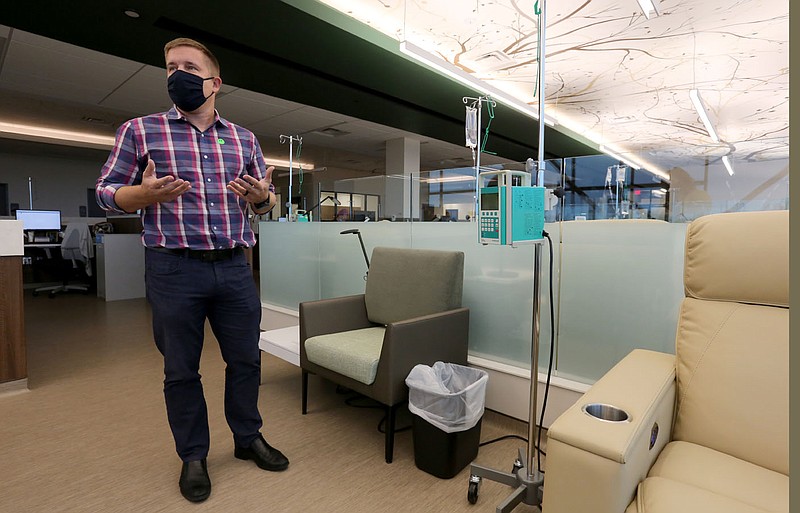 Jeff Hunnicutt, chief executive officer of the Highlands Oncology Group, stands in the chemotherapy room as he describes Monday, October 26, 2020, the new facility located at 3901 Parkway Circle in Springdale. Check out nwaonline.com/201101Daily/ and nwadg.com/photos for a photo gallery.(NWA Democrat-Gazette/David Gottschalk)

The new space allowed Highlands to offer more of the same clinical services and consolidate its business offices, freeing up more space at the two other clinics, said Jeff Hunnicutt, chief executive officer.

"We've had a history of keeping up with growth or even staying ahead of it, so we don't get to the point where we feel like we're busting at the seams, and this building is the next step of that," he said.

Hunnicutt explained that most of Highlands' business offices, such as administration and billing, were spread out in different buildings in Fayetteville and are now at the Springdale clinic. Programs such as physical therapy and lung cancer screening also moved to the new office.

"You just get more done when you're in close proximity," Hunnicutt said.

Highlands Oncology Group is a for-profit business that generally sees more than 400 patients a day total at its three Northwest Arkansas clinics. While diagnostics are widely available in the area, Highlands accounts for the bulk of cancer treatment in Northwest Arkansas.

Northwest Health, which has five hospitals in the region, does not have oncologists on staff or offer treatment such as chemotherapy. Washington Regional Medical System has one doctor who treats gynecological cancers. Landmark Cancer Center in Rogers offers chemotherapy and radiation.

Mercy's infusion center in Rogers does not routinely offer outpatient chemotherapy, but can provide the treatment on a limited basis to patients who otherwise cannot afford care, according to Jennifer Cook, spokeswoman for Mercy.

Hunnicutt stressed the main reason for the new clinic is because of the region's population growth. The combined populations of Benton and Washington counties grew from approximately 464,000 in 2014 to approximately 518,000 in 2019, according to estimates from the U.S. Census Bureau.

Highlands treats patients from Northwest Arkansas as well as Oklahoma and Missouri.

Now cancer-free, she continues to travel approximately 250 miles to Highlands for checkups. The couple at one point tried a clinic closer to their home, but soon switched back to Highlands.

"We knew everyone. It took so much worry away," she said.

Highlands will likely add another 3,000 to 4,000 square feet to the Springdale clinic in the next two or three years to add proton therapy and more radiation therapy, Hunnicutt said.

"There's no reason why people in this region shouldn't be able to receive cutting-edge health care just right down the street from where they live," Hunnicutt said.

Highlands chose the Springdale spot largely because of population density and proximity to Interstate 49, making it easy for patients to travel to the clinic, he said.

"The writing is on the wall for this particular area to become a health care hub for Northwest Arkansas," Hunnicutt said of the Springdale location.

The clinic is about a mile south of Arkansas Children's Northwest, which opened in 2018. An Arkansas Blue Cross Blue Shield office building is under construction in the area, and Mercy Health System in 2019 opened a clinic with several specialties and an emergency room a few miles north along Interstate 49.

The Highlands clinic in Springdale added about 40 positions, including about 20 nursing, medical assistant and lab technicians. Highlands has not hired any additional medical oncologists since opening the Springdale clinic. The oncology group has 11 oncologists on staff, two of whom were hired in 2019. Highlands is on track to hire another oncologist in the summer, Hunnicutt said.

Highlands has not laid off or furloughed staff as a result of the covid-19 pandemic. Hunnicutt explained oncology didn't see the drop in patients that many specialty medical areas did. The clinics halted visitation, implemented virus screening policies and allowed patients to see their doctors via telehealth visits. However, patients and their doctors continued to decide treatment plans such as radiation or chemotherapy, which have to be performed in the clinic. 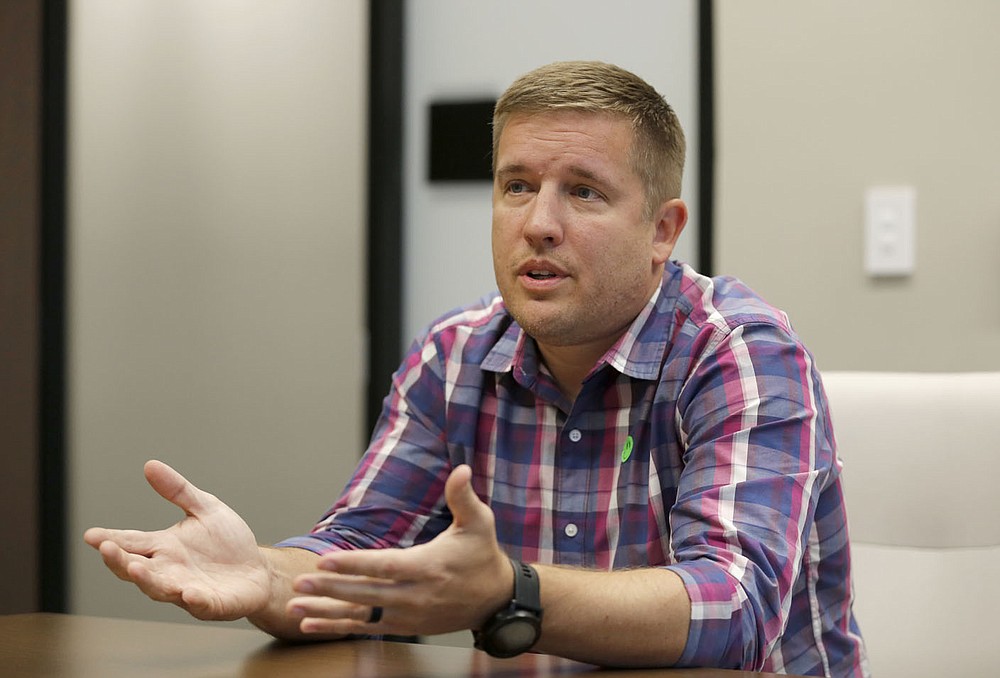 Arkansas had the 10th-highest rate of new cancer cases in the United States in 2017. The state had more than 17,400 cases of cancer.