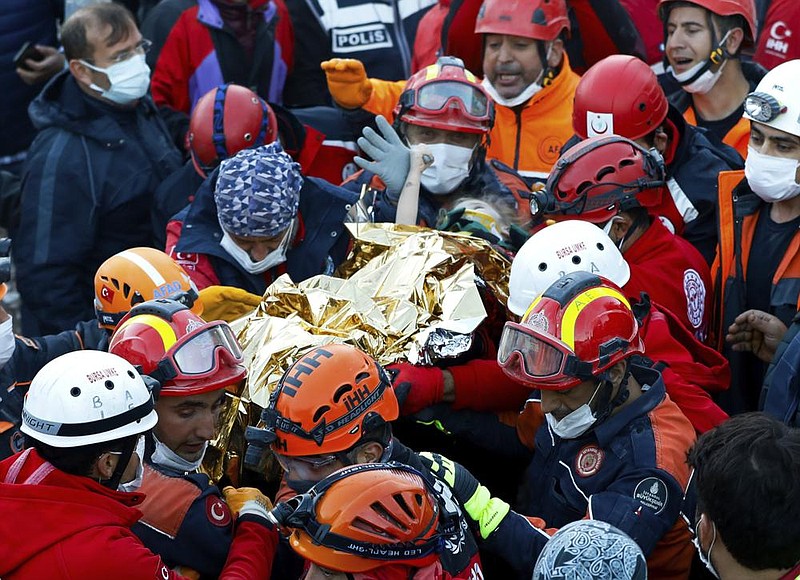 IZMIR, Turkey -- Rescue teams Monday brought out two girls alive from the wreck of their collapsed apartment buildings in the Turkish coastal city of Izmir, three days after a strong earthquake centered in the Aegean Sea hit Turkey and Greece.

More than a thousand people were injured in the quake, which was centered in the Aegean Sea, northeast of the Greek island of Samos. It killed two teenagers on Samos and injured at least 19 people on the island.

Rescue workers clapped in unison as 14-year-old Idil Sirin was removed from the rubble after being trapped for some 58 hours. Her 8-year-old sister, Ipek, did not survive, NTV television reported.

Seven hours later, rescuers extricated 3-year-old Elif Perincek, whose mother and two sisters had been rescued two days earlier, from another toppled building. The child spent 65 hours in the wreckage of her apartment and became the 106th person to be rescued alive, the state-run Anadolu Agency reported.

Many buildings were completely reduced to rubble or saw several floors pancake in on themselves in Turkey, which has a mix of older buildings and cheap or illegal construction that do not withstand earthquakes well.

ADDIS ABABA, Ethiopia -- Survivors of a massacre by rebels in western Ethiopia on Sunday counted 54 bodies in a schoolyard, the latest attack in which members of ethnic minorities have been deliberately targeted, Amnesty International said Monday.

Human-rights groups are asking why federal soldiers left the area just hours before attackers moved in and targeted ethnic Amharas.

Ethiopia's prime minister, Abiy Ahmed, denounced the killing of people based on identity, adding that security forces had been deployed to the area and "started taking measures."

Ethiopia's government blamed a rebel group, the Oromo Liberation Army, for the attacks in the far western part of Oromia, in an area bordering South Sudan and a few hundred kilometers from the capital, Addis Ababa.

CAIRO -- Military leaders from Libya's warring sides met Monday in the oasis town of Ghadames, the United Nations said, for the first face-to-face talks in Libya since last year's months-long attack on the capital by forces loyal to the country's east-based military commander.

The discussions are also the fifth round of U.N.-brokered talks, less than two weeks after the two sides inked a permanent cease-fire in Geneva on Oct. 23, a move the U.N. billed as historic after years of fighting that has split the North African country in two.

The U.N. mission in Libya said the meetings would last through Wednesday and discuss implementing and monitoring the Geneva cease-fire, along with details on how to verify possible violations.

Libya is split between a U.N.-supported government in the capital, Tripoli, to the west of the North African country, and rival authorities based in the east. The two sides are backed by an array of local militias as well as regional and foreign powers. The country was plunged into chaos after the 2011 NATO-backed uprising that toppled and killed longtime dictator Moammar Gadhafi.

Fighting has died down over the past months amid international pressure on both sides to avert an attack by the Tripoli forces on Sirte, the gateway to Libya's major oil export terminals, and to start talks aimed at ending the years-long conflict.

Gunfire broke out in Vienna on Monday night, and the police said at least one person was killed and several people were wounded. A government official said that at least one of those shot was a police officer, and that a gunman had been captured.

At least 15 people were wounded in the attack, according to a spokesman for the local hospital association. It was unclear how serious the injuries were.

He called the episode a terrorist attack.

The shooting took place in the heart of the Austrian capital, hours before the midnight start of a nationwide lockdown, one of several being imposed in Europe to stop the spread of the coronavirus.

The area where the shooting took place is packed with bars and Vienna's main temple, the Seitenstettengasse synagogue, but it was not clear if they had any connection to the violence.

Police officials described a chaotic situation, with several "exchanges of shots." Emergency vehicles blocked off streets and a streetcar line through the area was shut down.