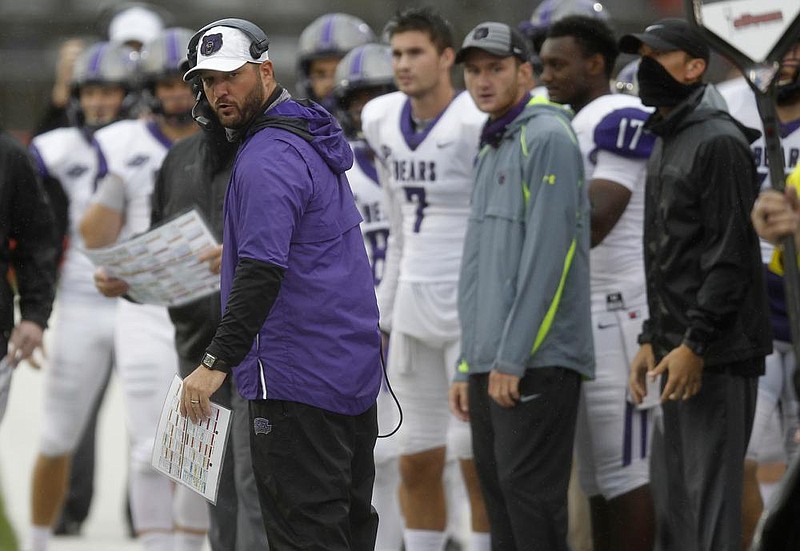 CONWAY -- Sophomore wide receiver Tyler Hudson shrugged his shoulders last week when asked what he and his University of Central Arkansas teammates were expecting from Division II opponent Missouri Western.

Hudson was right on both accounts.

Saturday's game against Missouri Western was close -- for 12 minutes -- but the end result was a 52-10 blowout over a Missouri Western team that was playing the first of four scheduled games.

Hudson scored twice on throws from quarterback Breylin Smith, for touchdowns of 71 and 56 yards. The first touchdown tied the game, the first of 45 consecutive points scored by the Bears (4-4) at Estes Stadium.

UCA led 38-7 at halftime, marking the first time this season the Bears held a lead going into the second half.

It marked the fourth time since the beginning of last season that UCA held a halftime lead. The Bears are 13-8 over the past two seasons: 4-0 when leading at halftime and 9-8 when behind.

UCA rallied from 7-0 deficit, but it didn't take long for the Bears to assert themselves after getting stunned by a 66-yard kickoff return and a knee injury to leading tackler Dre Matthews on Missouri Western's first play from scrimmage.

UCA went three and out on its first offensive series, then forced a Missouri Western punt, which was downed at the UCA 1.

The Bears took control after that, piling up 539 offensive yards while holding the Griffons to 162 the rest of the way.

"We played an efficient football game," Coach Nathan Brown said. "That's the thing I come out of the game most pleased with is we played with efficiency.

The Bears didn't turn the ball over while converting three Missouri Western miscues into 14 points.

Sophomore defensive end Logan Jessup of Wynne was a big part of it. He had a sack and returned a fumble 26 yards for a second-quarter touchdown to give UCA a 28-7 lead with 13:24 to go in the second quarter.

Jessup's touchdown came 14 seconds after UCA took a 21-7 lead on a 32-yard pass from Smith to Lujuan Winningham.

"The first drive, guys simply weren't making plays," Jessup said of the defense. "Weren't tackling well. You got to hone in early and make plays from the jump."

Jessup's play represented the Bears' fourth touchdown in a span of 10:36 of the first half.

"It came right to me," Jessup said. "Caught it, looked up and there was nothing but open field. Fortunate to be where I was."

Brown said he was pleased -- considering that UCA was coming off a last-second 31-28 loss to Eastern Kentucky the previous week -- with the entirety of the team's effort.

"Obviously, we responded to a tough week of sitting on a loss," Brown said.

The Bears complete their 10-game schedule with a Nov. 14 home game with Eastern Kentucky and a road trip to play FBS foe Louisiana-Lafayette on Nov. 21.

Brown said he started to feel comfortable after the Bears scored on drives of 99 and 93 yards, both ending in touchdown passes from Smith to Hudson.

"You get backed up, it's a recipe for disaster," Brown said. "We know we have talent on offense. So when we get confidence, we're pretty darn good."

But UCA impressed him.

"That was a really good football team," said Williamson, who spent 2007-2013 as a UCA assistant. "That's what I want, our kids to play against the best. I told our kids we played a very phenomenal football team. We got better as a program because of that. We're going to get better."

Williamson received emergency help from three volunteer coaches, including Hud Jackson, the head coach at the University of Arkansas-Monticello, which is not playing football this fall.

Jackson said he got a call Thursday night from Williamson.

" 'Man, my defensive staff is gone, I need some help,' " Jackson said of the words from Williamson. "I just stood on the sideline. He had to call the defense tonight, which is different for him."

It had been nearly a year since Jackson had been on the sidelines, since the Boll Weevils' final game of 2019.

"That was cool," Jackson said. "I don't know if my wife was too crazy about that. But these are crazy times."