A roll of stickers awaiting distribution to early voters sits on a table at the check-in station at the Pulaski County Courthouse Annex in Little Rock.

The last day of early voting at the Jefferson County Courthouse looked a lot like the first day with voters standing in lines that at times extended around the side of the building and out of sight.

In all, 15% more voters showed up to vote early this year than showed up four years ago, according to Jefferson County Clerk Shawndra Taggart.

It was brisk business, as cars lining Barraque Street waited their turn to get into the courthouse parking lot.

As they waited, campaigners holding signs waved to the drivers and occupants and asked for support.

Once the drivers were parked, they and their passengers headed to the lines, which moved quickly but still managed to back up from the crowds.

"I just haven't had a chance to get up here," said James Beard, 58, as he stood outside on a cool, sunny day. "I've been trying for the last week or so."

Asked if he was excited about today's election, he said he was.

Joshua Buckhan, 23, who was standing a few social distances behind Beard, said he was not very enthused about the races, a sentiment echoed by Kerrell Green, 27, who was waiting on someone else to vote and said he was going to vote today.

"It's kinda weird," he said. "Arkansas will always be a Republican state so I'm not excited at all. Trump is going to win [Arkansas]."

Asked why he didn't go ahead and vote on Monday, Green said he hadn't brought his identification and needed to get to work.

"I'm just going to vote tomorrow and go home," he said. "That's about it."

Katherine Varnell, 71, however, was eager for Tuesday to get here. Asked how excited she was, she said "it's pretty high."

"I just feel like we have got to get something done," she said, adding that she was more interested in Arkansas issues and local races than anything happening in other states or nationally.

"We've got to look out for Arkansas first," Varnell said, "and then do whatever we can to help the national status."

When asked if she was going to be watching the returns tonight, she said absolutely.

"You better know I will," she said with a laugh. "I can't hardly wait to see what happens tomorrow."

Two campaigners were tirelessly holding their large signs out front and waving to would-be voters as they made their way to the courthouse.

Susan Norton, whose husband Mac is running for circuit judge, said that today, their volunteers would be fanning out across Jefferson and Lincoln counties to campaign at specific precincts. Numerous people, she said, were still asking how they could volunteer to help, such as holding signs, but she said the campaign had run out of signs.

About 50 feet away was Therese Free, Norton's opponent in the race. Free said her hands were tired from holding the signs, especially as Monday's breeze pushed it back and forth in her grip.

"A couple more hours here today and then tomorrow and it'll be all over," Free said.

Asked if she would run again, she said yes but that she was happy the end was near.

"We have met a lot of nice people in this county and in Lincoln County too," she said, "but I will be glad for it to be done."

There is no voting today at the courthouse, but Taggart said her and her staff's work is far from over.

"The phones will be ringing off the hook tomorrow with people asking where to go vote," she said. "After Tuesday, we should all get to rest a little. It's all good." 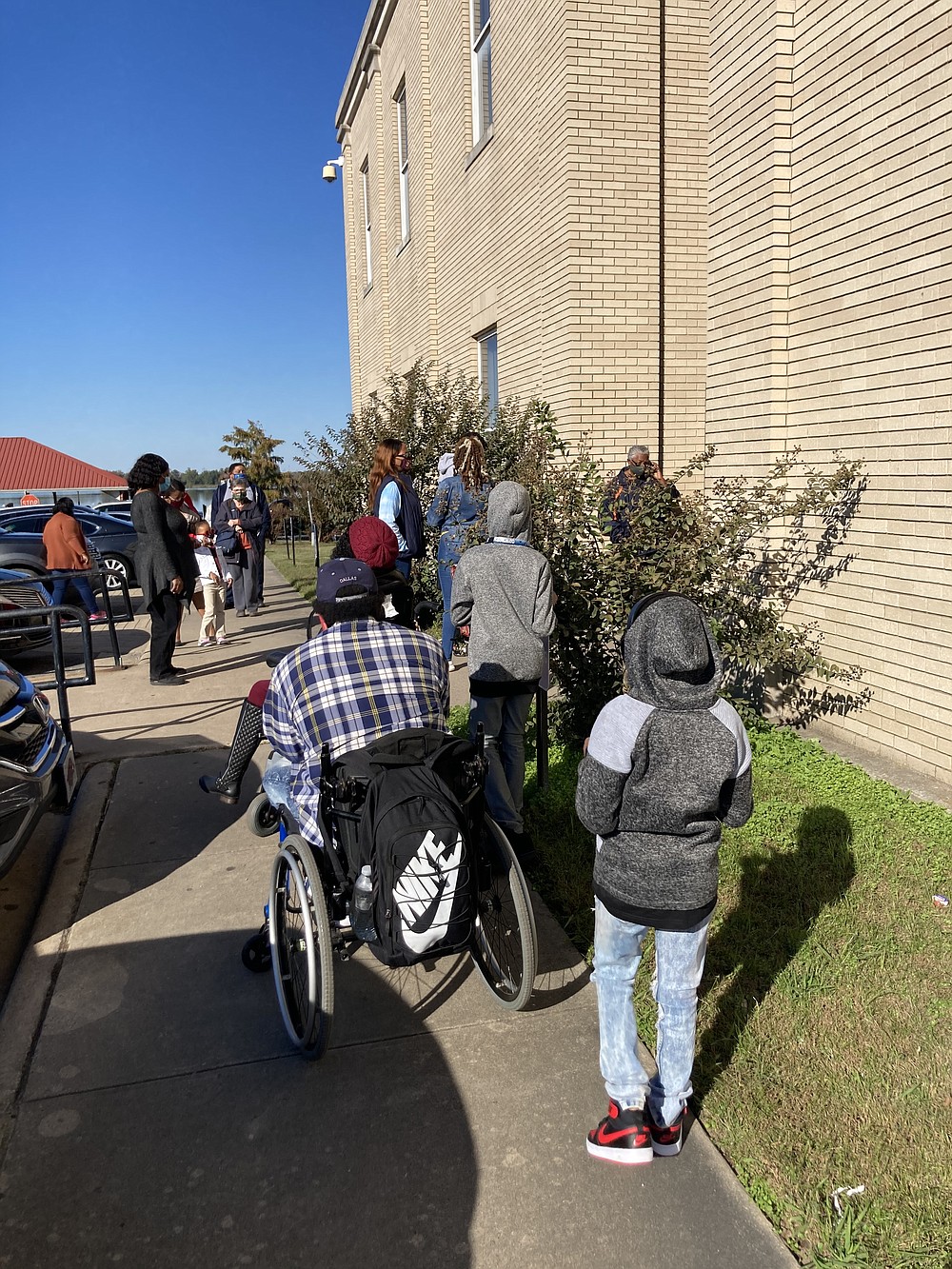 Voters stood in line on Monday to take advantage of the last day of early voting ahead of the General Election today. (Pine Bluff Commercial/Byron Tate)
ADVERTISEMENT